Is the U.S. Prepping to Airstrike Iran? 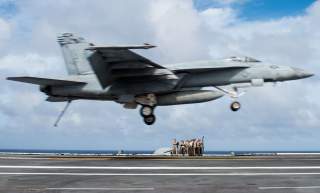 Daniel McCarthy correctly observes in The National Interest that this presidency bears more resemblance to Bill Clinton’s than Richard Nixon’s: a principal short on probity in affairs sexual and personal financial, but one who is, so far, overseeing a rip roaring economy and largely conventional foreign policy.

Amidst convulsions in the chattering classes about Michael Cohen and Paul Manafort and ouster from office, another parallel lurks: much like the Clinton administration, this White House quietly assesses an unsavory Middle Eastern government as its preeminent challenge.

This time it’s Iran, not Iraq, of course. But as 2018 closes, the U.S. is nearing the twenty-year anniversary of an oft-forgotten event in history: Bill Clinton’s airstrikes on Saddam Hussein’s regime in December 1998. The 42nd president explained the strikes, which killed over one thousand of Saddam’s Republican Guard, from the Oval Office: their mission was “to attack Iraq's nuclear, chemical and biological weapons programs” but also “its military capacity to threaten its neighbors.” Their purpose was “to protect the national interest of the United States, and indeed the interests of people throughout the Middle East and around the world.”

As I’ve previously pointed out, the Trump administration officially maintains its policy is to seek change in the Iranian regime’s behavior, not necessarily change in the regime itself. But top hawks flying in the president’s orbit disagree. Ali Safavi of the National Council for Resistance of Iran (NCRI), associated with the MEK, has told me: “We welcome the call for the Iranian regime’s change of behavior at home and abroad as that would lead to its definite demise.”

But if protests combined with a torrent of financial pressure don’t collapse the clerical government in Tehran, or if President Hassan Rouhani’s government (infuriated and humiliated at home by U.S. secession from the Iran deal) flails out militarily, might the U.S. entertain military action? As I’ve written before, those seeking change in Iran near-universally see the parallel here as 1989 and the collapse of the Soviet Union, not 2003 and the military decapitation of the government in Baghdad.

But a hybrid option exists -- select airstrikes on the 1998 model -- to further squeeze the Iranians. Regime opponents like NCRI and MEK insist this will not be necessary if Tehran is isolated enough. But precision military strikes have been, quite subtly, floated before by those in and around the Trump administration as a failsafe.

Prior to his return to power this spring, John Bolton, now national security advisor, wrote last summer in National Review what he thought the world should look like after U.S. nullification of the JCPOA: “With Israel and selected others, we will discuss military options.” He urged delivery of F-35s to Jerusalem. Walter Russell Mead at The Wall Street Journal, who has been cited as Steve Bannon’s favorite columnist and is perhaps the most prominent foreign policy thinker in the country at least open to this administration, has written if the Iranians respond to the JCPOA abdication “by restarting their nuclear program” that “Israeli-American airstrikes could both stop the process and inflict a humiliating blow to the regime’s prestige.”

So is this actually in the cards? On this administration, two prime theories of the case abound.

In one reading, this is a Republican administration going through the motions of being reflexively hawkish. Adherents to this interpretation notes that all of the major presidential candidates for the nomination, even restrainer Rand Paul, opposed President Obama’s nuclear deal. This is the fear of hardliners like Frank Gaffney of the Center for Security Policy (CSP), friendly with the administration. He has called for the diminishment of Brian Hook, newly named the State Department’s pointman on Iran’s malign activity.

“Iran’s foreign minister marked the 65th anniversary of an American-backed coup that toppled a hostile and oppressive government in Tehran by vowing that the United States’ new ‘Iran Action Group’ won’t have the same effect. He’s likely right,” Gaffney said in an email message to subscribers last week. “If President Trump wants to help the Iranian people liberate themselves from a Sharia kleptocracy that oppresses them and threatens us and wants the Action Group to do that, putting Brian Hook in charge ensures it won’t happen. Hook is deeply hostile to Trump and has, to date, used his top job at State to save the Obamabomb deal, and prop up Iran’s regime.” This is quite a statement for foreign policy restrainers, a Mitt Romney alum generally considered a dependable hawk. But for Gaffney and other hardliners, not so.

“The potential for an unprovoked attack on Iran exists, but I think it’s less than 10 percent,” a former senior U.S. military officer friendly with the administration and leading Republicans told me Thursday. Bolton this week said the U.S. goal was to drive Iranian oil exports down to zero, and announced that U.S. rejected a Tehran-proposed compromise plan to swap sanctions relief for a drawback in Syria. But Bolton, in Israel, also reported that U.S. sanctions on the country had already been more effective than expected, seeming to pour cold water on imminent, further action.

A second reading of the current situation, however, sees continued confrontation with the government in Iran as, slowly but surely, well on its way to becoming the prime legacy of this administration’s foreign policy. And this approach risks military confrontation, say these skeptics, who were unsurprised to see the Iran deal nixed by Washington, and the so-called “adults in the room” like defense secretary James Mattis lose out. They see recent events as just the beginning, and find the 1998 example apt, especially with an American population afflicted by the “Iraq syndrome.” A major confrontation would be not be pretty, and very possibly unnecessary as the regime is roiled by its most significant internal crisis since the Green Revolution nearly a decade ago. A 2017 Rand. Corp report assesses, as veteran defense reporter Mark Perry notes, that an outright war would require the U.S. to deploy “nearly half of its fighter squadrons.” The U.S. “could do it, but just barely,” as the military destruction of the regime would likely prove just the start of major U.S. involvement. A more targeted approach, therefore, could eventually prove attractive, if it came to it. A top aide to a senior Democratic senator has expressed the view before. He told me Thursday that Iran will continue to be a major agenda item for the administration for a “whole set of reasons.” For one, “you’ve got Fleitz” in there, the aide says, referring to Fred Fleitz, John Bolton’s top appointee and the national security council chief of staff. Fleitz was previously Gaffney’s chief of staff. Fleitz, a former CIA officer, served with Bolton at State. In an amusing anecdote, a former State official who served during this period recalls that Fleitz used to show State Department personnel his CIA ID and tell them: “You know who I really am, right?”

And a possible “danger is a ‘Gulf of Tonkin’ event,” Douglas MacGregor, a favorite of television host Tucker Carlson who has been floated to be Trump’s national security advisor before, told me Thursday. “Based on the report of an incident that never occurred, Trump could be railroaded into action,” he told me. The top Senate aide notes: “You’ve got U.S. and Iranian forces in fairly close proximity, in a number of places around the region: in Iraq, in Yemen, in Syria. That just brings a number of possible crisis points.”

In the meantime, the Iranians aren’t doing themselves any favors. A mindset that they’re the aggrieved party along with clinical anti-Americanism threatens to empower the country’s hardliners and inspire riskier behavior. The U.S. this week charged two alleged Iranian agents -- Ahmadreza Doostdar (a dual U.S.-Iranian citizen) and Majid Ghorbani (a U.S. permanent resident) -- accusing them of a conducting illicit surveillance of Jewish and Israeli facilities in the United States, and well as spying on the MEK. “The Iranian regime feels so emboldened that they are bringing their spying and terror operations right into the American soil,” Alireza Jafarzadeh of NCRI told me Thursday night. “All of these terror operations are as a result of a very desperate situation that the Iranian regime is in as the uprising in Iran has continued and expanded.”