The Steady Drumbeat On Iran Continues 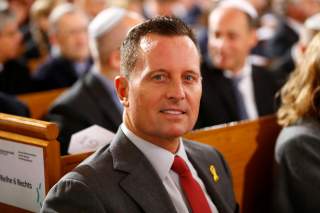 Something resembling a regime change policy on Iran is at the core of the White House’s foreign policy. Many in the hawkish contingent insist they are not building the case for war—rather, they seek to collapse the regime from within or inspire a radical change in behavior—but that’s cold comfort to those who note the hawks have made common cause with the very set that mired America in Iraq. A former senior White House official told me earlier this year that war with the country is “very” much possible.

It’s against this backdrop that recent events have transpired—and somewhat under the radar, to boot, as attention in Washington is mostly focussed on Trump’s recent, fraught visit to the G20 and the president’s spastic response to the Robert Mueller inquiry.

“The Iranian regime’s continued practice of hostage taking places it among the worst human rights abusers on earth. Congress should immediately pass the Iran Hostage Act to hold the Ayatollahs accountable for their barbarism,” Sen. Tom Cotton, a self-styled heir to Trumpism and leading Iran hawk, tweeted on Monday. “Thank you,” replied Richard “Ric” Grenell, ambassador to Germany and Trump’s pointman on Europe. For an emissary in Berlin, he’s expended an extraordinary amount of energy on Tehran, tweeting Monday: “Every news outlet in the US should be writing about [jailed American] Bob Levinson regularly. He’s the longest held US hostage - more than 11 years in Iran. [Foreign Minister] @JZarif should be asked often about all these barbaric acts.”

Doubters of the ambitious ambassador’s influence should moderate their certainty: this president eschews the usual processes, and often essentially gives whole regions—or “portfolios”—over to select officials. Secretary of State Mike Pompeo heads the North Korean effort. John Bolton, national security advisor, guides the administration on Russia and Syria. And Grenell, who the president has expressed reluctance to officially “promote” to U.N. ambassador because of the work he’s doing in Europe, is very much the administration go-to on European populism and so-called secondary sanctions on Iran—squeezing Europe to yield to American financial might, and, at least in theory, cow the Iranians. And there’s more. Said Brian Hook, Iran Study Group head at the State Department, on Monday: “We would like to see the European Union move sanctions that target Iran’s missile program.” In addition, families of Americans detained in Iran are pressing the administration hard to pull the visas of relatives alleged to be related to senior regime officials, including President Hassan Rouhani.

For those pleased with the current pace, there are potential hiccups. The first is the president. He seems intent on a more emollient course right now. He’s patched up hostilities with China in Buenos Aires, at least for now. Once the champion of military spending hikes, he is clashing with his defense secretary and going the other way. “The U.S. spent 716 Billion Dollars this year. Crazy!” Trump tweeted recently. Mattis, his precariously-employed Pentagon chief, went the other way in Ventura County this weekend at the Reagan Defense Forum, an annual meeting of traditional national security grandees.

A second source of potential setback for the Iran hawks are the fratricidal tendencies of some of its hardliners. Hook is almost no one’s idea of an Iran dove. Yet some in Washington, among them those close to Bolton, want Hook out.

“Hooray for President Trump who has reimposed sanctions on Iran to prevent one of the most dangerous regimes on the planet from becoming even more so!  Unfortunately, Mr. Trump’s bid to apply 'maximum pressure' has been undercut, yet again, by the Swamp creatures in his own administration,” Frank J. Gaffney, founder of the Center for Security Policy, said when JCPOA-induced sanctions relief was officially scuttled in November. For Gaffney, the heat on Europe isn’t scalding enough: “Brian Hook, a Never-Trumper State Department official who, incomprehensibly, is now managing U.S. policy towards Iran. Hook has insisted on what might be called a 'Europe First' approach, a product of his reflexive effort to accommodate the determination of our so-called allies on the continent to help our mutual enemies in Tehran. Brian Hook’s machinations rendered the maximum pressure campaign a 'medium pressure' one.” Whether Trump will ever be able to satisfy the most ardent Iran hawks remains an open question.