Trump Sides With the Iran Hawks on Saudi Arabia 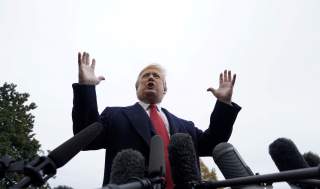 What should we make of President Donald Trump’s extraordinary White House statement on Saudi Arabia and the Middle East yesterday?

For one, it seemed to be clearly written by him (though a source close to the White House told me it was actually written so as to mimic the president’s voice and Sen. Rand Paul floated that it was written by National Security Advisor John Bolton), bespeaking a deeply-felt personal urgency and frustration over the continued fallout surrounding the murder of Jamal Khashoggi.

But it also provided the clearest distillation yet of what Trump means by “America First”—a controversial phrase with connotations evocative of the 1930s—at least as it pertains to the Middle East; Trump has used the phrase since a candidate.

“America First! The world is a very dangerous place!” the president wrote. By the third sentence, of a statement on Saudi Arabia, he is talking about Iran.

“Iran, as an example, is responsible for a bloody proxy war against Saudi Arabia in Yemen, trying to destabilize Iraq’s fragile attempt at democracy, supporting the terror group Hezbollah in Lebanon, propping up dictator Bashar Assad in Syria,” Trump said. “Iran states openly, and with great force, ‘Death to America!’ and ‘Death to Israel!’”

Trump adds: “On the other hand, Saudi Arabia would gladly withdraw from Yemen if the Iranians would agree to leave. . . . Additionally, Saudi Arabia has agreed to spend billions of dollars in leading the fight against Radical Islamic Terrorism.”

In my view, Iran, not Russia, not North Korea, is at the core of the Trump administration’s still-emerging foreign policy. On Russia and North Korea, the president’s rhetoric—though not necessarily his policies—has been far more conciliatory, especially in 2018.  And on Afghanistan, Trump has expressed a desire, like many Americans, of wanting out.

But on Iran and the greater fight for the Middle East, the president has, for now, joined the most hawkish elements in the country, who have  appropriated the phrase “America First” that many originally thought was even neo-isolationist in nature. With Tuesday’s statement, Trump has explicitly done the precise opposite of acting like an isolationist: he’s taken a side in the great power struggle in the Middle East.

A former White House official told me he thought the statement Tuesday was embarrassing and shameful, further evidence of the continued tussle in Trumpworld for this administration’s foreign policy. The president, often mercurial and self-contradictory, could yet shift his thinking. But at this moment, the American posture in the Middle East is not so much Patrick J. Buchanan as it is Frank J. Gaffney.

The controversial Washington think-tanker denied to me in August 2017 that he’d directly advised the administration. To the contrary, he’d actually endorsed and counseled Sen. Ted Cruz, Trump’s bitter primary rival, in the late stretches of the trench warfare 2016 primary (something, like most who have come over to Trump after the primary, he has sought to minimize). But in style and substance, there was no greater avatar for Trump’s statement Tuesday than Gaffney’s worldview.

Trump explicitly namechecked the Muslim Brotherhood, a career-long hobby horse of Gaffney’s, and depicted the Middle Eastern theater as straightforward. David Reaboi, an alumnus of Gaffney’s Center for Security Policy and now with the administration-friendly Security Studies Group, fleshed the statement out Wednesday morning in an illuminating radio interview. Reaboi has commented to me in this publication before; there should be no reason to doubt his sincerity. But for Reaboi, the joint action of last week’s indictments in the Kingdom of Saudi Arabia coupled with U.S. sanctions was sufficient, and it’s time to get back to business.

“Once these are punished,” Reaboi told Larry O’Connor’s radio show Wednesday. “Let’s go back to the business of regional security. Let’s go back to the business the interests of the United States and our allies. And you know, Saudi Arabia is a long-time ally, and specifically an ally against both political Islam in both the Shia and Sunni manifestations: Iran and the Muslim Brotherhood.”

That last bit is the core of the disagreement between those seeking foreign policy restraint and those hardliners who see “the interests of the United States” as thwarting “political Islam” in the Middle East. Very importantly: it also separates this ascendant cohort from neoconservatives.

The neocons and those historically under their wing—such as Sens. Lindsey Graham and Marco Rubio—have long sought a foreign policy based on morality and democratization. That’s not at all what this newer contingent wants, especially after the failures in Iraq and the political successes of organized social conservatism in the region in recent decades, the election of Hamas in Palestine and Hezbollah in Lebanon. To the contrary, this faction advises the United States to keep its thumb on the scales against democracy if it means a political Islam victorious. No regime is more willing to undertake that mission than the government in Riyadh.