On Energy Policy, All-of-the-Above Is the Only Sensible Choice 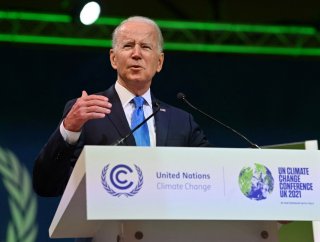 President Joe Biden needs to rethink his energy-climate-prosperity paradigm. His current thinking holds that the U.S. fossil fuel industry needs to be restrained because its carbon dioxide (CO2) emissions are causing imminent and catastrophic damage to the Earth. His solution is to hamstring the fossil fuel industry while pushing a government-financed accelerated transition to renewables. That is neither the way toward a reliable energy supply nor reduced emissions. Instead, the new paradigm should be an expansive “all-of-the-above” energy policy that promotes the growth of all American energy sources: fossil, solar, wind, nuclear, hydro, geothermal, and more.

America’s economy needs plentiful, reliable, varied, and cheap energy to remain strong. It must ensure the security and prosperity of the American people. Renewables just aren’t ready to meaningfully replace fossil fuels in our energy mix, and they won’t be for some time. Fossil fuels account for 78 percent of total U.S. energy consumption, while renewables register only 10 percent (excluding hydroelectricity). Little is expected to change in the next several decades given global energy demand growth and existing policies. According to the U.S. Energy Information Administration’s Annual Energy Outlook 2022, in 2050, fossil fuels are still expected to provide 74 percent of total U.S. energy needs, while renewables will grow to just 16 percent.

Biden no doubt would like to boost the share of renewables, so his administration has introduced a raft of policies that discourage domestic oil and natural gas production. But some of his steps are not climate solutions at all and may even increase global emissions. When Biden asks Venezuela and Saudi Arabia to increase supply while shutting down domestic producers, he is turning his back on American companies that supply cleaner energy than their foreign counterparts.

There is a national security dimension to climate policy, as well. As Biden noted in a speech on his hundredth day in office: “[T]he climate crisis is not our fight alone; it’s a global fight. The United States accounts, as all of you know, less than 15 percent of carbon emissions. The rest of the world accounts for 85 percent. That’s why I kept my commitment to rejoin the Paris Accord—because if we do everything perfectly, it’s not going to ultimately matter.”

All countries must bear the burden of fighting climate change, but not all countries have produced a strong record so far. China has been the world’s largest emitter for years and has no short-term plans to change this. According to a Rhodium Group study that ranked countries on their share of global net greenhouse gas emissions, China was first with 27 percent, followed by the United States with 11 percent, India and the European Union (EU) at about 6 percent, and Russia and Brazil producing about 3 percent each. Note that China’s emissions exceeded those of the United States, India, and the EU combined. Some Chinese companies pollute more than entire nations. The United States’ climate-energy-economic growth policies should not weaken the U.S. economy—the basis of national security—while China continues to strengthen its power projection capabilities, all the while ignoring climate considerations.

Increasing American fossil fuel production will also serve U.S. and Western interests in the face of Russian aggression. Russian president Vladimir Putin is withholding energy exports and creating economic problems for European democracies through shortages and higher prices. Biden should remove the growth-inhibiting impediments that discourage increased domestic energy production to increase availability for both Americans and Europeans and reduce global prices. Lower energy prices would help U.S. consumers and choke off the revenues with which Putin finances his wars. Further, faster approval of export terminals will help an abundance of cleaner American liquified natural gas force dirtier Russian gas off the market.

Biden has political room to maneuver on a policy change. The American people clearly want the government to focus on economic prosperity more than on climate change. In a January Associated Press poll asking Americans to pick their top priorities, climate ranked eighth of eleven choices, far behind Covid-19 and the economy. In a July Gallup poll, only 2 percent of respondents selected climate change as the top issue, while inflation and poor leadership were tied at the top at 17 percent, followed by the economy in general at 12 percent. Respondents in a January Pew Research study that presented eighteen priorities ranked the strength of the economy first and climate fourteenth. A pivot towards a new energy policy that helps both consumers and the planet is politically feasible.

Many critics will claim that dramatic changes in the climate warrant an equally dramatic makeover of the global economy. Instead of bending to specious arguments, the emerging field of climate economics provides a badly needed context to climate discussions, using facts and figures instead of adjectives to create more accurate frames of reference. Practitioners of climate economics have developed models showing that climate change is not the urgent threat to humanity’s future some make it out to be. There is no need for drastic changes in America’s economy, and there is time to develop technological solutions.

To wit: last year, two of us published an article reviewing several climate economics studies that estimated the impact of climate change on the gross domestic product (GDP) of the United States and of the world in 2050 and in 2100. The general message of these studies was that the impact of climate change on future GDP levels appears to be manageable.

This year, a white paper produced by Biden’s own Council of Economic Advisors (CEA) and the Office of Management and Budget (OMB) points in the same direction. It notes that the president’s fiscal year 2023 budget states that the American GDP twenty-five years from now will be 4.5 percent lower because of the effects of climate change than it would have been without climate change effects. But the level of the GDP will still be higher than it is today. The white paper concludes that Americans would be 1.71 times richer in twenty-five years without climate change effects but only 1.66 times richer when reflecting climate change damages. This scenario is based on research by the Network for Greening the Financial System (NGFS), an international collaboration comprised of more than 100 central banks and financial regulators.

The Biden white paper also addresses the impact of several climate change policies on the global GDP for the year 2100, again using research from the NGFS. The harshest GDP impact is under the scenario that assumes the continuation of current policies, in which case the global GDP at that time will be 13 percent lower because of climate change.

What does this mean? A 2021 UN Intergovernmental Panel on Climate Change (IPCC) study projects that without the impact of climate change, global GDP will be $529 trillion in the year 2100. A 13 percent loss reduces it to $460 trillion. If we compare these two numbers with a 2021 global GDP of $96.1 trillion, we find that the world would be 5.5 times richer in 2100 without the impact of climate change, compared to 4.8 times richer under the most severe climate change scenario. A study published in July 2020 by Danish climate scientist Bjorn Lomborg has comparable findings: “Scenarios set out under the UN Climate Panel (IPCC) show human welfare will likely increase to 450% of today's welfare over the 21st century. Climate damages will reduce this welfare increase to 434%.”

This does not mean that climate change does not matter. Nor should policymakers ignore low-probability, high-impact scenarios—a lesson we can learn from the Covid-19 pandemic. Policymakers should instead learn that the projected economic decline caused by climate change appears to be manageable and should be addressed in a cost-effective manner.

Furthermore, national, and especially global, aggregated climate projections mask large potential disparities. Moody’s Analytics Global Macroeconomic Model shows that over the next several decades, some countries will be climate winners, and others climate losers. The GDP of several developed countries in colder climates, such as Canada, Germany, and the United Kingdom, will be higher because of climate change, while that of many developing countries in warmer climates will be lower. Of course, climate change doesn’t stop after a few decades, and it is difficult to project costs several decades (let alone centuries) into the future. In many respects, climate change is risk management, and accurately communicating its risks and uncertainties is critical for policymakers to make better decisions.

The Biden administration has framed the fight against climate change as a defining challenge of the twenty-first century. Indeed, our present time is a generational moment requiring leadership, resource mobilization, and innovation on a level not witnessed since World War II—but not in the ways climate alarmists would suggest. We need bold action to develop more American energy resources and new infrastructure responsibly, expeditiously, and at a global scale. Our primary aim must be to mitigate the current global energy crisis’ effects on the American consumer and to secure American energy leadership.