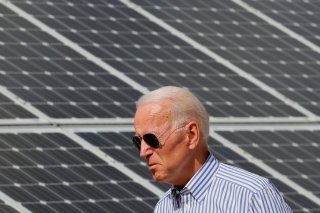 The United Nations Climate Change Conference, the world’s premier summit on climate change issues, is set to convene in Scotland on October 31. This year’s gathering, hosted by the United Kingdom’s climate-conscious government, will surely reinforce the beliefs of President Joe Biden. It will likely have a similar effect on Biden’s cabinet and many foreign leaders who view rising temperatures as not just a national security issue, but an existential crisis for humanity.

The facts, however, do not support this alarmist perspective. Careful analysis indicates that rising temperatures are a problem that must be managed, not a crisis requiring comprehensive societal transformations. The world does need prudent policies designed to mitigate the effects of manmade climate change. But these policies must not be so intrusive as to harm the American economy or cede economic and military advantages to China.

Advocates for aggressive climate policies are correct on several key points: The world is indeed getting warmer and sea levels are rising. Global surface temperatures have increased 1.02 degrees Celsius from 1880-2020. Global sea levels have risen more than eight inches since 1870, with sea levels rising nearly double the long-term average over the last twenty-eight years. The August 2021 United Nations’ Intergovernmental Panel on Climate Change’s (IPCC) Sixth Assessment Report, commenting on the rise of sea levels, said that it is “very likely” that human influence has been “the main driver of these increases since at least 1971.”

But despite the rise in global temperatures, it is inaccurate to theorize that the phenomenon is likely to lead to a sudden environmental catastrophe. To be sure, a world that is, say, three degrees Celsius above pre-industrial levels will suffer economic and societal costs, with some regions faring much worse than others. But a sudden apocalyptic transformation of the planet’s topography is highly unlikely; even the latest IPCC’s report’s summary concedes that events like ice sheet collapse, abrupt ocean circulation changes, and some compound extreme events are “low-likelihood outcomes.” As Oren Cass stated in testimony before the U.S. House Budget Committee in 2018:

If the entire brunt of a century of climate change were to land on civilization tomorrow—if a substantial share of agricultural output suddenly vanished, if sea levels were suddenly several feet higher, if regions accustomed to temperate summers suddenly experienced outdoor temperatures to which they were unaccustomed, if hundreds of millions of people were suddenly displaced—the result might well be catastrophic…

But if those changes occur gradually (as they are expected to), if they emerge in a world far wealthier and more technologically advanced than today’s (as we expect it to be), and if policymakers ensure that people have the information and incentives to plan well (something over which we have control), then climate change will impose real costs but ones that we should have confidence in our ability to manage.

The Economic Costs are Manageable

Many leading researchers agree that future temperature increases, sea-level rise, and changes in extreme weather will be costly. However, these costs will not substantially damage global economic growth and prosperity when compared to the overall size of the global economy.

In a 2018 paper, Nobel prize-winning Yale economist William Nordhaus wrote that, by the year 2100, “Including all factors, the damage equation in the model assumes that damages are 2.1 percent of global income at 3°C warming...”

A 2018 study by Marshall Burke et al. referred to in the 2019 IPCC report (p. 256) shows that a no-climate-mitigation-policy scenario under which temperatures rise by 3.66 degrees C results in a global gross domestic product loss of just 2.6 percent by 2100.

An October 2019 International Monetary Fund working paper estimates that “persistent increase in average global temperature by 0.04°C per year, in the absence of mitigation policies, reduces world real GDP per capita by more than 7 percent by 2100.”

Similarly, scientists reviewing the 2018 U.S. National Climate Assessment concluded that climate change could cost America only 1-4 percent of its GDP by 2100.

Climate scientist Bjorn Lomborg reached a similar conclusion about economic losses in 2020, writing that “Scenarios set out under the UN Climate Panel show human welfare will likely increase to 450 percent of today's welfare over the 21st century. Climate damages will reduce this welfare increase to 434 percent.”

SwissRe, the second-largest reinsurance company in the world, produced a detailed report in April 2021 on the impact of climate change. It noted that by mid-century under the current likely temperature-rise trajectories, the world temperature will be 2.0-2.6 degrees Celsius higher and global GDP 11-14 percent lower than in a world without climate change. If today’s world GDP of $85 trillion grows annually at 3 percent, it will reach $194 trillion in 2050, or 2.3 times greater than today. With climate change losses of 13 percent, the world’s GDP in 2050 will only be double what it is today.

Extreme policies to address climate change would harm economic growth and increase government intrusiveness. In its push to transition the United States away from fossil fuels as part of the drive to reach net-zero emissions by 2050, the Biden administration cancelled the Keystone XL Pipeline permit, banned new oil and gas leases on federal lands, and stopped oil and gas exploration off the Alaskan coast. These actions restrict energy supplies which, in a growing economy, raise energy prices, drive up the overall inflation rate, and burden families and businesses with higher costs for ubiquitous petroleum-based products. While not directly tied to the Biden administration’s actions, the Energy Information Administration has forecast that Americans will spend an average of 30 percent more on their heating bills this winter than last year. More money spent on energy bills means fewer dollars are available for food, healthcare, and other goods and services families enjoy. And because energy is a necessary input for nearly everything we make and do, households will be harmed multiple times over.

The cost of aggressive domestic policies might be justified if those policies permanently remedied global emissions-driven problems of global temperature and sea level increases. But eliminating all U.S. CO2 emissions under a plan like the Green New Deal would barely affect global surface temperatures. Biden too, stated this year, “[I]f we do everything perfectly, it’s not going to ultimately matter.” U.S. climate envoy John Kerry has said that even if the United States were to achieve net-zero emissions, it would be climatically ineffective. In some instances, like cancelling Keystone XL, it could arguably result in more greenhouse gas emissions if the oil is carried by rail or truck, or extracted and transported in a nation with less rigid environmental standards than the United States and Canada.

The most aggressive U.S. emissions reductions policies would only translate into marginal climate improvements worldwide because 85 percent of global emissions come from outside America’s borders, especially in the developing world. For example, India’s carbon emissions have continued to grow, and its minister of power recently remarked that net-zero is a “pie in the sky” and “you can’t stop” developing countries from using fossil fuels.

China alone is responsible for 28.5 percent of world carbon emissions, the highest percentage of any country in the world. It emits more greenhouse gases than the entire developed world combined. It is unlikely that China will act drastically to curb its emissions anytime soon. According to a recent report in GreenBiz, in China “A total of 247 gigawatts of coal power is in planning or development, nearly six times Germany’s entire coal-fired capacity.” Li Keqiang, China’s premier, said recently that China’s energy transition must be “sound and well-paced”—a quip The Economist described as “code for using coal longer.”

America must also consider the geostrategic implications of overly aggressive climate policies. The Biden administration has restricted and disincentivized oil and gas production inside the United States while urging Organization of the Petroleum Exporting Countries (OPEC) nations and Russia to increase output. The administration has also supported the completion of the Nord Stream II pipeline, which will allow Russia—currently supplying 41 percent of Europe’s gas—to increase the use of energy as a point of geopolitical leverage. As Wall Street Journal columnist Walter Russel Mead wrote recently, “the green agenda as currently conceived is an effective machine for undermining the economic and political power of the democratic world and boosting the influence of precisely the authoritarian powers President Biden has made it his mission to oppose.”

This is especially true with respect to China. China is currently the world’s leading producer of solar panels (which are often manufactured using coal as the power source), and relies in part on forced Uyghur labor for production. China is also a leading extractor and processor of critical rare earth minerals used in solar and batteries, among many other technologies. Abandoning oil and gas-powered technologies too quickly won’t just lead to the energy shortages roiling Europe right now. It will also leave American consumers dependent on China—increasingly an American adversary—for their energy generation needs.