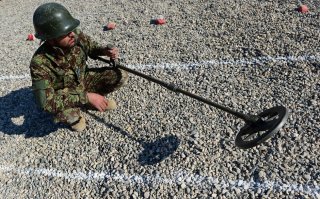 The Afghan peace process continues amidst uncertainty about the speed and totality of American withdrawal, disappointment at Taliban noncompliance, and questions about where an intra-Afghan dialogue might lead. Should Afghanistan achieve peace, though, some certainties exist, among which would be both decommissioning of Taliban forces, promoting employment to build support for the government, and preventing recidivism among those motivated more by economic desperation than ideology.

Here, the Biden administration’s support for and expansion of demining activities in Afghanistan could prove essential. In September 2020, the Trump administration allowed U.S. funding to expire, leading to the immediate layoff of thirty thousand members of the Afghan local police. Expanding demining could mitigate that loss. According to The Halo Trust, one of the world’s leading demining organizations and the largest demining organization in Afghanistan, “Afghanistan’s demining sector . . . currently employs around 5,000 Afghans (primarily men of fighting age), down from its peak of 14,000 Afghans in 2012. As a result, the sector has the capacity to rapidly expand.” In 2010, HALO led a pilot initiative that recruited 259 former Taliban and Hezbi-Islami fighters and trained them in mine clearance. Over the last decade, only one has left to return to the battlefield. Demining may be the most popular way to absorb quickly decommissioned fighters. That former soldiers and Taliban fighters know the terrain intimately is a bonus.

Demining operations are also very popular as they provide immediate benefit to ordinary Afghans, clearing Afghan land for agriculture and villages for re-habitation. At present, mines contaminate more than 580 square miles in Afghanistan, roughly half the size of Rhode Island, making that area functionally unusable. While that might seem like a small figure, decades of war have spread mines disproportionately in agricultural regions of Afghanistan and in valleys rather than in the most mountainous areas without villages, roads, commodities worth fighting over.

So much aid to Afghanistan has been money down the drain. While Transparency International ranks Afghanistan among the world’s most corrupt countries, on par with the sub-Saharan states like Burundi, Congo, and Guinea Bissau, and the U.S. Special Inspector General for Afghanistan Reconstruction (SIGAR) has uncovered hundreds of millions of dollars in waste, fraud, and abuse, its audit of demining operations in Afghanistan has shown very little waste. On Oct. 15, 2019, for example, SIGAR reported that, out of nearly $16 million in demining costs between March 2013 and September 2018, it identified only $19,000 in questioned costs, many of which simply needed further explanation. A previous demining audit covering a $14.7 State Department grant to Halo Trust covering April 2011–April 2013 flagged only 0.4 percent of the resulting spending as ineligible. Simply put, demining is among the least corrupt, most cost-effective projects that the United States has supported in Afghanistan.

The Feb. 29, 2020, U.S.-Taliban deal called on U.S. troops to leave Afghanistan by May 1, 2021. It is unclear whether the Biden administration will abide by that date but, regardless, Afghanistan peace and stability should remain a U.S. interest. President Joe Biden, Secretary of State Tony Blinken, and National Security Advisor Jake Sullivan may pride themselves on smart diplomacy. There could be no other way to start than to invest relatively modest amounts of funding into mine clearance programs that would simultaneously facilitate decommissioning of fighters, boost the economy by making land available for agriculture or other economic purposes, and show Afghans across the political spectrum that the United States remains committed to their future.