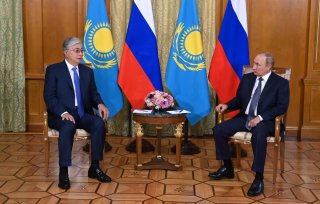 As Russia faces growing challenges in its war in Ukraine, the latest being the withdrawal of Russian forces from the city of Kherson, the conflict is producing ripple effects in unexpected areas. One such place is Central Asia, a resource-rich and strategically located region that has been a problematic and elusive partner for the United States and is dominated by Russian and Chinese influence. However, while such fortunes may be in the process of shifting, Washington will need a more nuanced and targeted strategy to align these developments in its favor as part of its broader competition with Moscow and Beijing.

Central Asia, which consists of Kazakhstan, Uzbekistan, Turkmenistan, Kyrgyzstan, and Tajikistan, has long been a difficult region for the United States to build its influence, even as it contains tremendous energy and mineral resources, and borders hotspots like Afghanistan. Unlike Eastern Europe and the Caucasus, no Central Asian states have a pro-Western orientation or sought to become members of the European Union (EU) and NATO. Indeed, three out Central Asian countries—Kazakhstan, Kyrgyzstan, and Tajikistan—are members of the Russia-led Collective Security Treaty Organization (CSTO) military bloc (with the latter two hosting Russian military bases) while Uzbekistan and Turkmenistan are officially neutral and view the United States and the West rather skeptically.

One of the major sources of skepticism stem from U.S. efforts to promote democracy and human rights in the region. Central Asian countries (with the partial exception of Kyrgyzstan) have highly centralized and authoritarian political systems and are extremely sensitive to U.S. criticism regarding their domestic conduct. This has made it difficult for Washington to build inroads in the region as it has in more democratic and Western-oriented states like Ukraine and Georgia. By contrast, Russia and China find it easier to cooperate with Central Asian governments and frequently emphasize their policy of “noninterference” in domestic affairs to distinguish themselves from the United States.

Nevertheless, Central Asian countries have previously cooperated with the United States when mutual security interests are at stake. Following the 9/11 attacks, Central Asia became an important logistical hub for U.S. and NATO operations in Afghanistan. The region served as the site of the Northern Distribution Network and the United States was even allowed to use air bases in Uzbekistan and Kyrgyzstan while it assisted with regional counterterrorism efforts against militant groups such as the Islamic Movement of Uzbekistan. This arrangement lasted for several years before the United States was forced to withdraw from its airbase in Uzbekistan following Washington’s criticism of Tashkent’s handling of the Andijan massacre. The Manas airbase in Kyrgyzstan was also closed later, largely due to pressure from Russia.

A more recent challenge for the United States that has emerged in Central Asia is China’s growing role. Central Asia is a key component of China’s Belt and Road Initiative (BRI), with Chinese president Xi Jinping officially launching the initiative in Kazakhstan in 2013. Since then China has invested tens of billions of dollars in the region to develop road, rail, and energy pipeline infrastructure. China has become the largest economic power in the region while Russia remains the dominant security player. This tacit division of labor between Russia and China has, at best, left the United States a tertiary power.

However, the effects of the Russo-Ukrainian War could alter these regional power dynamics. Russia’s invasion has not been received positively by Central Asian states and none have voted in support of Moscow’s moves at the United Nations (UN). Instead, several Central Asian leaders have explicitly criticized Russia’s war effort, with Kazakh president Kassym-Jomart Tokayev doing so in the presence of Russian leader Vladimir Putin. There are several reasons for their lack of support: the conflict has increased economic pressure on the region, there have been efforts to mobilize Central Asian migrants working in Russia to join the Ukrainian war efforts, and some Russians have fled to Central Asia to escape Moscow’s mobilization.

Additionally, China has faced challenges to its influence in the region, albeit in a less acute and immediate way than Russia. There have been protests over Chinese BRI projects due to corruption, debt, and negative environmental effects. China’s treatment of the Muslim population in Xinjiang, not only against the Uyghurs but also ethnic Kazakhs and Kyrgyz residing there, has prompted concern from Central Asian governments. While Beijing has emerged as the dominant economic player in the region, this has not translated into widespread support among Central Asian populations. Central Asia has seen its fair share of revolutions and other upheavals in recent years so popular discontent is something that regional governments have to take seriously.

The war in Ukraine and long-running political pressures present Washington with an opportunity to enhance its role in the region and whittle away at Russia and China’s positions. However, the United States needs to distinguish itself from Russia and China in a way that makes its overtures to Central Asian states more effective and appealing.

For example, the United States can distinguish itself from Russia in the security sphere by focusing on specific areas like joint counterterrorism and counternarcotics training. This could mitigate any spillover from Afghanistan without the need for permanent military bases or large-scale troop deployments. The United States can also contrast China’s economic approach, which is state-led and predominantly centered around fossil fuels, by focusing on green energy projects. Other partners can aid such efforts, including in cooperation with the EU’s regional efforts to invest in emerging technologies like green hydrogen development.

U.S. strategy in Central Asia could further benefit from a more nuanced approach to the region’s domestic political context. Washington should certainly continue to advocate for human rights and promote democracy in the region but it can do so in a way that goes beyond criticism and pragmatically works with governments to promote institution-building and civil society programs. The upcoming presidential election in Kazakhstan on November 20, which also includes constitutional changes to reduce term limits, is one opportunity for the United States to demonstrate such a nuanced approach.

To be sure, there is nothing immediate or inevitable about the decline of Moscow or Beijing’s influence in Central Asia. Despite its setbacks in Ukraine, Russia is likely to maintain its military presence in the region for years to come, and Central Asian states are unlikely to completely sever security and economic ties with Moscow. In the meantime, the United States does not have the ability nor the willingness to match the scale of China’s regional BRI investments.

Eugene Chausovsky is a Senior Analyst with the New Lines Institute. Chausovsky previously served as Senior Eurasia Analyst at the geopolitical analysis firm Stratfor for more than 10 years. His work focuses on political, economic and security issues pertaining to Russia, Eurasia, and the Middle East.