The Fear of Nationalism in Germany Is Killing Its People 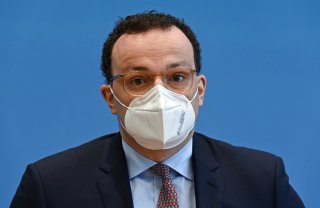 At the beginning of the coronavirus crisis, it seemed as if Germany was coping better than the United Kingdom, the United States and many other countries. In recent months, the exact opposite has been the case: the United States and the UK have two of the world’s most successful vaccination campaigns while Germany lags far behind. The deeper reason for Germany’s failings is its dysfunctional relationship with everything “national.”

Even the word “nation” is frowned upon by many members of Germany’s political class, intellectuals and media outlets. Anyone who insists that the government should put the interests of their own people first—for example in the procurement of vaccines—is immediately branded a “nationalist.” Angela Merkel’s government was very clear that it delegated vaccine procurement to the EU because of the almost paranoid fear of being labeled a “vaccine nationalist.” Governments in the UK and United States have no such fear.

The result: although one of the first coronavirus vaccines was developed by the German company BioNTech and funded with hundreds of millions of euros by German taxpayers, there is now less vaccine available in Germany than in many other countries.

The problems Germany faced during the refugee crisis of 2015–2016 had the same cause. Here, too, Merkel’s government’s actions (or failures to act) were strongly determined by its disturbed relationship with the nation. This went so far that Angela Merkel publicly declared that she could not even protect the borders of her own country.

The fight against organized crime, too, has frequently failed because of the paranoid fear that anyone who takes a tough line could be branded “xenophobic” and, thus, a “nationalist.” As a result, the crimes committed by large Arab clans, who seem to dominate organized crime in many German cities, were largely hushed up for many years. This has only changed more recently—but decades have been lost in the fight against organized crime and that is why Germany is struggling to get to grips with the problem today.

At the same time, this German complex is linked to a distinctly German megalomania, an almost grandiose hubris. This is evident in the fight against climate change. Although Germany is responsible for only 2 percent of global CO2 emissions, you could be forgiven for thinking that what Germany does will determine the fate of the entire planet. Many German politicians explicitly declare that Germany should be the role model for all other countries on the globe.

This all has echoes of the old slogan “Am deutschen Wesen mag die Welt genesen,” which means “By German values shall the world be healed.” This phrase was originally coined in a poem, Deutschlands Beruf, by Emanuel Geibel in 1861. The slogan “am deutschen Wesen soll die Welt genesen” was later employed by Germany’s political leaders, including Kaiser Wilhelm II.

The German claim to be a role model for the whole world in energy policy is all the more ridiculous because, from an outside perspective, Germany has adopted the “world’s dumbest energy policy.”

Germany is proud of its program to decommission both nuclear and coal-fired power plants, even though nuclear energy is one of the most climate-friendly energy sources and many renowned scientists are convinced that climate change cannot be solved without more nuclear power plants. As a result of irrational energy policies, electricity prices in Germany are now the highest in the world. In Germany, for example, one-kilowatt hour costs 31 cents, while in neighboring Poland the price is just 13 cents. This makes Germany a cautionary tale at best.

The refugee crisis also confirmed Germany’s missionary claim that “By German values shall the world be healed.” Merkel sincerely believed that she could get the whole of Europe to agree to open its borders. That, of course, was not the case. Like dominoes, one country after another closed its borders to illegal immigrants and Germany was left entirely isolated with its refugee policy.

The naive expectation that other countries would follow the same maxims as Germany has also been evident throughout the coronavirus crisis. German EU Commission President Ursula von der Leyen was deeply disappointed to realize that the UK and U.S. governments put the interest of their own countries first, which is a dangerous manifestation of unbridled “nationalism” from the German point of view. In life, however, disappointment is often preceded by self-deception. And in this case, it was recklessly naive to assume that the governments of other countries would also put protecting their own people at the bottom of the agenda.