The Fight Over Hagia Sophia is About More Than a Building 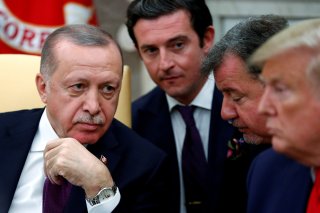 One of the architectural wonders of the world, the Hagia Sophia cathedral was conquered once before. It was converted into a mosque by its Ottoman conquerors; minarets were added, and its ancient Byzantine mosaics were whitewashed. More recently, it has functioned as a museum for decades. Now, Turkish president Recep Tayyip Erdogan has decreed that the historic Hagia Sophia church should be reverted into a mosque once again.

This aggressive move is about much more than a UNESCO World Heritage Site. It reveals Erdogan’s agenda to assert his vision for an expansionist Islamist Turkey, endangering Christians and other religious minorities in Turkey and throughout the Middle East.

Built as a cathedral by the Emperor Justinian I in 537, Hagia Sophia is still central to Orthodox Christianity. Upon the conquest of Constantinople by the Ottomans, it was converted to a mosque in 1453 as a sign of the Ottoman’s triumph and domination of the Christian population.

Centuries later in 1934, the secular founder of modern Turkey, Mustafa Kemal Ataturk, turned Hagia Sophia into a museum open to all. It had remained a museum until now. The recent change back into a mosque has upset Christian leaders around the globe who remember the Ottoman Empire’s brutal treatment of Christians. Some from the Orthodox tradition find the move traumatic.

When courts affirmed the validity of Erdogan’s plan for the cathedral, he declared, “Hagia Sophia became a mosque again, after eighty-six years, in the way Fatih the conqueror of Istanbul had wanted it to be.” Erdogan has long fantasized about resurrecting a neo-Ottoman state. This swing back toward the time of Ottoman sultan Fatih Sultan Mehmet (known as Mehmed the Conqueror) rightly alarms Christian communities throughout the Middle East because they stand in the way of Erdogan’s vision of a new empire.

Turkey’s expansionist bent is bad news for religious minorities and anyone else that does not fit Erdogan’s Islamist vision for the Middle East. When Turkey launched an incursion into Kurdish-led Northeast Syria last fall, a region known as an oasis of religious freedom and equality, it fired on civilians and forced hundreds of thousands of people to flee. In areas of Syria where Turkey remains in charge, women are forced to wear head coverings, and Yazidis have been forced to convert to Islam. Many religious minorities who fled are unlikely to return if Turkey remains in the area.

Yazidis and Christians were also targeted by Turkish military aggression in northern Iraq when Turkey led an air and ground attack against Sinjar in June. It was supposedly a campaign against the Kurdistan Workers’ Party (PKK), but PKK affiliates in Sinjar have never attacked Turkey. Those that paid the highest price were the civilians trying to rebuild their lives in this war-torn region. They are still feeling the effects of the Islamic State’s onslaught in 2014. And now, Christian villagers were forced to flee airstrikes. Everywhere Turkey moves in, religious minorities live in fear, and innocent civilians are attacked.

After what Erdogan called “resurrecting Hagia Sophia,” he promised to “liberate al-Aqsa mosque” in Jerusalem. By planning to liberate the iconic mosque in Israel’s capital, Erdogan rallies his political base by fostering dreams of the subjugation of the Jewish state. He shows disregard for the governments of regional neighbors and that is likely to raise tensions if the Turkish government continues to make public statements like this.

Inside Turkey, non-Muslims do not fare much better. At least sixteen Christian workers have been expelled so far this year. Most training for Protestant leaders is conducted by foreign workers on long-term residence visas.

These restrictions on foreign nationals participating in ministry are a direct attack on Protestant churches’ growth and well-being in Turkey. It is worth remembering that it was not so long ago that the government imprisoned American pastor Andrew Brunson for two years on bogus charges of aiding a coup attempt. The darkness of religious oppression is growing in Turkey, and that should concern us all.

When Hagia Sophia is formally reverted to a mosque later this month, it will be yet another manifestation of Erdogan’s vision for a conquering Islamist Turkey. Erdogan relishes the Ottoman empire’s history, which is a threat to religious minorities in Turkey and its surrounding countries. Ignoring Hagia Sophia’s legacy as a church and embracing its Islamist domination as a mosque is a dangerous sign pointing to Erdogan’s larger attempt to re-shape Turkey and the Middle East. Western countries should take note of the changes happening under Erdogan’s leadership. In his mind, the Islamization of the Hagia Sophia is just the beginning.

Arielle Del Turco is the Assistant Director of the Center for Religious Liberty at Family Research Council.