France Has Big Plans for the Indo-Pacific 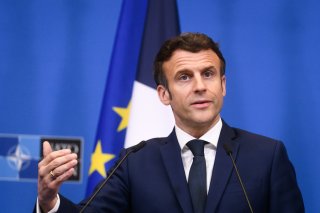 More than a year has passed since the formation of AUKUS—a trilateral security pact between the United States, the United Kingdom, and Australia—and the subsequent diplomatic crisis between France and Australia. After the initial shock provoked by the announcement of AUKUS, France had no choice but to revamp its partnership policy in the Indo-Pacific.

The dispute not only tarnished the bilateral relationship between Paris and Canberra but also complicated France’s plans in the region. Though the media initially read the French discontent as a business dispute over the cancellation of Australia’s multi-billion-dollar order for France’s Naval Group submarines, the deal was just one component of a broader strategy to anchor France into the Indo-Pacific.

Until September 2021, this strategy was supposed to rely on two legs. France’s rapprochement with India provided the “Indo” leg, while the partnership with Australia represented the “Pacific” one. This was all the more crucial because, historically, France has been more involved in the Indian Ocean than in the Pacific, and the partnership with Canberra was partly expected to fix this imbalance.

Since the AUKUS dispute, France’s Indo-Pacific engagement has taken several forms. At the bilateral level, one of the most significant developments has been France’s rapprochement with Indonesia. Over the last year, exchanges between both sides’ foreign and defense ministers have increased. In July, Indonesia’s defense minister, Prabowo Subianto, called France “Indonesia’s main strategic partner.” A few months later, French minister of the armed forces Sebastien Lecornu followed up by asserting that “a powerful strategic intimacy … is being born with Indonesia and France.” The rapprochement is not only in words: amid Indonesian plans to modernize its armed forces, France secured a deal to sell forty-two Rafale fighters to Indonesia, which may be followed by the sale of two French Scorpene-class attack submarines.

Meanwhile, France has embraced the “minilateral” approach. Back in 2020, France launched a trilateral dialogue with India and Australia, but it came to a halt after the AUKUS crisis. However, on the sidelines of the UN General Assembly last September, French diplomats met with their counterparts from India and Australia in order to revive that framework.

Seen from Paris, the replacement of Australian prime minister Scott Morrison by Anthony Albanese after the May 2022 election was a precondition for restoring those ties. Then, a July visit by Albanese to Paris helped relaunch French-Australian dialogue at the highest level. French president Emmanuel Macron even suggested that year that the submarine deal was still “on the table” if the new Australian government was open to the idea (it isn’t so far). The sense of “betrayal” around the AUKUS dispute left deep scars in the French foreign policy establishment and the president’s entourage. Although bilateral consultations may go on, there are no expectations for the time being that France will reconsider the partnership with Canberra as a pillar of France’s Indo-Pacific strategy.

Interestingly, another trilateral gathering occurred during the UN General Assembly in New York. On the sidelines of the General Assembly, India, France, and the United Arab Emirates (UAE) held their first meeting together. That trilateral partnership truly grew in earnest after the AUKUS debacle, though French officials carefully reject any causation between the two events and emphasize that the rapprochement among the three countries had been in the making for several years.

The UAE has hosted France’s naval command for the Indian Ocean since 2009, along with about 800 French troops. Coincidentally, on September 15, 2021, the day AUKUS was announced, Macron hosted the Emirati leader, Mohammed bin Zayed, who has his own grievances with the United States. Three months later, amid the suspension of contentious F-35 talks between Abu Dhabi and Washington, the UAE announced its intention to purchase eighty French Rafale fighter jets. In the meantime, the Emiratis and the Indians have also turned their relationship into a strategic partnership that now involves counterterrorism cooperation and major Emirati investments in India’s infrastructure. By 2021, the navies of the three countries held joint drills in the Persian Gulf.

It is too early to say how far this nascent trilateral bloc can go. France appears eager to promote talks on joint defense industrial cooperation, especially as the Dassault company produces Rafale fighter jets for both Abu Dhabi and New Delhi. There is also the possibility of greater consultations in the field of maritime security in the Indian Ocean, though the UAE’s limited naval capabilities may constrain such ambitions.

France’s Indo-Pacific strategy has also taken a more ambitious character at the multilateral level. In the past two years, Paris deepened its engagement with regional organizations. In 2020, it became an official member of the Indian Ocean Rim Association, making the case that its territories in the area—La Réunion and Mayotte—made it a sovereign state of the region on par with Bangladesh or Sri Lanka. In November 2022, France also gained the status of observer state in the ASEAN Defense Ministers’ Meetings Plus, ASEAN’s platform for military consultations with external partners such as Australia, India, and the United States.

Furthermore, in November 2022, Macron was the first European leader to deliver a speech at the Asia-Pacific Economic Cooperation forum’s​​ summit in Bangkok, allowing him to highlight the French approach towards the region, often described by the expression “balancing power,” or “puissance d’équilibre,” a concept as vague in English as it is in French.

French officials insist that Paris rejects the notion of “confrontation” between great powers in the region. The goal of France’s Indo-Pacific strategy is not to counter China but to promote partnerships focused on common interests rather than common threats. Such French rhetoric plays as a barely veiled critique of the American posture, perceived in Paris (as well as in some Asian capitals) as too polarizing.

Recent initiatives such as the rapprochement with Indonesia, the launching of the UAE-India dialogue, and the resurrection of the dialogue with India and Australia have built new momentum for France’s Indo-Pacific strategy. Admittedly, the partnership with Abu Dhabi and New Delhi has its own limitations—it can strengthen France’s presence in the Western Indian Ocean but hardly beyond that area. This is again what makes France’s partnership with Canberra so crucial.

As a result, France is still reviewing ways to enlarge its partnership policy. Some observers speculate that Indonesia could join the India-UAE framework. In addition to its recent rapprochement with France, the Southeast Asian country has also cultivated close ties with both India and the UAE. Singapore is also frequently mentioned, especially due to its significant diplomatic and military cooperation with Paris. As it maintains a carefully balanced posture between the United States and China, Singapore may also find France’s rhetoric more appealing than the current stance in Washington.

Eventually, in this search for local partnerships to shore up its Indo-Pacific strategy, France must confront two fundamental questions. The first relates to its ability to shape the local environment. Asian policy circles remain skeptical about the military and economic might a country like France can deploy to the Indo-Pacific when compared to great powers like Washington and Beijing. Paris is well aware of the need to address this credibility gap and announced in the past year new naval deployments to increase its presence in Asian waters. French military expenditures are also expected to rise, but those are driven less by Asia’s security challenges than by Russia’s invasion of Ukraine. No one in Paris is under the illusion that France could match American and Chinese capacities. Instead, the goal is to maintain sufficient resources to lead Asian middle powers to consider the French proposal as a true alternative. Defining this level of sufficiency remains unclear, however.

This brings about the second issue facing Paris, which relates to the need to clarify its regional posture. Although French diplomats boast the distinctive nature of the country’s Indo-Pacific strategy vis-à-vis the United States, catchphrases such as “Paris’ third way,” “balancing power,” or France as “a power of initiatives“ are not compelling. They may look like shallow statements hiding an absence of concrete objectives or, worse, could be dismissed as lofty rhetoric disguising the true priority of Paris—i.e., weapons sales.

France’s Indo-Pacific policy is not as different from America’s as its rhetoric suggests. France remains a NATO ally of Washington and has similarly highlighted China’s assertiveness in the South China Sea and its predatory investments in Asia and Africa. Furthermore, when working with an American audience, France tends to tone down the talk of its “third way,” promoting its Indo-Pacific strategy as complementary to Washington’s. It is a difficult enterprise for France to position itself as an alternative foreign policy player to the United States while also persuading Washington that this approach benefits both countries.

Ultimately, the credibility of France’s capabilities and intentions is an interrelated issue, and the key to solving it may lie in its ability to its Indo-Pacific strategy. Under this approach, the EU would provide resources that France cannot offer on its own, possibly supporting the ability of Europe to act as a true alternative to U.S.-China competition. For French diplomats, this means they must keep the EU engaged in Asia at a time it is focused on the war in Ukraine. In other words, the future of France’s Indo-Pacific strategy may be played out in Brussels just as much as in Asian capitals.