The Geopolitics of Combatting the Coronavirus 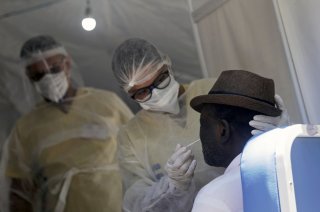 The scientific search for a vaccine against the coronavirus is entering its final stretch, but the race to reap its geopolitical benefits has only just begun.

In August 2020, Russia’s Gamaleya Research Institute of Epidemiology and Microbiology registered what was then the first-ever coronavirus vaccine candidate: Gam-COVID-Vac, better known by its trade name Sputnik V. “To my knowledge, this morning the first-ever vaccine against the new coronavirus infection was registered,” said Russian president Vladimir Putin. “I know it is quite effective, forms stable immunity and, I repeat, underwent all required trials.”

The Kremlin’s announcement was overwhelmingly negatively received by western observers. “This is all beyond stupid,” a virologist at New York City’s Weill Cornell Medical College told the New York Times. “Putin doesn’t have a vaccine, he’s just making a political statement.”

German health minister Jens Spahn said that he was skeptical about “what’s going on in Russia,” adding that the proliferation of an unvetted vaccine stands to do more harm than good. Both the United States and the European Union have sunk colossal resources into their own respective, government-sponsored vaccination projects. Meanwhile, Russian partners including China and India congratulated Moscow on being the first to register a vaccine—up to fifty countries have since expressed interest in importing Sputnik V. “The media’s voicing of concerns over the [Russian] are unfounded and stem from the global competition Russia and the United States, not scientific data,” Hadassah Medical Center Director Zeev Rothstein told Israeli newspaper Haaretz. Moscow and Tel Aviv are negotiating the possible mass distribution of the Russian vaccine in Israel, with the Hadassah Center ordering 1.5 Sputnik V doses last month.

China, likewise, claims to have a proven vaccine to sell to the rest of the world. The United Arab Emirates has already approved the Chinese vaccine’s emergency use among medical workers, with Indonesia trialing the vaccine for potential mass-distribution. Chinese state-run outlet Global Times has joined in on the vaccination messaging war, contrasting China’s “real leadership” in global vaccine distribution to the selfishness and “nationalism” of the West: “tragically, in parts of the Western world, the race for a vaccine has become less about health and safety, and more about nationalism. The United States, for example, has refused to join more than 180 other countries in a World Health Organization-organized initiative called Covax . . . Now, the Western world generally, and the US specifically, can either continue to blame and malign China, or join it to help develop and distribute life-saving vaccines around the world.”

Even as the major international players try to discredit one another directly, they are also taking steps to discourage their allies from importing adversaries’ vaccines. Despite relations between the two governments cratering at an all-time low, Ukraine’s health minister Maksym Stepanov did not categorically rule out importing the Russian vaccine as late as October 13: “I believe that, if that were to happen, then we would discuss purchasing any vaccine, not only the Russian one,” he said when asked if Ukraine would import Sputnik V in the event of it being deemed safe by the World Health Organization (WHO). Pro-Russian opposition parties and politicians in Ukraine have likewise called on Kiev to set aside its ongoing territorial conflicts with the Kremlin in order to import Sputnik V, which is being jointly produced in neighboring Belarus.  Later in October, Stepanov attended a dinner hosted by Chargé d’Affaires at the U.S. embassy in Ukraine Kristina Kvien. The U.S. embassy in Ukraine headlined the dinner with the following tweet: “CDA Kvien hosted a constructive and collegial dinner with Minister Stepanov yesterday, sharing perspectives on fighting COVID-19 and health sector reform. Ukraine will NOT be buying Russia’s COVID vaccine, which has not passed clinical trials for safety!” Over the coming week, Ukraine’s health ministry issued a statement formally renouncing any intent to negotiate a possible Sputnik V import deal.

A parallel scenario is playing out in the European Union. Last month, Hungary became the first EU member to announce a limited trial run of Sputnik V. Budapest’s decision was roundly condemned by the European Union machinery. “This is where the authorisation process and vaccine confidence meet,” the European Commission balked via public statement. “If our citizens start questioning the safety of a vaccine, should it not have gone through rigorous scientific assessment to prove its safety and efficacy, it will be much harder to vaccinate a sufficient proportion of the population.” The commission issued two additional demands earlier this week: the Russian vaccine must not leave Hungary’s borders, and Budapest will be held liable for any and all complications arising from the trial. Budapest’s decision to unilaterally import Russia’s vaccine threatens the cohesion of the EU’s bloc vaccination strategy, which seeks to distribute millions of EU-produced vaccines among all the EU member states. The commission is especially concerned that Hungary’s behavior might set a precedent for other member states—notably Greece—where non-EU-approved vaccines enjoy widespread public interest.

As the global scale of the coronavirus pandemic became clear in early 2020, some augured a kind of springtime for multilateralism; a coming era of international cooperation to combat an unprecedented public health danger. Instead, the pandemic catalyzed a new wave of great-power competition. Now, the production and distribution of coronavirus vaccines are poised to become the latest victims of relentless geopolitics.