Germany And America Still Need One Another 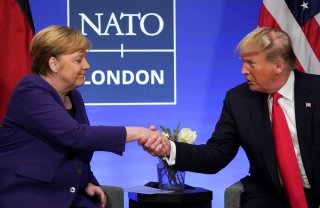 One of the great successes of American diplomacy has been Germany’s transformation from one of our greatest enemies into one of our closest allies. That success was crowned thirty years ago when the United States helped the Germans achieve the peaceful reunification of their divided country.

Germans and Americans have become indispensable partners. Our societies remain deeply bound to each other culturally, politically, and economically. Our economies form the core of a $5.6 trillion transatlantic commercial relationship that employs more than 15 million people. Our two countries are the heart of our alliance through NATO, our partnership with the European Union, and efforts to build a Europe that, in the words of former President George H.W. Bush, could be truly “whole and free.” When we agree, the German-American partnership is often a motor driving international efforts to tackle global challenges. When we disagree, we are often a brake to such efforts.

Thirty years on, however, the German-American partnership is experiencing a period of transformation and redefinition that is likely to be profound for both sides of the Atlantic.

First, the societal foundations of our partnership are shifting. Americans overall have a quite positive view of Germany, but they pay little attention to German domestic dynamics and are mystified by the complexities of the European Union. Many Germans, in turn, have little connection to, or understanding of, the new communities active in U.S. domestic and foreign policy debates. They are regularly surprised by American society’s twists and turns. Generational divisions are also apparent. Many older Germans identify with an America that contained Soviet power, ensured Germany’s security, promoted European reconciliation and integration, and served as a steward for Germany’s peaceful unification. Many young Germans harbor other associations: the Iraq war, Guantanamo and Abu Ghraib, NSA surveillance, rapacious capitalism, rampant gun violence, withdrawal from international commitments, suppression of migration, and endemic racial injustice.

The consequence is that Americans have come to expect more from unified Germany at a time when Germans have come to expect less from America. The greatest transatlantic deficits we face today are not trade imbalances, digital divisions or military capabilities, they are disparities in sentiment, attention, expectation, and trust.

Germany, the country that once epitomized Europe’s divisions, is once again the linchpin of a continent in tremendous flux. Even before the arrival of COVID-19, Germany’s role had become significant. It has been ranked the most admired country in the world in the last three annual Gallup polls. Its continental clout has been enhanced by Britain’s decision to abandon the European Union. Its economy continues to drive Europe’s prospects. Its response to the coronavirus has been quicker and safer, and its recovery likely faster, than that of most of its neighbors.

Historically, Germany’s great weight radiated uncertainty. Today, Germany’s history-bending challenge is to use its centrality to generate confidence for Germans and their neighbors. Berlin’s decision this year to overcome its strongly-held aversion to budget deficits to bail out its less fortunate European partners helped to rescue the continent from a potentially historic meltdown. Yet many Germans are plagued by self-doubts and uncomfortable with the potential costs and consequences of such a high-profile role.

In the past, the United States reassured both the Germans and their neighbors about Germany’s growing weight. Today, however, Washington is a source of unease. America is drifting away from its traditional role as a European power, one that was comprehensively engaged on the continent, supportive of its allies and committed to tackling common challenges. It is becoming simply a power in Europe, one that is selectively engaged, more spoiler than stakeholder, focused more on shedding burdens than sharing them.

These transformations have brought the German-American relationship to its lowest ebb in seven decades, just as sharper global competition demands more, not less, of Europe and America.

Thirty years after Germany’s peaceful unification, Germans and Americans alike can be proud of our common achievements. But we cannot be complacent. The window is closing on our ability to make our partnership as transformative for the future as it has been in the past. The human foundation of our relationship needs tending. We cannot afford to let a Europe that could be truly whole and free revert to a continent that is again fractured and anxious. And we each have a vested interest in turning our attention to global challenges that neither of us alone will master.

Unfortunately, it remains an open question whether Americans can muster the patience, and Germans the will, to reinvent their partnership for this unsettled new era. The elections each of our countries holds within the coming year will tell the tale.