Why Trump's Troop Withdrawal from Germany Is Only the Beginning 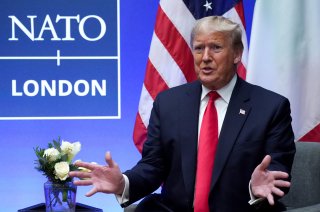 NATO is in trouble. Last week Secretary of Defense Mark Esper followed through on President Trump’s threats to withdraw forces from Germany. Esper announced twelve thousand troops would depart Germany, some remaining in Europe, mostly Belgium and Italy, and others returning to the US where they will then join rotational deployments in Eastern Europe and around the world. The announcement was condemned in Washington and caused a sense of foreboding on the other side of the Atlantic. The significance of the troop level cuts has less to do with its impact on US force posture in Europe than what it signals about the U.S. commitment to NATO, especially should Trump win a second term. If Donald Trump is reelected in November, last week’s arbitrary and uncoordinated withdrawal of U.S. forces from Germany portends a bleak future for history’s most successful alliance: Trump will pull the United States out of NATO.

The Adults Have Left the Building

Over the last four years, there has been a persistent narrative that, despite Trump’s reckless inclinations on foreign affairs, the actual policies that have been put in place have been relatively normal. Trump may tweet one thing but the adults in his administration ignore it or limit the damage.

At the beginning of the Trump administration, Europeans’ concern over Trump was mitigated by the presence of trusted senior officials in government, namely Secretary of Defense Mattis, National Security Advisor H. R. MacMaster and Secretary of State Rex Tillerson. Trump may express bizarre fealty to Putin but, look at the sanctions placed on Russia or the evictions of Russian personnel following the Skripal attacks (all of which occurred during Tillerson and MacMaster’s final month). Meanwhile, the Pentagon under Mattis, strengthened its force presence in Europe, turning the European Reassurance Initiative into the Deterrence Initiative.

But the adults have left the building. Mattis even wrote an ode to allies upon exiting, explaining how America's strength in the world is “inextricably linked to the strength of our unique and comprehensive system of alliances and partnerships.” Trump’s hostility towards America’s allies prompted Mattis to depart.

The Trump administration is now staffed with officials, many unconfirmed by the Senate, that are there not because of their qualifications but because they are loyal to Trump and willing to do what he says. His tweets are now acted upon.

His announcement made clear this was about appeasing the President’s desire to slight Germany and not US national security. In attempting to lay out a logic or a strategy for withdrawals, he simply revealed there was none. Instead, he offered a sloppy and ill-conceived strategy to justify the president’s dangerous rhetoric. One could soundly make the case for adjusting force posture amid shifting geopolitical dynamics in Europe, for example repositioning forces in Poland or Southeast Europe. It could also make sense to move headquarters to Belgium to better integrate with NATO. But such a decision would require coordination and consultation with the military services, America’s allies in the region, and members of Congress. It would require addressing logistical concerns and answering questions about deterrence against Russian aggression. But none of this was done.

Esper was in a rush to please his boss. But why does Trump care so much about troop numbers in Germany?

The Bear in the Room

Trump and Esper’s actions only make sense in the context of the broader approach to Europe and Russia throughout the Trump administration. Trump’s affinity and praise for Russian President Vladimir Putin and his desire to mend ties and work with Russia is consistent and clear. Whatever the reason for this, and speculation is rife, it is simply a trend that cannot be ignored. Similarly, there has also been a clear and consistent pattern of hostility from Trump toward NATO and America’s closest democratic allies in Europe. From the beginning of his presidency, Trump has called into question whether the United States would actually honor its NATO security commitments and has repeatedly discussed withdrawing the United States from NATO.

Trump has treated NATO as if it were a protection racket and he was the mob boss coming to collect. He has little idea of how the Alliance works, and said, according to John Bolton, “I don’t give a shit about NATO.” Trump questioned whether the United States would defend a treaty ally, claiming in an interview that Montenegro has “very aggressive people,” asking himself why the U.S. should defend it. During his first visit to NATO headquarters in May 2017, Trump had yet to reaffirm his commitment to Article 5. White House staff told the New York Times prior to that speech he would do so, and it was in his prepared remarks. But when he addressed the summit, there was no mention of Article 5. It would only come weeks later, slipped into a press conference in Washington.

In former Trump National Security Advisor John Bolton’s new book, he even claims that he talked Trump out of announcing he would pull the United States out of NATO at the 2018 summit. Bolton recently remarked at the Aspen Security Conference that the way to talk Trump down was to highlight the reelection ramifications. Bolton fears a second term Trump would be able to act more on his tweets. As he recently told Carol Lee at the Aspen Security Forum:

“If the political guardrail of reelection is removed, and the most powerful argument any of us ever used in the foreign affairs area to get Trump to do something in the first term, that is to say the risk of volcanic negative reaction by Republicans in Congress is removed, I think the prospect is that he will do more of what he talks about rather than do more of what he did under complaint and criticism. That could well mean, whether with respect to Russia or NATO or any other issue in foreign policy, that what he actually says he would then do because there would not be the fear of losing political credit."

The best hope for NATO in a Trump second term is that the Alliance, and the prospect of an American withdrawal, simply does not cross the radar of the easily distracted president. But this is where Trump’s desire to improve relations with Russia spells trouble for the Alliance.

Undermining the NATO alliance is Russia’s top strategic objective and has been since the Alliance was formed after World War II. Russia has long called for the withdrawal of U.S. forces from Europe and Kremlin spokesperson Dmitry Peskov could barely hide his pleasure as he told CNN: "We never hid that [we think] the less American soldiers there are on the European continent the calmer it is in Europe." Russia seeks a new grand bargain with the United States to recreate set defined spheres of influence and to see NATO, which it sees as a Cold War relic designed to threaten Russia, drastically downsized or dismantled.

And now Russia has an American president who demonstrates clear hostility to the Alliance and is intent on transforming bilateral relations and appears to listen to what Putin has to say. When Putin and Trump met in Helsinki, Trump was constrained by a coming midterm election, the Mueller investigation, and the oddly timed announcement of indictments against Russians for interfering in the election. Nevertheless, the warmth in that meeting and Trump’s willingness to follow Putin’s lead was evident. The adults still in the room were quick to assure that former Ambassador Michael McFaul would not be made available to Russian authorities and that the United States wouldn’t engage in some bizarre cybersecurity cooperation.

What’s clear however is that in that meeting and others, Trump and Putin got along extremely well. What is less clear is what they’ve been talking about in their many conversations. Trump has hidden the content of at least five meetings with Putin from U.S. officials. It was recently revealed that Trump and Putin have talked seven times since the coronavirus pandemic began but we know little about what they are discussing. However, we do know that when it was revealed that Russia put bounties on U.S. forces in Afghanistan Trump still didn’t broach it with Putin. Instead, he downplayed it and parroted Kremlin talking points.

All this adds up to a very bleak picture for NATO should Trump remain in office. The former Commander of the U.S. Army in Europe Ben Hodges described last week’s withdrawal of forces from Germany as “a gift to Putin.” He was right. But the ultimate prize is not in the withdrawal but what Russia stands to get should Trump win a second term. The withdrawal of U.S. forces from Germany was a taste of what’s to come with a second Trump term: the end of NATO.