The Ghost of Ukraine’s Future 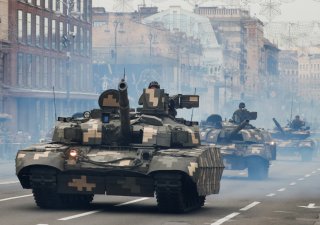 What happens if Washington attempts to force Russia into concessions over Ukraine through a Reaganesque display of strength, when in fact the United States has a comparatively weak hand to play? That is the unenviable situation that President Joe Biden finds himself in after his video meeting with Russian president Vladimir Putin this week and his tough talk about not recognizing any Russian redlines.

The notion that the United States is at a disadvantage in contending with Russia strikes most Americans as far-fetched. After all, America’s gross national product is many times larger than that of Russia, and we dominate the international financial system. Our military is larger and much more capable, our offensive cyber capabilities are unparalleled, and we enjoy the support of a large array of treaty allies and military partners in Europe and around the world. By contrast, Russia has few friends and allies, a middling economy largely dependent on energy exports, and a declining population hit hard by Covid-19. On paper, the United States appears to hold many cards in this high-stakes game.

But in practice, the ability to bring force to bear in specific circumstances matters far more than aggregate measures of national power. When it comes to Ukraine, Russia is better able to move large numbers of combat-ready forces into battle, more familiar with the local terrain, and far more prepared to go to war than is the United States, for which Ukraine is not a matter of existential importance. Russia’s military has a recent track record of success in Syria, not to mention in Ukraine itself. And Moscow has very likely planned for the possibility of draconian U.S. and European sanctions and other punitive measures that Washington might impose in response. If push comes to shove in Ukraine, Russia is very likely to win—and quickly.

Should Moscow opt to invade, a Russian campaign would probably be aimed at effectively turning territory in southeastern Ukraine into an extension of Russia itself. As many as 200,000 Russian ground forces could be arrayed in an arc from north to south along a 600-mile front. Publicly available satellite photos show that the largest concentration of Russian military forces currently lies between Voronezh and Crimea. Forces north and northwest of Kiev may constitute a supporting attack with the goal of preventing Ukrainian forces in and around Kiev from moving south to reinforce Ukrainian defenses from Voronezh to Luhansk and Donetsk. Since the battle would take place on Russia’s geographical doorstep, leaders on both sides would be intimately familiar with the terrain they must fight over.

The Russian maneuver units consist of approximately 100 battalion tactical groups (BTGs): reinforced armored and armored infantry battalions of roughly 750 to 1,000 soldiers including artillery, engineers, and support elements. The vast majority of this force is positioned in southern Russia, capable of striking west across the border with Ukraine along multiple axes with operational objectives south of Kiev along the Dnieper River. Roughly twelve BTGs are positioned to move west along the Black Sea coast toward Odessa, the seizing of which would transform Ukraine into a landlocked state.

The ground maneuver force would operate within the framework of tightly organized intelligence, reconnaissance, and surveillance (ISR) elements linked to powerful strike formations. There might be as many as 100 batteries of rocket artillery in the assembled force. These include systems like the BM-30 Smerch, a system often referred to as a high-end conventional weapon of mass destruction (WMD). A single salvo of five BM-30 Smerch’s firing 300mm rockets can destroy an area the size of New York City’s Central Park with the explosive power equal to a one-kiloton nuclear warhead. In addition, the Iskander mobile missile system, M a precision-guided tactical ballistic missile, would attack Ukrainian airfields, operational headquarters, and logistical infrastructure with explosive 1,058-pound conventional warheads carrying HE fragmentation, submunition, penetration, and fuel-air explosive at ranges between 180 and 300 miles.

Meanwhile, at every level—tactical, operational, and strategic—integrated air defenses composed of S-400 and S-500 Russian air and missile defense systems would protect Russian strike and maneuver formations from Ukrainian air and missile attack. Any Ukrainian or NATO manned or unmanned, low-flying, subsonic platform, whether it were a conventional rotorcraft, a tilt-rotor, or a fixed-wing prop/turboprop aircraft, would be highly susceptible to detection, engagement, and destruction.

If Russian forces attack, the skies over Ukrainian forces would be crowded with a mix of Russian surveillance drones, manned aircraft, and, potentially, Russia’s new loitering munitions. These are effectively cruise missiles designed to hover over the battlefield for hours and engage beyond line-of-sight ground targets. These attacks would be rapidly followed by precision-guided rocket artillery fire.

Under these circumstances, it is not unreasonable to assume that Russian ground forces would reach their operational objectives along the Dnieper River in as little as seventy-two to ninety-six hours. Whether Moscow would decide to press further west and seize the port of Odessa is hard to know, but the action would place Russian forces in close proximity to the pro-Russian Moldovan separatist republic of Transnistria on Romania’s border, rendering Odessa a tempting target.

Kiev’s ability to contend with such a campaign is highly questionable. It is vastly outmanned and outgunned by the Russian military. Its goal would be to retain as much territory east of the Dnieper River as possible while delaying the Russian advance, in the hope that Russian momentum would slow and buy time for immense international pressure on Moscow to halt its offensive.

The Biden administration is reportedly not considering direct military intervention in the event of an invasion of Ukraine. And with good reason—it could do little on the battlefield to counter such moves. The United States has only three combat brigades in Europe, and two of these are lightly armed with antiquated equipment. Although we could realistically employ advanced combat aircraft in Ukraine, they would have to contend with advanced Russian air defenses and formidable Russian electronic jamming capabilities. U.S. air superiority, which has been central to our military operations against lesser powers since the end of the Cold War, would not be assured in Ukraine.

Knowing this, Washington is threatening to impose harsh consequences on Russia outside the battlefield, using “sanctions from hell” and other unspecified measures, in the hope that this will stay Putin’s hand. Unfortunately, it is very likely that the Russians have long anticipated what the United States may do. Along with China, they have prepared for the possibility of being kicked out of the international SWIFT system. They have alternatives to the newly built Nord Stream 2 natural gas pipeline, should Europeans decline to allow its use, and they may even be prepared to choke off their supplies of gas to Europe in mid-winter in retaliation. To deter possible U.S. action against their satellite systems, they have signaled their willingness to take out U.S. satellites by conducting a successful anti-satellite missile test just two weeks ago despite vehement U.S. protests, and they have built land-based backup systems should their own communications and navigation satellites cease operations.

The good news is that Putin almost certainly understands that an invasion of Ukraine would lead to a complete break in relations with the West, rendering Russia in effect a dependent junior partner of China. Moreover, he probably realizes that Russian forces would very likely have to deal with guerrilla resistance in occupied Ukrainian territory, and that unoccupied portions of western Ukraine could become a host for U.S. and NATO forces over the longer term. It is doubtful that these are outcomes he finds appealing. He would probably prefer to find an alternative way to derail a U.S. alliance with Ukraine if Biden is prepared to bargain. But if Washington refuses to recognize that Russian redline, he may well be prepared to fight—and there is not much the United States could do to stop him.

Douglas Macgregor, Col. (ret.) is a decorated combat veteran, the former advisor to the Secretary of Defense in the Trump administration, and the author of five books.

George Beebe is Vice President and Director of Studies at the Center for the National Interest. He is a former director of Russia Analysis at the CIA, a former staff adviser to Vice President Cheney, and author of The Russia Trap: How America’s Shadow War with Russia Could Spiral into Catastrophe.