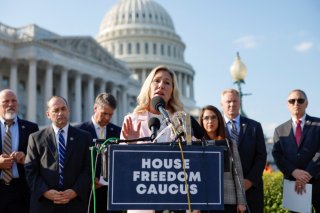 A deadly border incident between Poland and Ukraine has reignited unsettled debates, amplified by the GOP’s new House majority, over the scope of continued U.S. support for Kyiv.

Reports emerged on Tuesday that a missile crossed into NATO member Poland, killing two people outside the far-eastern border village of Przewodow. Ukrainian president Volodymyr Zelenskyy quickly blamed Russia for the deadly attack. “Russian missiles hit Poland, the territory of our friendly country. People died,” he said in his nightly address. “How many times has Ukraine said that the terrorist state will not be limited to our country. … Hitting NATO territory with missiles. … This is a Russian missile attack on collective security! This is a really significant escalation. Action is needed.”

But Western leaders did not join Zelenskyy in immediately identifying Russia as the culprit. President Joe Biden suggested on Tuesday it was “unlikely” that the missile was fired by Russian forces. Polish president Andrzej Duda and NATO secretary-general Jens Stoltenberg announced the next day that, though an investigation into the incident is still ongoing, the blast was “likely” caused by an errant Ukrainian air defense missile. The ultimate blame lies with Moscow, Stoltenberg added. “The whole incident is caused by Russia’s brutal war in Ukraine,” he said.

Yet Zelenskyy publicly refuted the consensus of top Polish, NATO, and U.S. officials, insisting that the missile was launched by Russia. “I have no doubt that it was not our missile or our missile strike,” he said on Wednesday, according to Ukrainian outlet Ukrainska Pravda, without immediately providing proof. “I am confident that we should and will [take part in the investigation] ... I want us to be fair, and if it was the use of our air defence, then I want that evidence.”

Conservative commentators, politicians, and activists who have long expressed skepticism over the Biden administration’s Ukraine strategy pounced on the deadly border incident. Kyiv’s obstinate messaging surrounding the missile launch drew frustration and outrage not just from the usual crop of conservative dissenters but also from the White House and other NATO partners. National Security Adviser Jake Sullivan called Zelenskyy’s office “and urged officials to tread more carefully with how they were speaking about the incident,” according to a CNN report. “This is getting ridiculous. The Ukrainians are destroying [our] confidence in them. Nobody is blaming Ukraine and they are openly lying. This is more destructive than the missile,” a NATO country diplomat told Christopher Miller, a Ukraine correspondent for the Financial Times.

The Polish missile crisis was perhaps the first wartime scandal involving Kyiv to make a major splash in U.S. political discourse, rising to the level of a key messaging issue for a wide array of conservative populist figures loosely described as the “New Right.”

“The missile attack killing two innocent people in Poland was likely from Ukrainian Air Defense. We must stop letting Zelensky demand money & weapons from US taxpayers while he is trying to drag us into WW3,” tweeted Rep. Marjorie Taylor Greene (R-GA), according to the Washington Post. “No more money to Ukraine. It’s time to end this war and demand peace.”

Greene unveiled a privileged resolution on Thursday to audit funds allocated to Ukraine. A relevant committee has fourteen days to reject or approve the resolution, Greene said. If no decision is made, she can force a house floor vote on the bill. Though the measure has slim chances of succeeding in the current Democratic-controlled congress, Greene hopes to use it for demonstrative effect. “If they choose to vote this down, that’s going to tell the American people, no, you are not allowed to know what is happening with your money,” she said.  Greene noted she is prepared to reintroduce her resolution in the next Congress, according to The Hill.

Greene was joined in a press conference announcing the resolution by a group of like-minded representatives, including Thomas Massie (R-KY), Matt Gaetz (R-FL), Cory Mills (R-FL), Andrew Clyde (R-GA), and Barry Moore (R-AL). “American support … for what we’re doing in Ukraine is withering,” Massie said, accusing Democrats of tying a prior vote on Ukraine aid with disaster relief to Florida and planning to do so again. “She [Nancy Pelosi] is gonna include [Ukraine funding] with a response to virus and responses to more tropical storms and hurricanes … If you don’t vote for this, she will go out and have a press conference like she did last time and say, ‘well Republicans didn’t vote to help these people,’” Massie said.

GOP supporters of Biden’s Ukraine policy in the House and Senate, which remains Democrat-controlled, have previously insisted that the party’s Ukraine skeptics are a fringe minority. Yet some of the sentiments espoused by Greene are shared to a less pronounced degree by scores of her GOP colleagues. Rep. Kevin McCarthy (R-CA), who handily won a party vote earlier this week to become speaker, said in October there will be no “blank check” for Ukraine if Republicans retake the House. McCarthy’s stance, unpopular as it may be in Washington, reflects a growing attitude among the GOP base: nearly half of Republicans believe the U.S. is doing too much to help Ukraine, according to a recent Wall Street Journal poll. Even many of those who support continued Ukraine funding, such as Rep. Victoria Spartz (R-IN), have called for tighter oversight to ensure efficient and proper allocation of the historically unprecedented volumes of aid going to Kyiv. The concerns being expressed by some Republicans are not just logistical but principled in nature. “What is your definition of victory?” Massie told Tucker Carlson on Fox News in response to repeated assurances from Biden administration officials that Washington will back Kyiv for “as long as it takes” as the Russo-Ukrainian War grinds into its ninth month. “Are you going to retake Crimea?”

Though long-term trends among Republican voters indicate a steady decline in public support for Ukraine funding, influential voices within the GOP have so far held firm. Rep. Michael McCaul (R-TX) and Rep. Mike Rogers (R-AL), who are poised to chair the Foreign Affairs and Armed Services committees respectively, have shown no signs of softening their position even as they find themselves increasingly at odds with their base. “I think it is ‘America First’ to help NATO and our allies. It’s also ‘America First’ to help Ukraine so that we don’t end up in there. What we’re trying to do in Ukraine is avoid global conflict,” McCaul told Reuters.

It remains to be seen to what extent Republican dissenters in the House will succeed in mounting a credible challenge to the Biden administration’s Ukraine strategy. GOP sources say the new House is likely to agree on additional oversight measures, but efforts to reverse, hinder, or otherwise force a shift in Biden’s overall approach to the Ukraine conflict will face an uphill battle.