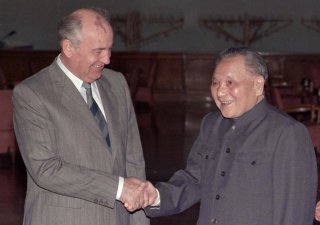 Mikhail Gorbachev’s death last month unleashed numerous commentaries and evaluations of his legacy. Predictably, many of these focused on Beijing’s perception of the last Soviet leader and what his political life meant for the future of the People’s Republic of China (PRC). However, this discussion overlooks a key part of Gorbachev’s legacy within China that shapes Sino-Russian relations to this day: the normalization of relations between Moscow and Beijing that took place on his watch.

Normalization represented a major breakthrough in Sino-Soviet relations and culminated in Gorbachev’s visit to Beijing in May 1989, during which he met with Deng Xiaoping and the Chinese Communist Party (CCP) leadership. While overshadowed by the Tiananmen protests and short on immediate deliverables, the visit was a major success that represented the result of years of effort and negotiations by both sides. Gorbachev played a key role in ushering in this difficult normalization, as evidenced by the history of the period.

By the mid-1980s, when Gorbachev came to power in Moscow, Sino-Soviet relations had thawed slightly but were still far from normalized. Leonid Brezhnev had tentatively proposed an improvement in relations during his 1982 Tashkent speech, a proposal that was met with some interest by Chinese leaders, particularly among party elders nostalgic for the Sino-Soviet alliance of the 1950s. The larger picture seemed to favor rapprochement. Moscow’s increasingly difficult position in the context of Washington’s escalation of the Cold War under the Reagan administration, its failing economy, its costly quagmire in Afghanistan, and its need to focus on desperately needed domestic reforms favored improving relations with Beijing. So did China’s growing frustration with the United States, particularly with Washington’s policy on Taiwan, and its need for a stable international environment facilitating Deng Xiaoping’s Reform and Opening program. Nevertheless, this background did not necessarily mean full normalization. Beijing still feared Soviet encirclement and saw Moscow more as a threat than as a partner. Thus, China insisted that Moscow remove “three obstacles” to improving relations: the presence of Soviet troops on China’s northern border; Soviet support for Vietnam, particularly in Cambodia; and the Soviet occupation of Afghanistan.

Gorbachev played a key role in removing these three obstacles, something that his predecessors had refused, and actively pursued a rapprochement with the PRC. To this end, Gorbachev sought to resolve a fourth issue by making concessions about the alignment of the disputed Sino-Soviet border and agreeing to the resumption of negotiations on the issue. Substantial progress in resolving the Sino-Soviet territorial dispute soon followed, producing an agreement in 1991. Gorbachev also made great efforts to cultivate Beijing by promoting better economic relations (which were mostly unsuccessfully), avoiding any criticism of the Chinese government, such as by refusing to comment on the growing demonstrations in Tiananmen Square at the time of his visit, and adopting a firm stance on the Taiwan issue. Particularly amidst the Tiananmen crisis, this approach solidified the improvement in relations and built mutual trust, despite many Chinese leaders’ personal disregard for Gorbachev whose ideas and policies they partly blamed for the student protests.

Against this background, Gorbachev’s legacy of normalizing relations with China has three long-term implications which continue to shape relations between Moscow and Beijing. First, Gorbachev not only put an end to more than three decades of conflict between China and the Soviet Union but also initiated a process of establishing closer ties with Beijing. A complete break with previous Soviet confrontational policies allowed the two sides to actively pursue better relations. The normalization of Sino-Soviet ties marked the beginning of a different political partnership between Moscow and Beijing. The new dynamics of this relationship were best captured in the warm but businesslike handshake between Gorbachev and Deng Xiaoping which differed from the embraces and kisses that communist leaders often used to greet one another.

Second, Gorbachev’s normalization of relations inaugurated a process of resolving the border dispute. The issue, which dated back to the nineteenth century, was a major source of tension that had poisoned Sino-Soviet relations for decades, even leading to a brief armed conflict in 1969. The resolution of the dispute was spearheaded by an agreement in 1991 during the waning days of Gorbachev’s rule. Additional agreements signed in 2004 and 2008 fully settled the dispute and demarcated the border between Russia and China. The gradual removal of this more than century-old obstacle to bilateral relations played a major role in promoting closer relations between Moscow and Beijing.

Third, Gorbachev’s normalization with China inaugurated a tradition of each side using the other to hedge against the West. This allowed each party to limit its growing reliance on the West and gain some leverage over the United States without fully committing to a close partnership. After the Tiananmen crisis in 1989, China put a much greater emphasis on this approach. In various forms, this strategy dominated Moscow and Beijing’s triangular diplomacy with Washington until the outbreak of the U.S.-China Cold War and Russia’s invasion of Ukraine.

Of course, none of this suggests that Gorbachev single-handedly inaugurated the normalization of relations between Moscow and Beijing or deserves to take full blame for its long-term consequences. It takes two to tango and China, led by Deng and Soviet-friendly conservative party elders such as Chen Yun, actively pursued normalization. Moreover, while the contemporary foundations of Sino-Russian relations were laid in the late 1980s, their evolution over the last three decades has not been constrained by previous events and developments and bears the imprint of subsequent leaders and their responses to the changing international environment. Put simply, Gorbachev’s policies to China clearly influenced Sino-Russian relations in the coming decades but did not automatically guarantee Moscow’s growing alignment with China in recent years.

Gorbachev left an important and often underappreciated geostrategic legacy for Sino-Russian relations. He not only helped remove major obstacles to normalization but put relations between Moscow and Beijing on a new trajectory of gradual improvement. The result was a geopolitically significant rapprochement between Moscow and Beijing that has grown and evolved for more than three decades. It is surprising how successful this rapprochement has been given that China and Russia are two large and deeply insecure neighboring powers with a history of tension, deep mutual mistrust, and an overlapping strategic periphery. Such a stable and long-term rapprochement unquestionably represents an achievement for the foreign policies of Beijing and Moscow. However, it comes with substantial costs, especially for Russia. The effect of this rapprochement on both sides, and international politics more broadly, remains an open question.

Regardless of the future direction of Sino-Russian relations, the normalization of relations during the late 1980s was a key development. For better or worse, Mikhail Gorbachev, a man of many legacies, should also be remembered as the Russian leader who inaugurated this process.

Ivan Lidarev is a foreign policy analyst and expert on Asian security, as well as a former advisor at Bulgaria's National Assembly. Currently, he is serving as Think Visegrad visiting fellow at the Institute of International Relations Prague (IIR).