Why Gorbachev’s Dream for Russia Failed 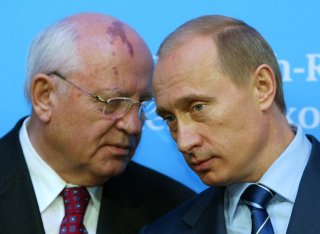 Revered by the West but reviled in Russia, Mikhail Gorbachev’s clashing legacies have cast a long shadow over the Russian Federation’s place in the liberal international order.

A 1998 Pizza Hut commercial in Moscow depicted two diners arguing over Gorbachev’s legacy. “Because of him, we have economic confusion,” said one patron. “Because of him, we have opportunity!” responded another. The two men went back and forth until a third diner intervened: “Because of him we have many things… like Pizza Hut,” she said. “Hail to Gorbachev!” proclaimed a crowd of happy diners, each with a pizza slice in hand. The shot quickly panned to Gorbachev sitting next to his ten-year-old granddaughter Anastasia, basking in the praise of Russian Pizza Hut Patrons.

“We weren’t sure he was going to show up,” Tom Darbyshire, who wrote the commercial, later told The Washington Post. “He was about an hour late, negotiations had been a little tense, and I think he was only doing it because he needed the money.” Yet the 1998 Pizza Hut ad, even if driven by the pecuniary concerns of its protagonist, reflected the spirit of the age—the hopeful sense that, for the first time since the end of World War II, Russia and the West could work together to build a future based on shared values of global prosperity and stability.

Yet the 1990’s optimism displayed by Western and some Russian leaders belies a different, altogether darker consensus.

Gorbachev’s Pizza Hut commercial, welcomed by Western observers as a bellwether of Russia’s integration into the globalized world, is today scorned by many in Russia as a despicable act of moral and political prostration before the United States. “When this commercial first appeared, it struck me as a citizen. The President of my country, albeit a former one, is starring in a Pizza ad. That is how little he respected his life experience and his country. Though it’s obvious that Gorbachev did not respect his country, otherwise he never would have allowed his presidency to end like that,” prominent Russian TV host and political commentator Vladimir Solovyov told media publication Vzglyad in 2019. “A person should have at least a modicum of self-respect. To fall from being the President of the USSR to someone advertising Pizza. What a career Mikhail Sergeevich [Gorbachev] carved out for himself.”

Years of polling and sociological research in the aftermath of the Soviet collapse suggest the majority of Russians share Solovyov’s view to some degree. As many as 75 percent of Russians believe that the Soviet era was the best time in their country’s history, according to a 2020 Levada poll. A poll conducted in that same year found that at least two-thirds of Russians expressed “regret” over the Soviet collapse, a sentiment prominently espoused by Russian president Vladimir Putin.

Gorbachev’s death on Tuesday put on a renewed spotlight on the sharp differences of historical perception between Russians and the West. From his government’s policies in the fated days of the fall of the Berlin Wall to his handling of contentious secession talks with Soviet republics yearning for independence, what Western lawmakers and scholars have canonized as Gorbachev’s greatest triumphs is remembered by many of his countrymen as a series of catastrophic blunders resulting in the USSR’s loss of great-power status and, with it, the destruction of the Russian state’s very purpose. Gorbachev, said prominent Russian politician Leonid Slutsky, is “the most remarkable politician of his time,” but his reforms “played into the hands of those who were trying to wipe the USSR off the world’s map.” The perception gap over Gorbachev’s legacy is vividly illustrated by the decade following the Soviet collapse. What is sometimes hailed as the 1990s “golden age” of Russian liberal democracy, when ties between the West and Russia reached their historical peak, is remembered in Russia as a decade of destitution and social decay at home and humiliation abroad.

Gorbachev, eulogized in the West as a visionary and “great emancipator,” is generally regarded by Russian public opinion as a fatally misguided idealist at best and a “traitor” at worst. “He is a traitor, not a General Secretary. He destroyed the state, a precedent for betrayal from above. It is synonymous with betrayal,” said Nikolai Kolomeitsev, the first deputy head of the Russian Communist Party, following Gorbachev’s death. “I am convinced that the time will come when the truth about Gorbachev will prevail in Russia and the world, and we will all be horrified [by it],” stated Russian politician Sergei Baburin. “He was a terrible person who not only betrayed not only his country but his civilization.”

The Kremlin has not joined hawkish Russian commentators and politicians in openly condemning Gorbachev, instead striking a more ambivalent tone. “Gorbachev gave an impulse for ending the Cold War and he sincerely wanted to believe that it would be over and an eternal romance would start between the renewed Soviet Union and the collective West,” said Kremlin spokesman Dmitry Peskov. “This romanticism failed to materialize. The bloodthirsty nature of our opponents has come to light, and it’s good that we realized that in time.”

It was reported earlier this week that Putin is planning to refuse Gorbachev a formal state funeral in what Russian and Western media outlets speculated would be a final, stinging rebuke of his legacy. The Russian president opted for a less confrontational course, approving a semi-state funeral ceremony in the Pillar Hall of the House of the Unions near the Kremlin on Saturday. Putin, who will not attend the ceremony, privately laid flowers at Gorbachev’s coffin on Tuesday.

Yet Putin has repudiated Gorbachev’s legacy in a much more profound way: not in word, but in deed. “What Mikhail Sergeevich Gorbachev did is all destroyed. Gorbachev’s reforms—to zero, to ashes, to smoke,” Russian opposition journalist Alexei Venediktov told Russian Forbes magazine in 2020. “I can tell you that Gorbachev is upset, of course, he understands. This was his life’s work. Freedom—this was Gorbachev’s work.”

Gorbachev’s ambitious foreign and domestic reforms were premised on the conviction that there is a place for Russia in the grand project of a “common European home.” But the intoxicating chiliasm of the 1990s soon gave way to a more familiar set of mutual suspicions, historical grievances, and conflicts of interest. It became increasingly clear to lawmakers on both sides of the Atlantic that Russia could not be integrated into the liberal international order as a post-Soviet nation-state. By the same token, the Kremlin concluded that the liberal international order as it is currently constituted poses an existential threat to Russia’s statehood. The Gorbachovian vision of a unified Europe stretching “from Lisbon to Vladivostok” has been dashed against the rocks; in its place is the Kremlin’s concept of a “Russian World” that stands in diametrical opposition to the “Collective West.”

The Ukraine War, described by NATO chief Jens Stoltenberg as the most dangerous moment for Europe since World War II, marks the most visceral rejection yet of the post-Cold War world envisioned by Gorbachev. It is a forceful reaffirmation of the very same imperial identity that Gorbachev believed Russia, if encouraged by a prudent and forward-looking West to act on its better instincts, could outgrow. Gorbachev’s contemporaries triumphantly theorized that his tectonic reforms heralded the “end of history,” or the undisputed hegemony of Western liberal democracy. Instead, the Soviet collapse opened a new chapter in the global great-power struggle for supremacy that may well turn out to be bloodier and more destructive than the last.