Hong Kong Was a Test Run for ‘Wolf Warrior’ Diplomacy 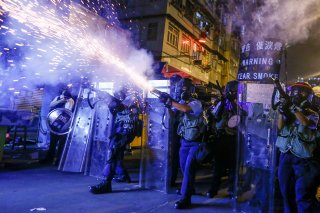 There has been much talk about China’s “wolf warrior” diplomacy, named for a series of patriotic Chinese films. The reasons for this terminology are debated and not embraced by all Chinese diplomats, but since the outbreak of the coronavirus pandemic and plummeting of U.S.-China relations, the world is noticing a newly confrontational approach to foreign affairs; a very undiplomatic form of diplomacy.

That they have only noticed this spring suggests they haven’t been following events of the past year in Hong Kong closely enough.

In June 2019, Hongkongers rose up to deliver a stinging rebuke to their chief executive, Beijing loyalist Carrie Lam Cheng Yuet-ngor, when she attempted to amend the territory’s laws and allow for the extradition of criminal suspects to mainland China. It wasn’t just the tens of thousands of people who showed up on June 12 to fight police and block entry into the Legislative Council building, preventing a vote from taking place and forcing the suspension of the bill. No, this was far broader than that, with up to two million people—nearly one-third of the city’s population—participating in some rallies in opposition to the amendment.

Mass unrest is not new in Hong Kong—there are examples well before the territory’s handover from British to Chinese rule, and some have taken place since. What was unusual in this case was how broad it was. The objections to the bill did not just come from young people, radicals, and pro-democracy stalwarts in the opposition parties. They also came from the business sector—not exactly natural enemies of the city’s conservative pro-Beijing bloc—who worried about what the amendment would mean for the city’s reputation as an international hub of commerce.

(The depth of this opposition would ultimately be reflected in last November’s district council elections when opposition candidates—some explicitly linked to the protests—crushed the establishment.)

By June 15, 2019, the Hong Kong government got the message, accepted defeat and suspended the bill, a stinging defeat for Beijing and the chief executive they’d hand-picked just two years earlier. In the face of such sweeping opposition, Chinese state media responded by . . . blaming U.S. interference.

As the crisis worsened throughout the remainder of the year, this would be a recurring complaint from Chinese sources. Apparently unable to accept the implications of a defeat so broad, and what it would mean for their plans to gradually integrate Hong Kong economically, socially, and culturally into the rest of China, state media, Beijing-aligned officials, and Hong Kong-based commentators who supported the Chinese view continued to cast blame on vague “interference” from outsiders. “Hong Kong affairs are the internal affairs of China, and the Chinese government will not let foreign forces intervene in it, and will not let foreign forces create chaos in Hong Kong,” Hua Chunying, the Chinese foreign ministry’s spokesperson, has been quoted as saying. She later described U.S. Secretary of State Mike Pompeo as pleased with the protests because they were “the creation of the U.S.”

Whether these interferers were providing weapons, funding, strategy, or mere moral support was left unclear, and probably by design.

When the suspension of the bill failed to satisfy the protesters, who demanded its withdrawal, an inquiry into police conduct and progress toward universal suffrage in Hong Kong, China tried other tactics. The city’s People’s Liberation Army garrison was filmed conducting anti-rioting drills, barking instructions in Cantonese (the dialect used by Hongkongers) and “putting down” mock rioters carrying out activities similar to Hong Kong’s real demonstrators. Around the same time, the State Council’s Hong Kong and Macau Affairs Office began putting out a series of ominous-sounding statements about how the Communist Party viewed the protests as similar to a “color revolution” and that Beijing would not “sit idly by” if the crisis worsened.

But Beijing did not limit itself to accusations of foreign influence, or even threats of a repeat of Tiananmen Square. At times it threw out the inevitability argument, in which it insisted that Hong Kong’s destiny lay with mainland China and that any attempt to deny this destiny would fail. Chinese leaders and associated commentators are fond of this tactic when its moral arguments do not resonate; at the beginning of 2019 Xi Jinping all but told Taiwan’s leaders in the Democratic Progressive Party, still smarting from a legislative defeat a little more than a month earlier, that they would need to accept a variation on the one country, two systems formula in place in Hong Kong.

Such “advice” surely sounded better at the time. But one country, two systems’ fall from favor in Hong Kong and Taiwan’s reelection of the independent-minded President Tsai Ing-wen has done little to dull such confidence. Xi himself declared last October that anyone who attempted to separate any part of China would face “bodies smashed and bones ground to powder.” While he did not name any region of China they might wish to separate from Beijing’s control, his statement came at time when Hong Kong’s protest violence was reaching a crescendo and his language—lambasting “external forces that support the splitting of China”—echoed Chinese allegations of foreign puppet masters fueling talk of independence in the territory.

The coronavirus pandemic has also done little to shake Chinese confidence. While the virus’s origins in Wuhan and the Communist Party’s initial efforts at covering it up have drawn flak, state media is now touting the country’s “well-coordinated prevention, control and treatment” as the reason for their lower official infection/mortality rate than the United States, and claiming that this is a model for the world to follow. When serious questions are leveled about the Chinese government’s conduct in response to the pandemic, it can always depict its critics as “racist” and imply that the virus’s transmission in China was perpetrated by outsiders, namely the United States.

As the pandemic has spread and Washington has sparred with Beijing over responsibility for it, this has led to concerns that the United States is sleepwalking into conflict with China. But whatever one thinks of Washington, and the administration leading it, it could not have stumbled into such a standoff alone. Beijing has played a role in stoking conflict thanks to its rejection of compromise, its refusal to accept fault, and sense of national destiny. Such are the hallmarks of the wolf warrior.

Those surprised by Beijing’s response to the coronavirus pandemic should not be; the past year in Hong Kong was a test run for it.

Rob York is the program director for regional affairs at Pacific Forum.