Senate Democrats: Trump is an Enemy of Both Hong Kong and George Floyd Protests 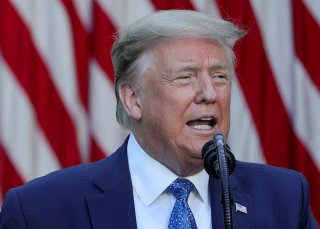 Sen. Sherrod Brown (D–Ohio) said that President Donald Trump “leads China's leaders to believe that they can tighten their grip on their own people” as Democrats slammed the President’s stance towards protests in both Hong Kong and the United States.

China has been increasingly cracking down on pro-autonomy protests in the city of Hong Kong, which was promised the ability to keep its unique freedoms under the One Country, Two Systems policy.

U.S. cities have also been roiled with unrest over the past week, after the death of George Floyd provoked public outrage at the police’s treatment of African-Americans.

Senate Democrats portrayed Trump as an enemy of both protest movements during a Senate Banking, Housing, and Urban Affairs Committee hearing on U.S. support for the Hong Kong protests.

“I hope my colleagues will also stand with the millions of our black and brown fellow Americans who essentially want the same thing,” Brown said. “I think everyone on this committee wants the U.S. to be a global leader, a beacon of democracy to oppressed people everywhere who long for freedom. The President of the United States is making that harder.”

Brown claimed that Chinese leaders believe that Trump will “look the other way” at human rights violations while negotiating for a trade deal.

Democrats were especially angered by the chaos in front of the White House on Monday, as police and the National Guard cleared protesters from nearby Lafayette Park.

Military leaders have distanced themselves from the incident—during which Trump walked across the park flanked by cabinet members and top military commander Gen. Mark Milley—while defending the actions of the police.

“It is a reality that we witnessed something right here in Washington, DC that I never thought I would witness in my lifetime,” Sen. Chris Van Hollen (D–Md.) said. “That was the President of the United States, along with the Attorney-General, Secretary of Defense, and others, deploying military police to break up a peaceful assembly outside the White House.”

“We all know that is not our system of government in the United States. That is the exception,” he continued. “The President has totally undermined that.”

Van Hollen also brought up Trump’s reaction to the Tiananmen Square massacre in 1989. This week marks the 31st anniversary of the incident.

“When students poured into Tiananmen Square, the Chinese government almost blew it,” Trump had told Playboy Magazine at the time. “Then they were vicious, they were horrible, but they put it down with strength.”

Brown said that now is a “good opportunity to re-commit to human rights everywhere, in Tiananmen Square and Lafayette Square.”

“China makes it clear that it sees itself more as an adversary of the West than a partner of the West,” he said. “Well, of workers in the West. We know China has no problem with Western CEOs.”

The star witness of the hearing was labor activist Lee Cheuk-yan, leader of the Hong Kong Confederation of Trade Unions and a former member of Hong Kong’s parliament.

“The [Chinese Communist Party] defines subversion of other national security crimes according to their own political needs, and not the law,” he said. “The law is only an instrument of suppression for them.”

Lee was speaking while released on bail from a Hong Kong jail. He had been arrested at a Tiananmen Square memorial, banned in Hong Kong this year for the first time in history.

The union leader said that commemorating Tiananmen Square had been a “symbol that we have freedom under One Country, Two Systems.”

But, he promised, “we Hong Kongers will fight on!”