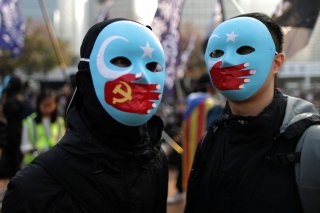 Congress has passed the Uyghur Human Rights Act, potentially imposing economic sanctions on members of China’s Politburo for the country’s campaign against its Uyghur Muslim minority.

The Trump administration had reportedly balked at imposing human rights sanctions on China while U.S.-Chinese trade negotiations were ongoing last year. But the new sanctions legislation comes as the White House looks to take a “competitive approach“ towards China.

Chinese authorities are accused of carrying out a campaign against Uyghurs and other Turkic Muslims in Xinjiang involving mass detention, torture, and forced labor. The legislation calls on the Trump administration to identify and sanction Chinese officials responsible for the campaign.

And it names Xinjiang’s Communist Party secretary Chen Quanguo, a member of China’s ruling Politburo, as someone who “bear[s] direct responsibility for human rights violations.”

Targeting him would be the first time the U.S. government has imposed sanctions on a Politburo member. Chen had previously served as Communist Party secretary for Tibet, another restive region where China has carried out a heavy-handed crackdown.

The bill passed the House of Representatives on Wednesday. It had passed the Senate by unanimous consent earlier this year.

Rep. Thomas Massie (R-Ky.) was the only “no” vote on Wednesday. He had criticized an earlier version of the bill last year, writing that “it invites [other] governments to meddle in our affairs.”

The bill passed a day after Speaker of the House Nancy Pelosi (D-Calif.) appointed Uyghur refugee Nury Turkel to the U.S. Commission on International Religious Freedom, a body that reports on human rights abuses to Congress.

“The world has stood by for too long as the Chinese government detained millions of Muslims in concentration camps,” Turkel said in a statement on Wednesday. “The Uyghur Human Rights Policy Act would be the first major legislation focused on promoting the rights of Uyghur and other Muslims. Hopefully, other countries will follow the U.S. government’s lead and take action on this issue.”

It is now up to President Donald Trump to sign the bill into law. Trump has signaled that he is now interested in pressuring China over Xinjiang.

China’s Ministry of Public Security condemned the blacklisting, stating that “there is no issue relevant to human rights, ethnicity, and religion but is relevant to anti-terrorism and anti-secessionism…Xinjiang affairs are purely China’s internal affairs, with zero tolerance of foreign interference.”

The Trump administration has pressed China over other issues that the Chinese government considers internal affairs.

Secretary of State Mike Pompeo invoked the Hong Kong Policy Act in response to a Chinese crackdown on Wednesday, beginning a process that could end the autonomous Chinese city’s special trade status under U.S. law.

Pompeo has also pushed for international organizations to open relations with Taiwan, a self-governing island that China considers a renegade province. The U.S. Senate has unanimously backed such a move.

China has threatened U.S. lawmakers with sanctions of its own for what it considers “anti-China legislation.”

“We must resolutely hit back at those politicians who, for no reason, undermine China-U.S. ties for their own political benefits,” said Chinese Academy of Social Sciences research fellow Yuan Zheng in the Communist Party’s Global Times. “For those who promote anti-China legislation, we need to find out what the business ties are between those officials or their families with China.”