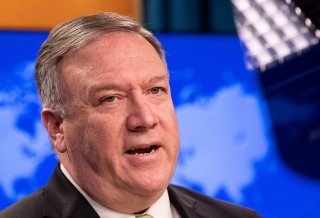 Secretary of State Mike Pompeo met with survivors of the Tiananmen Square massacre on the 31st anniversary of the incident.

The 1989 killing of several hundred protesters outside the seat of government in Beijing has long been a sensitive issue for the Chinese government. Pompeo met with four of its survivors as China’s own foreign ministry attacked the United States for recent unrest.

He posted a photo of himself on Wednesday with former Tiananmen Square protesters Wang Dan, Su Xiaokang, Liane Lee, and Henry Li.

Pompeo had met with them the day before, according to U.S. State Department spokeswoman Morgan Ortagus.

“We mourn the victims of June 4, 1989, and we stand with the people of China who continue to aspire to a government that protects human rights, fundamental freedoms, and basic human dignity,” she said on Wednesday.

“Thirty-one years later, the total number of missing or dead Tiananmen protesters is still unknown,” Ortagus added. “We reiterate our call for a full, public accounting of those killed or missing.”

Hu Xijin, editor-in-chief of the ruling Communist Party’s Global Times, claimed in an English-language video message on Wednesday that “U.S. officials should instead meeting [sic] with American protesters across the country and hear their voices.”

Cities across the United States have seen peaceful protests and violent clashes in response to the death of George Floyd, an unarmed African-American man who died at the hands of Minneapolis police when an officer put his boot on Floyd’s neck.

China has used the unrest to criticize American police as too heavy-handed.

“Black lives matter and their human rights should be guaranteed,” Chinese foreign ministry spokesman Zhao Lijian said at a Monday press conference. “Racial discrimination against minorities is a chronic sickness in American society. The current situation shows the severity of racial discrimination and police violence in the U.S.”

But Chinese leaders also used the unrest to drum up support for their own heavy-handed behaviors at home.

“In 1989, public order in China had been disrupted much more severely than the U.S. is experiencing today,” Hu said in his Wednesday video message. “China’s restoration of order was indisputably justified. Just imagine, if the U.S. sees further disruption and its Constitution challenged, what would the administration do next?”

He had previously said that American protesters were committing “exactly the same violence” as pro-autonomy activists in Hong Kong.

The Chinese foreign ministry also lashed out at the self-ruling island of Taiwan—which Beijing considers a renegade province of China—for calling on Chinese leaders to apologize for the 1989 massacre and accept reforms.

“The relevant remarks of the Taiwan authorities are totally nonsense. As to the political disturbance in the late 1980s China has drawn a clear conclusion,” Zhao Lijian told reporters. “The great achievements after the founding of new China fully demonstrate that the development path chosen by the new China is totally correct and in line with China’s national conditions.”