How to Avoid the Second American Civil War 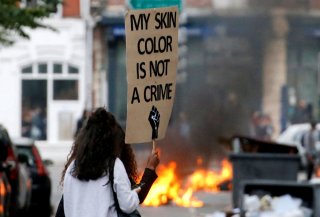 In politics, as in sports, defeat can be snatched out of the jaws of victory. On the surface, the Black Lives Matter protests in the wake of the murder of George Floyd appear to many to have accomplished demonstrable things: galvanized a productive and long-overdue national conversation, achieved prominent legislative “successes,” eliminated racist shibboleths and meaningfully moved public opinion on issues from systemic racism to qualified immunity. This sea change in discourse is nothing short of remarkable. Yet, there are structural reasons to be fearful that the opening salvo in the Second American Civil War has already been fired. President Donald Trump’s recent executive order is unlikely to assuage tensions between protestors and police. Quite the opposite. Both its framing and various historical precedents tell us to expect a hardening of the debate into two polarized camps with reason, compromise, and centrism all left by the wayside. Discussing and planning for a further escalation of violence is not alarmist or defeatist—it is, in fact, the only sensible way to avert it.

Contemporary civil wars in geostrategically located polities have all been the inadvertent outcome of mass protest movements that misfired after successfully achieving most or all of the movement’s initial aims. Recent events in Ukraine and the Arab World present dangerous omens. Even after achieving their stated goals, post-modern protest movements have occasionally engendered the collapse of their polities—or the loss of previous freedoms as in Hong Kong. Due to their scale and ripple effects throughout society, the future of our republic may hinge upon the various structural factors at play in these #BLM protests. Right now, the fundamentals look very precarious, indeed. The protests also leave the American electoral process ripe for foreign interference.

At their essence, mass protests are symbolic demonstrations of power—a group or coalition of groups unified by a shared goal choose to gather visibly to demonstrate their potential physical or electoral force. Protests achieve their goals most sustainably when at least three out of four conditions are met: 1. Coherent leadership; 2. Concrete and immediately implementable demands; 3. Having opponents in power who can ‘read’ what the protestors want and are potentially open to compromise; 4. Support from the wider community which will grow stronger with time, the longer and more visibly disruptive the protests become.

Leaderless protests occasionally can sustain a “success” if all three of the other conditions are met—as with the Arab Spring in Tunisia. However, that is the exception which proves the rule. Generally, because leaderless protests emerge from a coalition of diverse interest groups, they fail to articulate their demands effectively. If protests are both leaderless and lack a clear achievable goal, such as the Occupy Wall Street movement or today’s protests, then they are at an enormous disadvantage—one which no amount of sheer numbers or the righteousness of their cause can compensate for. Furthermore, when facing off against opponents who do not acknowledge the protestors’ symbolic power, a protest can easily spiral out of control leading to an unintended civil war or the potential destruction of a polity—as in Ukraine.

Today’s worldwide protests presently lack any of the four conditions for protest movements to achieve sustainable change. We must remember that in the 2014 EuroMaidan protests in Ukraine, all four conditions were met and the protests still occasioned a bloody civil war, foreign intervention, and the irrevocable destruction of Ukraine’s territorial integrity.

The protests of the last two weeks have unleashed an unbelievably powerful genie capable of granting nearly any wish the protestors might ask for—but for their wish to be granted permanently rather than ephemerally, the right structural factors must undergird their request to the genie. The most relevant case study to examine the role of structural factors is another example of a cross-class, multigenerational protest movement sparked by a single instance of systemic injustice which was filmed on a smartphone, which then spawned local protests, that in turn, sparked myriad copycat protests in neighboring states. That was the 2011 Arab Spring protests—whose outcomes can be divided into two rough typologies: those which faced regimes willing to listen and compromise (Egypt and Tunisia) and those which did not (Syria and Libya). In all four cases, the protestors were leaderless but had a coherent extremely legible demand “ash-Sha’ab yurido isqaat al-Nazaam” (the people demand the fall of the regime). The protestors held it on placards; they screamed and chanted it.

In the Tunisian case, the regime of Authoritarian strongman President Zayn al-Abideen Ben Ali grasped the symbolic power of the peaceful protestors. Initially, he offered them a small compromise. The protest grew. Much of the army, trade unions, and civil society had come to side with the protestors; they signaled that if Ben Ali stayed in place their support for the movement would grow further. Ben Ali heard the protestors’ message and simply left the country. In Egypt, the situation was roughly similar, although the regime attempted a violent crackdown, which backfired, causing President Husni Mubarak, who rose to power through the ranks of the military, to be abandoned by his own Army.

In Libya and Syria, the leaders were unwilling to bend. They insisted that they remained popular and refused to acknowledge the protestors’ demands as legitimate. Muammar el-Qaddafi and Bashar al-Assad shot into peaceful crowds causing the protests to become militarized and take the form of violent uprisings that solicited outside military support. As his forces were hemorrhaging territory in late February 2011, Qaddafi proclaimed two mutually contradictory realities: 1) that there were “no demonstrations at all” and that ‘They love me all my people . . . they will die to protect me’; and also 2) that Qaddafi would personally oversee the hunting down of the protestors “street by street, house by house,” and massacre them.

One does not need to have devoted his life to studying Libya, to know that this story has not ended well. In Libya, the initial protestors in Benghazi were largely civil rights lawyers with well-articulated and justified grievances.  Yet, they were unable to control the outcome that they indirectly occasioned.  In Syria, the situation has been more tragic still. Peaceful protestors demanding gradual reforms were shot by the regime leading to violent uprisings organized on a largely sectarian basis which led to nearly a decade of civil and proxy war in which more than half of Syria’s population has either been killed or displaced. The well-intentioned leaderless protestors inadvertently provide an excuse for a wanna-be autocrat to destroy their country beyond recognition.

Protests are inherently sloppy as David Meyer has pointed out, but what today’s protestors really want is order, not the reigning chaos where white officers repeatedly kill blacks with impunity and then have their police unions prevent fair trails. Yet, merely having a just cause isn’t sufficient when confronting specifically intractable opponents in the White House, governors’ mansions, the Senate, state legislatures, and mayoral offices. Most crucially, many Americans will grow tired of the protestors as they will come to be blamed for the second wave of the coronavirus.

Hence, as they are currently constructed, all four of the key variables—opponent, leadership, clarity of demands, and time—are not on the protestors’ side. The United States is not Syria, Ukraine, or Libya, but if the protestors do signal clear demands after which they will disperse and the top individuals in power either refuse to accept the meaning of the protestors’ symbolic show of power, then the protest is likely to miscarry, invite foreign interference, and lead to unintended and unpredictably consequences.

No one can say how it will all end. There could be false flag operations (like a modern-day Reichstag fire or Assad bombing civilians claiming he is attacking ISIS) or terrorist attacks from insurgents, the authorities, or outside actors. There has already been reactionary vigilantism, further police brutality, and widespread vandalism. This November, a second American civil war could erupt when one side loses the elections and the other takes to armed resistance or looting.

To decrease the likelihood of the collapse of our polity, if the protestors truly desire a sustainable resolution for their justified grievances, then they must anoint a hierarchical leadership to negotiate with those state, local, and congressional authorities they feel can be trusted to reach immediately implementable compromises in exchange for dispersal of the movement. Otherwise, the recent historical precedents do not bode well for the protestors, their aims, or our polity. If, God forbid, the worst happens, then the road to a second American civil war will have been paved with good intentions.

Jason Pack is a Non-Resident Fellow at the Middle East Institute, President of Libya-Analysis LLC. He is currently writing a book about how the enduring disorder in America's politics increasingly mirrors that of the Middle East.