How to Cooperate Over the Burma Coup 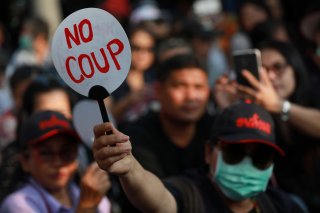 With an impending explosion of security, economic, health, and humanitarian crises, Burma is ineluctably on the path to becoming a failed state. The recent resurgence of the coronavirus aggravates the plight of the Burmese people who have already suffered much under the brutal crackdown of the new military junta. Since the military seized power from the National League for Democracy (NLD) in a coup d’état on February 1, 2021, it has killed nearly nine hundred people and detained more than five thousand to consolidate its hold on power via a brutal crackdown and wide-scale repressive measures.

Consequently, the military’s brutal suppression and indiscriminate killing unleashed a revolutionary energy among the people, especially the youth. Although opposition to the military coup began as non-violent resistance, many have come to the realization that only armed struggle can restore democracy in the country. The People’s Defense Forces (PDF), locally organized militia groups, have been mushrooming across the whole country with the aim of fighting back against the brutal junta and restoring democracy. While groups of mostly young people still continue flash protests across the whole country on a near-daily basis, more militant elements have taken to launching shadowy attacks on military targets.

The coup also triggered an economic collapse and financial breakdown. As a result, the World Bank forecasted that the Burmese economy will suffer an 18 percent contraction of GDP in 2021, and the United Nations Development Programme (UNDP) warned of a possible doubling of the poverty rate. Six months into junta rule, the third wave of the coronavirus hit a country in which the health system was already buckling amidst a boycott and suspensions of medical personnel opposed to the military coup.

The consequences of the coup are not just confined to those tragedies. In response to the military coup, Burma’s long-simmering civil war has been resurging. Some ethnic armed groups have carried out widespread attacks against the military, while others, especially in Shan State, have been engaging in armed struggle against each other for control over territory. Most ethnic armed groups, which historically have harbored suspicions about the NLD, have been reluctant to join the National Unity Government (NUG), which is mainly dominated by ousted NLD parliamentary members. Instead, they are trying to advance their own political agendas.

Since day one of the coup, most seasoned analysts have predicted that the country will likely become a failed state, which is increasingly the case. Within six months of the coup, the whole country is in turmoil with ubiquitous armed violence and renewed conflicts, a widening security vacuum, a crumbling economy, skyrocketing extreme poverty, and a devastating health and humanitarian disaster. In some ways, the reality is much worse than just a failed state scenario. With a surge of ferocious fighting and persistent efforts by ethnic armed groups to achieve political and geographic autonomy in the outlying areas, a country at the strategic heart of Asia is running the risk of disintegration and territorial fragmentation.

The Tatmadaw has not been able to consolidate its power, institutionalize its rule, or return the country to normalcy with only coercive power at its disposal. The key challenges to the junta are that the morale of its fighting force is dramatically declining, it is fighting on several fronts, and the state’s basic administrative mechanisms remain unimplemented as public cooperation is almost absent. Even strong supporters of the coup are reluctant to publicly collaborate with the military for fear of retaliation. However, the junta has shown no signs of turning back. The provisional administration council was reformed into a “caretaker government” and its initial one-year state of emergency was extended to two and a half years. This seems like the next step in the junta’s strategy to secure long-term power.

At the same time, the NUG’s “shadow government” is not yet strong enough to topple the junta. Despite its decision to organize armed resistance, the NUG has not been able to forge a united front with Burma’s ethnic armed groups to form the much-anticipated federal army. The PDF, announced and organized by the NUG, has not been fully activated due to a lack of arms and ammunition, while locally organized militias have been expanding throughout the country, operating independently, and radicalizing more with each passing day.

By that same token, the ethnic armed groups and ethnic political parties are trapped in a prisoner’s dilemma. They cannot cooperate with each other due to longstanding distrust despite being more or less aware that their mutual cooperation will possibly enable them to mount a serious challenge to the military. To be fair, they have good reason to distrust the NLD-dominated NUG. Under the guidance of the NLD vice chairman and campaign chairman for the Nov. 8, 2020, election, the NLD ran on an explicitly anti-ethnic party platform.

Against this background, it has become more obvious that the junta is unable to decisively defeat the rebels, while none of the opposition actors has enough strength to topple the junta on its own, and coordination between the myriad opponents to the regime is lacking. Burma is, therefore, trapped in a stalemate, and its history of decades-long insurgencies, civil wars, and political crises that no side can resolve continues. A widening security vacuum increases the potential for territorial fragmentation, economic catastrophe, skyrocketing poverty, and the breakdown of an already troubled health system with the resurgence of the coronavirus.

These problems will not be contained within Myanmar’s borders, and the spillover effects of the worsening situation in Burma will pose serious challenges for regional stability. However, the Association of Southeast Asian Nations (ASEAN) and Burma’s largest neighbors—China and India—have largely turned a blind eye to this tragedy. China has been playing a complex game in the crisis by supporting its proxy ethnic armed forces to take hold of their controlled areas, by providing limited assistance to the junta behind the scenes while not offering the blank check of support to the junta as in previous eras, and by keeping the West out of the game. India, the largest democracy in the world, has deliberately kept silent on the authoritarian takeover of its neighbor out of concern for its own interests.

Although ASEAN sought to take the lead in addressing the crisis in Burma with its “five-point consensus plan,” division and inaction have diminished ASEAN’s relevance in addressing the situation. The international community, clueless on how to tackle the crisis, unrealistically assigned all the responsibility to ASEAN. However, ASEAN has been struggling to even appoint a special envoy due to its internal struggles, let alone implement the five-point consensus. ASEAN does not have any leverage, and it has thus far been unable to go forward without the approval of the junta. Burma’s generals have eagerly exploited ASEAN to prolong their grip on power.

In order to practically and effectively put ASEAN’s consensus into action, it needs a push and support from the United States. The United Nations is very weak and ineffective, primarily due to the UN Security Council vetoes of China and Russia, and the other democratic countries rely upon the United States to take the lead on Burma. Moreover, the crisis poses an acute diplomatic challenge to the United States as the Biden administration has resolved to promote “ASEAN’s centrality” in its approach to Southeast Asia. It is U.S. policy to support ASEAN’s central role in the region’s international affairs, but the grouping lacks the political will to implement the five-point consensus, thus leaving the situation at an impasse. Finally, with a failed state becoming reality and with a growing risk of territorial fragmentation, Burma will continue to be a source of regional instability and a constant hindrance to long-term U.S. strategy in the Indo-Pacific region if it is not addressed.

Therefore, Washington should not wait to play a leading role in handling the Burma crisis until the situation in the country becomes uncontrollable. As a first step, the Biden administration should appoint a special envoy for Burma that reports directly to the secretary of state and the president. The special envoy’s first task would be to facilitate a broad-based dialogue between countries that oppose the coup and with the Burmese people, as well as support the development of a concrete, coordinated, and consistent policy with allies and partners to restore democracy in Burma.

Simultaneously, in order to strengthen the position of pro-democratic forces, the special envoy should work with the anti-coup movement in Burma to enhance coordination among opposition groups and establish a joint vision for a new federal democratic system in Burma that protects the rights and security of all people across the country. Considering China’s support for the junta and its existing proxy ethnic armed groups, this will require close engagement with Beijing especially, most importantly convincing them that the threat of continued instability in Burma threatens regional stability and China’s own interests.

Additionally, the role of the U.S. special envoy will be critical in ensuring effective international response. Most immediately, this means support during the upcoming UN’s credentialing decision. After the coup, Kyaw Moe Tun, the permanent representative of Burma to the United Nations, came out in support of the ousted elected government and anti-coup protesters, and the junta subsequently tried to replace him with its loyalist new ambassador. This dispute claims will be decided in the General Assembly’s Credentials Committee in mid-September, and this decision over who will be Myanmar’s ambassador to the UN will be crucial for the opposition’s international efforts going forward—for example, U Kyaw Moe Tun voted in favor of the UN General Assembly resolution in June. Recognizing the junta would no doubt embolden it to continue its brutal campaign against the people it claims to represent. Therefore, the special envoy and counterparts from like-minded countries should coordinate their recognition of the NUG as the legitimate government of Burma, and ensure that such representation is reflected in their diplomatic postings as well as in international institutions—especially the UN.