The Resolution of the Rohingya Crisis May Require Military Intervention 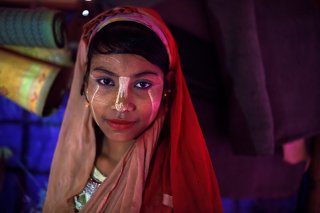 It has been five long years since a 2015 Yale Law School report found evidence that acts of genocide were being committed against the Muslim minority Rohingya of Burma. By December 2018, more than 1.1 million Rohingya had fled as refugees to Bangladesh, Saudi Arabia, and Malaysia. A Burmese military campaign of mass murder, rape, and the burning of villages that started in earnest in 2016 precipitated the exodus, which included four hundred thousand children.

Righting that wrong has proved difficult. U.S. and EU economic sanctions have pushed Burma closer to China. To date, the status quo is to leave the refugees crowded in camps that annually cost the international community almost $1 billion, and Bangladesh $3.6 billion. This lack of effective international action against the perpetrators invites additional violations by Burma and other countries watching the plight of the Rohingya.

The use of military force is seen as unrealistic, but perhaps unreasonably so. In the past, it has successfully reversed ethnic cleansing, including in 1999 when NATO launched an air campaign against Serbia to stop deracination of Kosovo’s Albanians. After three months, Serbia agreed to allow these 1.5 million back to their homes. Roughly four thousand NATO troops are still in Kosovo, protecting residents and culture on each side of the dispute.

Reasons for the Use of Force

To maintain a minimum of international order, state-level wrongdoers that flagrantly violate international norms must be punished. Allowing a country to get away with genocide invites other such actions and the international chaos that follows. From a realist perspective is a national interest on the part of the United States, India and Bangladesh to staunch the growing influence of China and Islamic extremists. The Rohingya, shut into thirty refugee camps along the Bangladesh-Burma border, are increasingly radicalized by Islamic preachers according to two sources in the region who have visited the camps. Political incorporation of the Rohingya into Bangladesh would weigh upon the Bangladesh ballot box and could tip that country away from supporting the moderate Awami League.

The Rohingya, if given voting rights in Bangladesh, would most likely support the Islamist Bangladesh Nationalist Party (BNP) and its junior partner, the Jamaat-e-Islami. The BNP is close to China, Saudi Arabia and Pakistan. The JIB has engaged in terrorism and is supported by Pakistan. The United States and India, to which Bangladesh under the Awami League currently leans geopolitically, could get permanently shut out if the BNP wins the next election in 2023 and opens the camps.

The United States, India and Bangladesh have an interest in protecting democracy in Asia, as every new country that aligns itself with China shifts the international order away from democracies and towards a world that makes China’s permanent rise increasingly likely. But these countries also have a humanitarian responsibility to protect those subject to ethnic cleansing and genocide.

While the international community has failed the Rohingya for years, it is not too late to right such an unspeakable international injustice. Few countries would welcome the Rohingyan refugees into their societies, and Bangladesh, just because it is the closest in proximity, should not bear the sole burden. Despite Burma’s protestations, the Rohingya are not from Bangladesh. They are indigenous to Burma’s Rakhine State. The only practical and humanitarian answer that strengthens international democracy and rule of law is to restore Rohingya land and homes in Rakhine State in a voluntary and dignified manner. These elements are essential, according to Samier Mansur, a social entrepreneur who works with refugees and has visited the Rohingya camps. He writes that “safety, citizenship, and sustainable housing” for the Rohingya will be necessary to induce their voluntary return to Burma.

Most critically, Rohingyas should not be forcefully returned to the three internally-displaced persons camps in Rakhine State, the most recent of which was built by Chinese firms according to one of the sources. These camps are more concentration camp than a return for the Rohingya to the village livelihoods they previously enjoyed, according to the other source. The Chinese-built camp, according to the first source who viewed satellite imagery, was built on the smoking ruins of a prior Rohingya village.

While Burma projects a willingness to accept the Rohingya back, it has bargained for a flow of just thirty-nine thousand per year and has not offered them full citizenship, according to Bangladesh Ambassador Sufiur Rahman, who was formerly detailed to Burma. At that rate, full repatriation of the 1.1 million refugees would require twenty years to complete.

Decades of repatriation should be unacceptable to the international community. Bangladesh has more reasonably demanded a full return of the refugees within two years, according to a 2018 paper written by Rahman and published by the Diplomatic Correspondents Association of Bangladesh. Without a demonstrated willingness to allow the rebuilding of homes and full citizenship of Rohingya returnees, few refugees will budge from their camps in Cox’s Bazar, Bangladesh.

If Burma’s government continues to resist the voluntary repatriation of the Rohingyas, as it has done up until now, then repatriation should be swiftly executed under the protection of an international peacekeeping force. Such a force would also provide protection to the Buddhist and Hindu inhabitants of the state. While military force should always be the last resort, all other solutions have been tried and found lacking. Unfortunately, military force must now be considered a viable alternative given Burma’s intransigence and flagrant violation of the norms against genocide. The Kosovo success exemplifies what could be repeated in Rakhine.

International diplomatic, economic, and—if necessary—military pressure should be gradually increased until Burma allows the Rohingya back to their villages, where they should be supported in the rebuilding process. Only this will prevent their further radicalization,

decades or more of instability and terrorism in Bangladesh and beyond, and the further erosion of the international norms that are necessary for global order.