How India Can Help Ease the Afghan Refugee Crisis 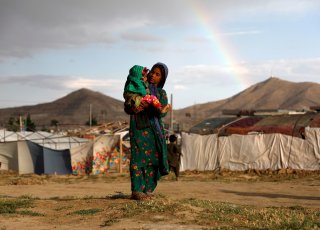 The Taliban takeover and the completion of the U.S. military withdrawal from Afghanistan have plunged the country’s future into great uncertainty. However, one thing is clear: a refugee crisis is inevitable. While the Taliban has declared an end to its war, thousands of Afghan citizens have fled and thousands more are trying to flee Afghanistan because they don’t want to live under a Taliban government. A worsening economic crisis—compounded by Western sanctions on the new Taliban regime that will exacerbate economic strain for the masses—could trigger fresh flows of refugees. Additionally, the Taliban’s struggles to address the economic crisis, coupled with the enduring threat of terrorism, will hamper the group’s ability to consolidate its power. This could lead to protests and armed unrest that generates new surges in violence, which would lead to yet more refugee flows.

Already, refugee camps are being built on the Tajikistan border, while Turkey is building a wall to keep Afghans out. Pakistan and Iran, which have historically hosted more Afghan refugees than any other country, have vowed to seal their borders, but people have still been entering in recent weeks—including, at one point, approximately eighteen thousand per day at the Spin Boldak border crossing with Pakistan.

We hear much less about how India fits into this Afghan refugee story. And yet, as the largest and most powerful player in South Asia, not to mention one of the biggest Asian donors to Afghanistan over the last two decades, India has a major role to play in helping ease Afghanistan’s refugee crisis.

India is currently home to more than fifteen thousand Afghan refugees, most of them scattered across New Delhi’s central neighborhoods. As of 2019, Afghans were the second-largest refugee population fleeing to India after the Rohingyas, making up 37 percent of the total refugee population, according to the United Nations High Commissioner for Refugees (UNHCR). They have mainly fled to India because of regional proximity and friendly historical ties between the two countries. The influx of Afghans into India began after the Soviet invasion of 1979, with a majority from the persecuted Hazara Shia community, and a minority being Hindus or Sikhs.

While the first wave of refugees in the 1980s settled in Delhi’s central neighborhood of Lajpat Nagar. The second wave of refugees, which arrived after 2002, now lives in Malviya Nagar, another neighborhood in Delhi with many refugee assistance centers and large Yemeni and Somali refugee populations. Many refugees in India own Afghan restaurants, travel agencies, and grocery stores while they remain separated from their families back home. Refugees must go to the UNHCR office in New Delhi to register as asylum-seekers and apply for refugee status and a refugee card (known as a “blue card”), without which they cannot have access to basic facilities such as education, healthcare, affordable housing, and formal employment. This process takes a minimum of three years, during which Afghans cannot send their children to school, rent an apartment or access healthcare. During the waiting period, the UNHCR formally ensures cash assistance and educational bridge programs run by non-governmental organizations, but the success of these programs on the ground is limited.

Afghan refugees in New Delhi, though welcomed by and integrated into Indian society, often face immense hardships as undocumented people without the formal protection of the Indian state. They cannot access social protection packages, are charged almost double the rent of an Indian citizen for housing, and lack proper healthcare and education services. This is due to three primary reasons: India’s failure to sign the 1951 Refugee Convention and its 1967 protocol, the recent implementation of a new citizenship law, and the ongoing coronavirus pandemic.

India is one of the few remaining “liberal democracies” that have not signed or ratified the 1951 Refugee Convention and its 1967 protocol. The convention is signed by nearly three-quarters of the world’s countries, and it outlines the core responsibilities that host countries have towards vulnerable populations facing persecution and displacement. While India has historically accepted and hosted refugees fleeing war or domestic conflict from Bangladesh, Sri Lanka, and Tibet, it has no formal framework for handling refugees. It treats various refugee groups on an ad hoc basis, oftentimes forcibly repatriating asylum-seekers to countries where they may face immense danger (such as the forced repatriation of Chin-Burmese refugees to Myanmar from Mizoram state).

While the Indian state works with the UNHCR on the integration of some recognized refugee populations such as Sri Lankans in Tamil Nadu and Tibetans in Arunachal Pradesh, there have been personal accounts of forced repatriations and discrimination of other Muslim refugee populations, namely Afghans and Rohingyas. Defense Minister Rajnath Singh even tweeted in 2017 on the Rohingya crisis: “By deporting them, we are not violating any international law as we are not a signatory to the 1951 Refugee Convention.”

India has not provided a formal reason for not signing the convention. However, the decision has been attributed to the fact that South Asia’s borders are porous, with a long history of migration across countries, and the lack of regulation and security on the borders may lead to “unwanted” migrants entering the country. In other words, the prioritization of internal security to address a perceived Islamist threat, especially in the northern areas of India bordering Pakistan and India-administered Kashmir, is used as India’s justification for not hosting refugees and asylum seekers—and for not signing the global accord that would require New Delhi to do so. India is also uncomfortable about the sizeable demographic changes that could occur if it is obligated to host refugees by signing the convention—notably if there is an influx of Muslim migrants from its northern and eastern neighbors. Another cited reason for not signing the convention is India’s resource crunch and its inability to provide sufficient economic and infrastructural resources to integrate refugees. However, India is a signatory to the 1984 Convention against Torture, which prohibits the return of any person to a country where there is a significant risk of torture. Thus, it has a moral and legal responsibility to construct a formal policy framework for the nearly two hundred thousand refugees and asylum-seekers residing in India without “the right to have rights.”

According to the Modi-led BJP government, the 2019 Citizenship (Amendment) Act (CAA) is one such step that India is taking to reformulate its refugee policy. The CAA seeks to provide refuge to persecuted Hindus, Sikhs, Christians, Buddhists, and Parsis from Pakistan, Afghanistan, and Bangladesh who have been living illegally in India. The amendment changes the definition of an “illegal immigrant,” and provides fast-tracked citizenship in six years (instead of the standard twelve years) to those who fall under the aforementioned categories. In other words, the CAA considers refugees of every religious group except Muslims as deserving of formal protection.

The official reasoning is that the CAA is meant to provide refuge to persecuted minorities, and since Pakistan, Afghanistan, and Bangladesh are Muslim-majority countries, Muslim refugees do not fall under the category of persecution. However, this line of reasoning is clearly inaccurate, as there are many Muslim minorities such as Rohingyas, Hazaras, and Ahmadis that are violently persecuted in their home countries. The Quint interviewed Shia Hazara Muslims living as refugees in New Delhi in 2020, and many told stories of persecution in their Sunni-majority home country of Afghanistan, both by the state and by the Taliban. Despite this, most refugee applications are rejected by the UNHCR, while women and children are frequently repatriated against their will. While some refugees suggest that this is due to years of backlog, others claim their applications were rejected because the UNHCR did not believe they were sufficiently in need of state protection against the Taliban.

The CAA will only exacerbate the long-standing inequalities between India’s treatment of Muslim and non-Muslim refugees, with continued forced repatriations of Rohingyas and Afghans. India’s refugee policy has historically reflected diplomatic and political rather than humanitarian interests. In 1959, India welcomed the mass influx of Tibetan refugees that followed the Dalai Lama, due to its strategic rivalry with China. They are now considered “the most successful refugee community” and have been integrated into Indian society. On the other hand, in 1979, India refused to acknowledge Afghan refugees as “refugees,” calling them “transients” instead, due to its close diplomatic ties with the Soviet Union. The current wave of Hindu nationalism and state-sponsored rhetoric that labels Muslim migrants as “infiltrators” does not inspire hope that New Delhi will go out of its way to provide support to Afghan Muslim refugees seeking to enter India.

The Indian government recently stated that Afghan refugees will be able to apply for an emergency visa that will allow them to receive fast-tracked visas to India for six months. However, government officials, including Minister of External Affairs Dr. S. Jaishankar, have taken to social media tweeted that Afghan Sikhs and Hindus will remain India’s priority when it comes to bringing in Afghan refugees. Such comments have stirred up controversy about India’s selective criteria with refugees, and only exacerbate concerns surrounding the CAA.