How Putin Cornered Himself in Ukraine 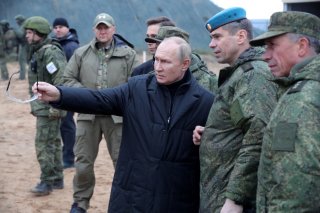 Russian president Vladimir Putin is in a pickle. Nearly eight months after he launched a major conventional invasion to topple the Zelenskyy government and establish political control in Ukraine, it is his own government that is showing signs of strain. This has been exacerbated by his recent decisions to manage the political problems created in Russia by Ukraine’s successful counteroffensive in the east and the south. That counteroffensive began in early August, after Ukraine stopped Moscow’s campaign to seize all of the Donbas, and made great advances, taking back more territory by mid-September than Moscow had seized since April.

Ukraine’s success prompted calls from municipal officials across Russia for Putin to resign and sharp criticism of the war effort from uber-nationalists who insisted on escalation until victory. They also prompted criticism of Putin’s Ukraine policy from an unlikely quarter, his BRIC buddies Xi Jinping and Narendra Modi at the Shanghai Cooperation Organization summit in Samarkand. Putin responded with three risky measures: a “partial” mobilization to replenish his troops in Ukraine; dubious referenda in four Ukrainian oblasts only partly under Russian control that predictably yielded a vote in favor of joining Russia followed by their “annexation”; and ever less subtle statements from senior Russian officials that these territories, if Ukrainian attacks continued, could be defended by all means available to the Kremlin, including nuclear weapons.
Putin launched his invasion of Ukraine as a “special military operation,” not a war, precisely because he wanted to avoid conscripting Russians to fight. In his bones, he knew that despite Levada Center polls showing large majority support for his war on Ukraine, the Russian people had little interest in fighting it. In other words, they understood as blather the Kremlin’s insistence that Ukraine’s future was an existential issue for Russia. Putin hoped to finesse this by calling it a “partial” mobilization.

But the finesse failed as the mobilization frightened hundreds of thousands of draft-age men to flee the country; provoked demonstrations in fifty cities and violent protests in Dagestan, from which Moscow had already taken a disproportionate number of Ukraine-bound soldiers; led to attacks on draft boards in twenty cities and on recruiting officers; and was followed by many reports on social media of ill-equipped new conscripts reduced to buying their own supplies. It has become so troublesome for the Kremlin that senior figures such as Duma Speaker Vyacheslav Volodin, Federation Council President Valentina Matviyenko, and RT chief Margarita Simonyan criticized the implementation of the mobilization. This is a tried-and-true tactic in Russian governance—“if only the Czar knew”—to protect the leader when a policy goes bust.
Putin had hoped that rattling his nuclear saber would persuade the West and especially the United States to pressure Zelenskyy into stopping the counteroffensive in the territories now claimed by Moscow. Earlier in this year, such threats had appeared to work as senior Biden administration officials had said on several occasions that they would not take sensible steps to help Ukraine—like facilitating the delivery of MIG fighter jets or sending longer-range artillery—in order to avoid provoking Moscow. But this time it did not work. Biden issued a strong public and private warning to Moscow that the use of nuclear weapons—even tactical low-yield nukes—would have devastating consequences for Russia.

More importantly, the counteroffensive continues. Putin took steps in Moscow on September 30 to formally “annex” those territories, only to be embarrassed the next day when Ukraine seized the key logistical town of Lyman in the Donetsk Oblast. Since then, Ukrainian forces have continued to advance in the east and are close to seizing the entire right bank of the Dnipro River near the crucial city of Kherson. Equally bad for Putin, both strategically in Ukraine and politically at home, Ukraine on October 8 partly blew up the bridge across the Straits of Kerch, which provides essential supplies for Russian forces in both Crimea and Kherson.

Once again, Putin responded harshly in order to mollify Russian hawks: a massive bombing campaign designed to kill civilians and take out Ukraine’s infrastructure and especially its electricity grid. While the campaign reportedly knocked out 30 percent of Ukraine’s electricity supply temporarily, it also prompted NATO to decide to send Ukraine more sophisticated anti-aircraft systems that it had previously denied Kyiv. This will further enhance Ukraine’s military capacity and complicate Russia’s ability to reverse its sagging military fortunes.

Not surprisingly, all this has further unsettled things in Moscow. Key regime figures are starting to position themselves for advantage under Putin. And a blame game has now started at senior levels to explain Moscow’s failures in Ukraine. The principal targets are Defense Minister Sergei Shoigu, Chief of the General Staff Valery Gerasimov, and Colonel General Alexsandr Lapin, commander of Russia’s Central Military District. The principal of the Wagner mercenaries, Putin pal Yevgeny Prigozhin, has used his Telegram channels to go after Shoigu and the two generals. But Shoigu also has the means to fight back, which may explain why Alexei Slobodenyuk, who works for Prighozin on media matters, was recently arrested. Meanwhile, Chechen strongman Ramzan Kadyrov has allied with Prighozin in attacking Shoigu and the generals.

Putin has shrewdly not been publicly involved in this, but he just gave a boost to Kadyrov by promoting him to colonel general. What this means for Russian policy remains to be seen, but Kadyrov’s recent activity on the war underscores the dilemma facing Putin. Kadyrov did the easy thing, making global headlines by advocating the use of tactical nukes in Ukraine. But recognizing the political toxicity of mobilization, his public statements conveniently point out that Chechnya, to date, has been overrepresented on the Ukraine front. For Kadyrov too, the Ukraine war is not existential; and he will not risk his position in Chechnya publicly calling on more Chechens to fight there, even if behind the scenes his minions are trying to provide some conscripts. And now there are reports that senior officials are directly confronting Putin with concerns about his failing Ukraine policy.

None of this necessarily means Putin is going down soon. We simply do not know enough about power dynamics in Russia. But serious fissures are appearing in the edifice of the Putin regime, and this is clearly the most uncertain period in the Putin era. Russian history teaches that losing wars is not good for monarchs or authoritarians, and often leads to liberalizing change, at least for a while—as happened in 1905, 1917, and 1989. Putin is hoping to avoid defeat in Ukraine and this fate by issuing increasingly shrill warnings that he might use nuclear weapons unless Ukraine ceases its current counteroffensive in the recently “annexed” areas of Ukraine not fully controlled by the Kremlin. As long as the West stands strong against this dubious threat and continues to give Ukraine the weapons it needs to push back Moscow’s aggression, the Russian leadership will have no alternative but to give up its imperial plans for Ukraine and other neighbors.

John E. Herbst is a former U.S. ambassador to Ukraine and Uzbekistan, and Senior Director of the Atlantic Council’s Eurasia Center.