How Will Democrats Fare in a Biden-less 2024 Presidential Primary? 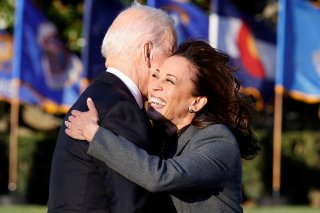 A plurality of Democrats don’t think President Joe Biden should be the party’s nominee in 2024, but Vice President Kamala Harris is even less popular. Either would envy Donald Trump-level approval numbers now.

Democrats now face a conundrum for 2024. Biden has said he intends to seek a second term, but an octogenarian is a tough sell even with the advantage of incumbency.

It is, of course, very early.  But having looked at the Republican side if Donald Trump runs vs. a Trumpless GOP primary, it’s worth looking at a Bidenless Democratic primary.

As with the potential Republican field, I’m looking at the recent Pew Research “political typology” assessment for the Left that falls into four categories to determine what lane contenders will run in.

The first lane is the “Progressive Left,” which supports far-reaching changes to address racial injustice and expand social programs. The “Establishment Liberals” are generally the same ideology but don’t see the need for sweeping change. “Democratic Mainstays” are the largest and oldest Democratic-voting group, but have a moderate tilt. Then there is the “Outsider Left,” the youngest group, very liberal, but frustrated with the political system and skeptical of the Democratic leaders.

Despite a 28 percent approval rating, Harris would still have to be the frontrunner for the nomination as not only the sitting vice president but as a historic woman of color to serve in the role.

It seems she might have some appeal to every group except the more skeptical “Outsider Left,” since Harris is the opposite of genuineness, which is what this group is seeking.

For a party obsessed with identity politics, Harris checks several intersectionality boxes. However, that was true going into the 2020 Democratic primary. She opened strong and quickly fizzled, dropping out before the Iowa Caucus. That will give Democrats some pause about nominating her.

Then again, Biden was a gaffe-prone presidential candidate that finished at or near last place in his previous presidential runs. So being vice president is instant gravitas.

There’s buzz about a rivalry with Harris and Transportation Secretary Pete Buttigieg, who won the 2020 Iowa Caucus and placed second in New Hampshire. The former mayor of South Bend, Indiana, proved to be a prolific fundraiser and would appeal mostly to Establishment Liberals and Democratic Mainstays. While he could run in those lanes, he might make inroads to the Progressive Left as a history-making potential first gay president. But, he might well be way too establishment for the Outsider Left.

Ballotpedia raises the prospect of seventeen potential Democratic candidates, but here we’ll winnow down to reasonable possibilities and maybe a couple of long shots.

Rep. Alexandria Ocasio-Cortez (D-NY) will be old enough to run for president in 2024—and has generally followed the Trumpian view that there is no such thing as bad publicity.

The most recognizable member of the Squad would definitely appeal to both the Progressive Left and the Outsider Left, and could be the heir to the Bernie Sanders vote. Though, she would be a message candidate—as Democrat voters would realize she would be a disastrous nominee.

A woman candidate that would appeal to all four factions is former Georgia gubernatorial candidate Stacey Abrams. She’s a gifted orator and is a hero to the party in pushing changes that led to Biden flipping her state. One problem is that she takes losing about as well as Trump—still claiming her 2018 loss to Gov. Brian Kemp was illegitimate.

She came close in 2018, a good Democrat year. She might opt out of running in 2022, likely to be a good Republican year. Losing another governor’s race would stifle her brand in the party. It might be better to run for president on the celebrity status she has now. Then again, it might be tough to make a case for the presidency if state legislator is the highest office ever achieved.

As I noted in the previous piece on Republicans—as a rule, governors win and senators lose.

A governor with some recent national attention is Kentucky gov. Andy Beshear. The Hill columnist Joe Concha recently wrote, “Beshear won his gubernatorial race in deeply red Kentucky because of moderate policies, particularly on police and crime.” He added, “Unlike Biden, Beshear is a unifier who worked with state Democratic and Republican leaders to pass legislation to appropriate funds to build better schools, expand broadband and invest in hard infrastructure improvements, including clean drinking water.”

This one seems to come out of nowhere. Yet, before 2016, it was Democrats who were the party full of surprises nominating the likes of Jimmy Carter, Bill Clinton, and Barack Obama over more establishment frontrunners in the pack.

Beshear would mostly appeal to the Democratic Mainstays but could broaden to the Establishment Liberal wing. After this year’s drubbing in Virginia, a candidate such as Beshear could rescue the Democrats from the AOC-Sanders wing. The practical problem he faces is that he’s up for re-election in 2023. To mount a credible presidential campaign, he would have to start the campaign early that year. So, he would have to make a choice, a probable re-election in Kentucky or a long-shot presidential run.

Michigan gov. Gretchen Whitmer has been mentioned. As horrible as the alleged attempted kidnapping was, it did cast her into the national spotlight. She didn’t come out looking great in her handling of the Covid-19 pandemic but would probably still have some appeal to the Democratic Mainstays and potentially Establishment Liberals.

Another ambitious governor is California’s Gavin Newsom who will likely feel emboldened by his big win in the recall election from September. He’s up for re-election in 2022, but a red wave would have to be a double tsunami to take him out. He has access to cash and would be acceptable to the Democratic Mainstays and Establishment Liberals. He could likely peel off some voters on the Progressive Left. But it’s not clear he would be particularly any Democrat primary voter’s first choice and he would be a poor general election candidate for a national race.

It doesn’t have to be a new face. Since Harris and Buttigieg are also-rans, let’s keep other also-rans in mind—such as Minnesota senator Amy Klobuchar, who placed third in New Hampshire in 2020, and second-tier candidates such as New Jersey senator Cory Booker and Washington governor Jay Inslee, who couldn’t gain support, and wouldn’t likely do much better in a second try. It seems likely that history has passed Klobuchar with Harris serving as vice president. It’s also tough to see what lane she really appeals to other than maybe Democratic Mainstays.

So, of those, candidates who stand a chance of building a coalition of primary voters and have a real shot in the general election are Harris—just by virtue of being vice president—Buttigieg, Beshear, and maybe Abrams.

Or, Biden makes a huge rebound and seems like a perfectly viable candidate for re-election in 2024—and this is all a moot point.