The Iranian Revolution Is a Historic Opportunity for the West 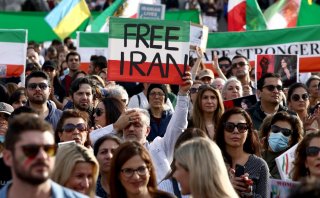 Earlier this month, Iran finally admitted to supplying drones to Russia to use in Ukraine. Iran’s disclosure comes amidst irrefutable concrete evidence that Iran-supplied combat drones were used to attack Ukrainian cities. Iranian officials, however, insisted that the drones were shipped before Russia’s invasion of Ukraine, a claim that U.S. officials refuted. Iran’s involvement in the Russo-Ukrainian War adds to its track record of foreign involvement in other parts of the Middle East.

Iran’s denials are meant to reduce criticism and scrutiny over its military behavior and alliance with Russia. In July, the White House released satellite imagery showing a Russian military delegation visiting Kashan Airfield south of Tehran near the Shahid Karimi unmanned aerial vehicle (UAV) base in central Iran, which is operated by the Islamic Revolutionary Guard Corps (IRGC) Aerospace Force, examining the Shahid-129 and Shahid-191 combat drones. Additional reports that IRGC officers were training Russian forces to operate the drones were confirmed when Ukrainian troops killed ten Iranian instructors in the Russian-occupied territories of Kherson and Crimea.

Iran’s mischief in Europe has been long overlooked mainly due to interest in the Joint Comprehensive Plan of Action (JCPOA), which the Biden administration intends to revive. As such, a diplomatic effort was exerted to push Iran to abide by the agreement and lift the sanctions imposed during the Trump administration. Assuming Iran was interested in such cooperation to reap the benefits of the deal, it would naturally have tried to build trust with European partners by not worsening the European security environment.

Iran’s behavior was deliberately ignored despite concerns about its ballistic missile program and support for proxies in the Middle East. U.S. National Security Advisor Jake Sullivan noted that Iran had provided similar unmanned aerial vehicles to the Houthi rebels in Yemen to attack Saudi Arabia before the ceasefire was reached earlier this year. The Houthis have used drones to attack oil installations in Saudi Arabia and the United Arab Emirates (UAE), with help and training from the IRGC. Iran’s assistance to the Houthis has helped perpetuate chaos in Yemen.

But if Iran’s involvement in the Middle East seemed like too distant a threat, the revelation of its involvement in supplying drones to Russia should lead proponents of the Iran deal to reevaluate their position. Ukrainian president Volodymyr Zelzenskyy stated that Iran’s involvement has prolonged the war and urged the international community to help thwart this Russo-Iranian alliance and prevent Ukrainian air defense systems from being overtaxed Moreover,  U.S. officials believe that Tehran is actively looking for alternative ways to continue with its nuclear program irrespective of Europe and the United States’ stance on the JCPOA. Experts indicated that Iran needs assistance with nuclear fuel fabrication, which could help it power its nuclear reactors and potentially shorten Iran’s breakout time to create a nuclear weapon.

Moreover, the Iranian regime views NATO as a significant threat. In a phone call with Russian president Vladimir Putin, Iranian president Ebrahim Raisi stated that “NATO’s expansion eastward creates tension and is a serious threat to the stability and security of independent states in various areas.” The convergence of these two allies will likely continue as Russia and Iran do not want their military and political ambitions to be constrained by the international community.

Iran’s involvement in Ukraine brings an increased awareness of the policy failures that allowed its peculiar alliance with Russia to emerge. A player like Iran, which has often been dealt with within the context of nuclear nonproliferation, now presents a conventional threat through its supply of cheap drone technology and ballistic missiles to Russia. It is essential to realize that the proliferation of conventional weapons and the Russo-Iranian alliance resulted from an ill-conceived policy that favored talking to hardliners to establish dialogue and minimize threats.

In fact, many Iranians, from protesters in the streets to political analysts, have highlighted the complicity of the West in turning a blind eye to the regime’s human rights violations. While Iranians have not been openly asking the West to rid them of the clutches of one of the most oppressive governments in the world, they believe that the West can do better by siding with them in their struggle for a representative government.

It should be noted that while the current protests certainly bear the hallmarks of revolutionary fervor, Iranians have protested in large numbers for the last several years. For example, during the 2019 Aban protests, the regime killed over 1,500 demonstrators while shutting down the internet for several days. They managed to put a lid on the protests only to pave the way for the current protests. During the 2019 Aban Protests, what marked the psyche of millions of Iranians was Europe’s attempts to revive trade with Iran and the JCPOA talks while de-emphasizing the extent of the protests.

With the recent announcement that Iran has exceeded the enrichment of uranium beyond peaceful purposes, attempts to tame the regime’s international, regional, and domestic behavior have hit rock bottom. The JCPOA, despite temporarily halting the regime’s nuclear program, gave Tehran free reign to ramp up its involvement in Syria, Yemen, and Iraq. The lack of emphasis on human rights violations under a supposedly moderate president, Hassan Rouhani, made many Iranian activists think that the West had thrown their concerns under the bus for the nuclear deal.

At this critical juncture, the West must remain cognizant of the tremendous challenges posed by the continuity of this regime. The Iranian regime poses a security risk to NATO, the Middle East, and its own people. The best course of action for Brussels, London, Washington, and Ottawa is not to legitimize this regime, avoid pinning their hopes on the nuclear deal, and support the Iranian people’s revolution for a representative government.

In the meantime, Iran continues to obfuscate. Iranian officials have publicly stated that U.S. and European officials tell them in private that they are eager to return to a nuclear deal while publicly asserting that they are not interested. The United States and Europe must unequivocally revoke the deal to deny the IRGC the capability to manipulate revolutionaries who are under a media blackout by the regime.

Iran’s activities in the Middle East and Europe point to an increasingly interconnected conflict that allows Tehran to entrench its influence through violence. But the synergy of interests should be a wake-up call for policymakers. Understanding that the geopolitical dynamics of the conflict in Europe connect with something as local as domestic unrest in Iran could reverberate across the Middle East and Ukraine. There is much to be gained from supporting the current grassroots movement in Iran, which could unravel the mischief engineered by the regime for years. Iranians protesting in the streets yearn for a representative government that can integrate with the rest of the world instead of existing as a pariah state. It’s a win-win for all.

Fatima Abo Alasrar is a Non-Resident Scholar at the Middle East Institute and a Senior Analyst with the Washington Center for Yemeni Studies.

Vahid Yücesoy is a Doctoral Candidate in the department of Political Science in Montreal.