Is the Second Iranian Revolution Here? 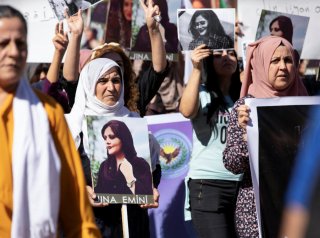 The brutal murder of a twenty-two-year-old Iranian woman, Zhina (Mahsa) Amini, at the hands of the Islamic Republic’s “morality police” for wearing her hijab “improperly” has sparked an unforeseen uprising across Iran calling for an end to the theocratic regime. The current demonstrations are the latest chapter in the Iranian people’s courageous movement against the Islamic Republic’s forty-three-year reign of oppression and terror against its citizens—and by extension the region. The brave women and men of Iran have started what could become the second Iranian Revolution.

In response to the protests, the Iranian government has blocked Internet access and unleashed violence upon the demonstrators, and President Ebrahim Raisi has threatened to “deal decisively” with anyone who breaks the regime’s laws. But it doesn’t stop with Raisi. Supreme Leader Ali Khamenei, who controls Iran’s coercive apparatus, emerged from his chamber after two weeks of silence only to blame the usual suspects: the United States, Israel, and the West as a whole.

The Islamic Republic’s mandatory hijab law fundamentally degrades human personality and is therefore fundamentally unjust. But the demonstrations are not just about Iran’s dress code, sham elections, broken economy, water crises, government incompetence, human rights violations, harboring of terrorists, or the murder of Iran’s youth. These demonstrations are against an unjust system of laws and government, a system that has dehumanized the Iranian people, as well as those in Iran’s sphere of influence from Beirut to Kabul, since 1979. The Iranian people and members of the Iranian diaspora abroad, therefore, are calling for an end to the system of the Islamic Republic of Iran.

In ending any system, it is important to unpack its name. Voltaire famously quipped that the “Holy Roman Empire” was “in no way holy, nor Roman, nor an empire.” Similarly, the Islamic Republic of Iran is neither Islamic, nor a republic, nor of Iran.

The regime’s absurd and vile interpretation of Islam goes against centuries of jurisprudence—you take away the regime’s guns and the power of its purse, and its theological foundations collapse.

The regime, which is run by an unelected few, is an insult to the concept of a republic, which the Oxford English Dictionary defines as a system “in which supreme power is held by the people and their elected representatives.” And most importantly, the regime is not “of Iran.” It is an anti-Iranian occupying force. It does not represent Iranians, their culture, or their history. The regime is an aberration in Iran’s 2,500-year history from the Achaemenid Dynasty to the last shah of Iran.

The core marker of an occupying force is that it blatantly and shamelessly does not care about the needs of the people it purports to govern and claims to represent. While many foreign policy analysts assume that every state acts in its own interests, these “experts” fail to distinguish between the regime and the state—let alone the nation. The regime in Tehran is an occupying force because it only cares about its own survival and future, not the interests of the Iranian nation. That is why it mercilessly kills its youth, brutalizes women, and quenches the slightest sight of dissent.

Compare the regime’s hierarchy of interests to that of Iran’s previous government when it was faced with mass demonstrations. For all his government’s faults and shortcomings, instead of clinging onto power and fighting until the last drop of blood, the last Shah of Iran, Mohammad Reza Pahlavi, left the country when it became evident that the only path to retain power was to crack down with brute and unforgiving force. The Shah—on his worst day—was far better than the Islamic Republic of Iran on any day over the last forty-three years. This is proof that the first Iranian Revolution was an abject failure and that a second Iranian Revolution is necessary to reverse it, bring an end to theocratic tyranny, and put Iran on the path toward secularism and freedom.

The West has always been wary of instability in the Middle East—there are legitimate concerns that once an illegitimate regime collapses, the chaos that follows unleashes the worst elements: radical Islamists. That may very well be the case in Iraq, Syria, Libya, and elsewhere, where a “secular” dictator’s demise unleashed a wave of religious extremism. But in Iran, it is the extremists who are at the helm. The alternative cannot and will not be of the same ilk.

Daniel Khalessi was the first Iranian-American President of the Stanford Law Review.