Iran’s Khamenei Blames the United States and Israel for Unrest 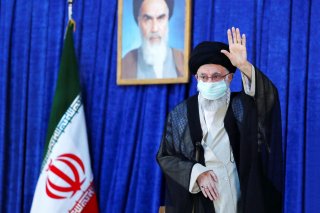 In his first public remarks in weeks, Iranian supreme leader Ali Khamenei claimed on Monday that the United States and Israel had incited the ongoing protest movement surrounding the death of Mahsa Amini—alleging that the two nations were “conspiring” against Iran’s clerical system of rule.

“I say explicitly that these riots and this insecurity were a design by the U.S. and the occupying, fake Zionist regime [Israel],” Khamenei said during his speech, delivered to the graduating class of a police university in Tehran. “[There are] those who are paid by them, and some traitorous Iranians abroad helped them.”

The eighty-three-year-old supreme leader also denied police culpability in the death of Mahsa Amini—who Iranian officials claim died of a heart attack but who eyewitnesses claim was fatally beaten in police custody—describing the incident as an “accident.”

“A young woman passed away, which … pained us,” Khamenei said. However, he argued that the demonstrators had not waited for an investigation into Amini’s death before launching street protests. The supreme leader claimed without evidence that demonstrators had “burn[ed] Qurans” and had “take[n] hijabs off covered women” during the protests, which he speculated was “not a normal, natural reaction” to anti-government sentiments.

In his remarks, Khamenei also claimed that foreign elements had sponsored the protests in order to undermine the development of Iran’s economy following the large-scale imposition of sanctions in 2018. “They feel that the country is progressing towards full-scale power, and they can’t tolerate this,” he said.

The Iranian leader’s comments came in the aftermath of an increase in violence across the country over the weekend—particularly in Tehran, where hundreds of university students were arrested, and in the southeastern Baluchistan region, where a shootout between ethnic separatists and members of the Islamic Revolutionary Guard Corps (IRGC) left at least twenty dead. Iranian Kurds were the first to protest the death of Amini, who was Kurdish; as the protests have grown domestically, the Iranian military has launched strikes against Kurdish secessionists in neighboring Iraq, claiming that they were attempting to instigate clashes between protesters and security forces and had launched cross-border raids.

Khamenei downplayed the significance of ethnic separatism in his remarks. “The ethnic Kurds are also among one of the most advanced groups in Iran who love their homeland, Islam, and the establishment,” he said—although the nationwide protests began in Iran’s Kurdistan region and have remained strongest there.