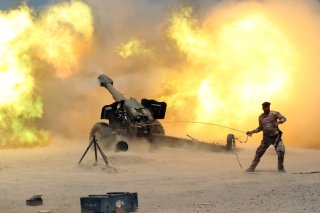 The government of Iran launched a series of drone and missile attacks against territory within the Kurdistan region of northern Iraq on Tuesday, resulting in at least thirteen deaths and dozens of injuries, according to local officials.

The attacks—reportedly targeted at an Iranian opposition movement headquartered across the border in Iraq—were the latest in a series of Iranian strikes targeting Iraqi Kurdistan over recent weeks, following Iranian complaints that Kurdish groups were attempting to fuel an anti-government protest movement within Iran. Iraq’s Foreign Ministry condemned the attack as a “unilateral and provocative action,” stating that it would “complicate the security scene … and will only contribute to more tension.”

U.S. National Security Advisor Jake Sullivan also condemned the attack, describing it in a statement as an attempt to “deflect blame from [Iran’s] internal problems and the legitimate grievances of its population” reflected in Iran’s ongoing protest movement.

The protests in Iran began on September 16 after Mahsa Amini, a twenty-two-year-old Iranian citizen and ethnic Kurd, died under unclear circumstances shortly after her arrest by the government’s morality police. Although the Iranian government claimed that Amini had been hospitalized after suffering a heart attack while in custody, others who were arrested at the same time claimed that the morality police severely beat her, causing her to fall into a coma and die three days later. The nature of Amini’s infraction—failing to properly wear a headscarf, a crime under Iran’s theocratic law code—catalyzed the protest movement, prompting millions of Iranians to take to the streets across the country. In the first days of the movement, videos circulated widely on social media depicting demonstrators clashing with Iranian security forces in the street, while Iranian women have filmed themselves dancing, cutting their hair, and burning their headscarves.

In addition to striking anti-government factions outside Iran, the Iranian government has attempted to crack down on the protests inside the country, leading to street violence and at least seventy-six deaths. Iranian authorities have also severed internet access across the country in an attempt to prevent protesters from organizing, although some demonstrators have evaded government restrictions through the use of virtual private networks, or VPNs.

Although precise figures on the number of demonstrators are difficult to determine, the protest movement is thought to be the most serious challenge to the Islamic Republic since 2009, when a disputed election led to months of anti-government demonstrations.