It’s Time to Get Serious About Eritrea 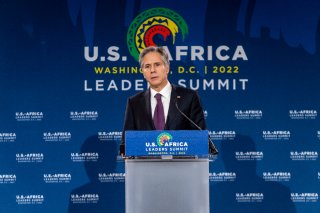 “Africa’s success and prosperity is essential to ensuring a better future for all of us,” declared President Joe Biden at last month’s U.S.-Africa Leaders Summit. Africa has many success stories and ready partners—Botswana, Ghana, Kenya, Morocco, Namibia, Somaliland, and South Africa are all democracies. Biden is less picky. While he signaled at the summit that he would turn a blind eye to corruption and human rights violations, some countries remained beyond the pale. At the top of that list is Eritrea.

This year marks the thirtieth anniversary of Eritrea’s independence. There was optimism when Eritrea won independence. After years of fighting culminated in the defeat of Ethiopia’s Marxist dictatorship, Eritrean leader Isaias Afwerki and Ethiopian interim president Meles Zenawi agreed to a peaceful divorce. Both countries disappointed as their leaders sought to consolidate dictatorship. Zenawi transformed Ethiopia into an authoritarian state, while Isaias preferred a totalitarian model. Today, Freedom House ranks Eritrea lower than even North Korea on its civil liberty index.

Three decades of Isaias’ mismanagement have left Eritrea a failure. Eritrean per capita income hovers around $50 per month. Absent remittances from the many Eritreans who fled to North America, Europe, or the Middle East, Eritrean income would fall by half, below even South Sudan’s. Eritrea’s capital, Asmara, is among the world’s most beautiful cities, and the country sits aside one of its most important waterways. With competent management, Eritrea might have transformed itself into a regional Dubai. Instead, under Isaias, Eritrea has become a modern-day slave state under the guise of mandatory, indefinite conscription.

Eritreans have no freedom of speech and little religious freedom. The Eritrean embassy in Washington’s attacks on the United States Holocaust Museum are merely par for the course. The Isaias regime recognizes only four religions—Sunni Islamism, Orthodox Christianity, Roman Catholicism, and evangelical Lutheranism—and it places strict restrictions on even their freedoms. The regime forbids any religious practice among those conscripted into the military, for example. While Western media and politicians have criticized China for imprisoning Hong Kong cardinal emeritus Joseph Zen, Isaias has done the same in Asmara, only releasing the city’s bishop days ago after two months of detention on charges that were never released. Eritrea, however, is not only a human rights tragedy—it’s a security threat.

How Eritrea Destabilizes the Region

It is one thing to condemn your compatriots to misery; it is another thing to spread it. While Biden was willing to rehabilitate Ethiopian prime minister Abiy Ahmed, a man responsible for the deliberate starvation of hundreds of thousands of Tigrayans, he ignores that Isaias, as Abiy’s partner and mentor, is not a signatory to Ethiopia’s tenuous ceasefire. The Eritrean Army continues to treat Tigray as the Russian Army treats eastern Ukraine. The killing of World Health Organization director Tedros Adhanom’s uncle by Eritrean troops made headlines, but it is a story repeated thousands of times over against lesser-known Tigrayans. That Abiy allows such Eritrean actions on Ethiopian territory shows his insincerity, impotence, and collaboration. Ethiopian nationalists talk big, but Abiy has subordinated 118 million Ethiopians to 6 million Eritreans.

Isaias is not content to put only Ethiopia under his thumb. Recently, he also sponsored unrest in Djibouti and sought to interfere in the tense situation in Sudan. Indeed, his axis with former Somali leader Mohamed Farmaajo destabilized Somalia. At one time, he also considered attacking Somaliland in order to gain a port on the Red Sea.

Isaias grows more erratic every year. Eritrean foreign and military policy has become the African equivalent of George Orwell’s 1984: there will always be a conflict, though Isaias’ allies and adversaries may change on a dime depending on his mood or latest paranoid conspiracy.

Eritrea’s embassy in Washington is a den of organized crime whose main victims are the Eritrean diaspora. This should be a national security and law enforcement concern for American citizens. The United Nations Security Council and U.S. law prohibit the imposition of Eritrea’s tax on former citizens regardless of their current citizenship status. While the United States also taxes expatriates—a bad policy—the situations are not analogous. The White House doesn’t assert its authority on those who have forfeited U.S. citizenship, nor does it threaten to retaliate against the family members of those who resist extortion. Simply put, if Eritrean envoys insist on acting as Mafiosi rather than diplomats, it is time to close the Eritrean embassy. The State Department should be under no obligation to perpetuate the illusion of the Eritrean regime’s legitimacy.

Rep. Chris Smith (R-NJ), long the chairman or ranking member of the House Foreign Affairs Committee’s Subcommittee on Africa, Global Health, and Global Human Rights, has been at the forefront of efforts to nudge and coerce Eritrea toward a more responsible direction. Against the backdrop of Eritrea’s rape and pillaging of Tigray, Smith proposed a number of specific sanctions to target Eritrean regime revenue. None of these should be controversial. Four months later, Biden ordered the Treasury and State Departments to identify sanctions targets and declared a national emergency over Tigray. The Treasury Department ultimately sanctioned a number of entities identified by Smith: the Eritrean Defense Force; the ruling People’s Front for Democracy and Justice; Eritrean National Security director Abraha Kassa Nemariam; the Hidri Trust, which controls most Isaias-held businesses, and its day-to-day manager, Hagos Ghebrehiwet Kidan; and the Red Sea Trading Corporation. Biden could go further. Smith identified other revenue producers, like the Bisha Mine, where Isaias allegedly used conscripts as slaves. The Treasury Department might also re-designate Presidential Advisor Yemane Gebreab, perhaps the most influential man in Eritrea after Isaias.

Military academies teach the DIME Model, which states that every coherent strategy should have diplomatic, informational, military, and economic components. To date, the United States has largely limited its efforts to sanctions. There are two problems with a sanctions-only strategy. First, Isaias cares nothing about the Eritrean people. Second, bilateral and international trade with Eritrea is minimal, so the outside world has limited financial leverage.

The State Department has long lacked a diplomatic strategy to accompany sporadic U.S. sanctions. Both Israel and the United Arab Emirates have traded cash for access to Eritrea’s military facilities or territory in order to run regional counter-terror operations. Eritrea, however, is not indispensable. The Berbera Airport in democratic Somaliland would bring the same geographical advantages as Eritrea’s Assab Air Base without the baggage that subsidizing Isaias brings. Rather than compartmentalize the Eritrea problem to a single desk or regional bureau, Secretary of State Antony Blinken should pressure each Eritrean partner to abandon the Isaias regime. Such a diplomatic campaign might be difficult, but the dividends would be great. African states would welcome the opportunity to have the Isaias threat reduced. Additionally, seeing American leadership in practice rather than only in rhetoric would enhance America’s regional credibility.

The United States also lags behind in its information strategy. Isaias’ rule depends in part on his ability to cut Eritreans off from the outside world. Reporters Without Borders ranks Eritrea’s media freedom as the second worst in the world. Voice of America broadcasts in Tigrigna, but for only thirty minutes per day. Many of the programs are anodyne and steer clear of political news. If Washington is serious about Isaias’ pariah status, it is time to sharpen news broadcasts, give more space to opposition voices, and broadcast to Eritrea for longer periods.

The United States also lacks a military strategy. With the exception of Secretary of Defense Lloyd Austin, who does not regularly have Biden’s ear, Biden’s national security team hails almost entirely from the Ivy League and the State Department. Few, if any, members of Biden’s team have any experience with the military. The rhetoric about “forever wars” and the administration’s ignorance of deterrence are symptomatic of a tendency to downplay military components of U.S. strategy. The U.S. military should never directly involve itself in Eritrea, but a more robust military presence in the Horn of Africa would amplify diplomacy by signaling investment in regional security. This is yet one more reason why the State Department’s hostility toward rotating American forces through Somaliland is so counterproductive.

The End Game in Eritrea

Almost every U.S. administration pays lip service to Africa, but few sustain attention. Biden is no different, despite the fanfare of last month’s summit. Compounding the strategic neglect is U.S. foreign policy’s traditional reactive nature. For three decades, this has meant kicking Eritrea policy down the road. But that road now ends. Isaias is increasingly erratic. Simultaneously, he is in the twilight of his rule. Even if rumors of Isaias’ poor health are false, at seventy-six years old, his life expectancy is limited.

The United States must plan for Eritrea’s transition upon Isaias’ death. It would be a human tragedy if Isaias’ son or any of the Eritrean dictator’s top lieutenants succeeded him. That will occur, however, if the State Department and the National Security Council do not plan now. Isaias’ greed, incompetence, and selfishness have condemned millions of Eritreans to misery. Eritreans are thirty years behind where they might otherwise be, but it still is possible to catch up. For a fraction of the $500 million the Biden administration seeks to spend funding the Palestinian Authority, West Bank, and Gaza, for example, Biden could develop a Marshall Plan for a post-Isaias Eritrea that could enable one of the world’s most reclusive states to join the international community in earnest. To do nothing, however, would condemn Eritreans to suffer and provide an opening for Russia, China, or other reactionary states to expand and cement their Red Sea foothold. It is time to get serious about the Eritrea problem. The decisions made by Biden’s team today will have an outsized impact on democracy, economics, and security in Eritrea and the broader Horn of Africa and Red Sea regions.