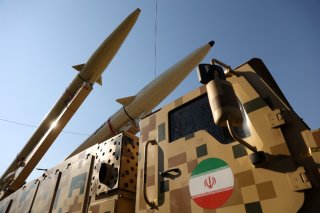 A recently published article in the Wall Street Journal revealed that Iran, despite the immense sanctions program in place since 2018, has managed to acquire revenues amounting to tens of billions of dollars each year via an intricate illicit banking and finance system, operating largely unnoticed by American inspectors. With proxy groups present in Lebanon, the Palestinian territories, Syria, Iraq, Afghanistan, and Yemen, Iran’s illicit trade has likely financed a range of activities across the entire Middle East with training, weapons, and more general funds, all in service of furthering the Islamic Republic’s regional political aspirations. Such activities posed a direct threat to U.S. assets or those of the United States’ allies on multiple instances. A missile fired by the Islamic Revolutionary Guard Corps hit the construction site of the new American consulate in Erbil on March 13, while Iranian-enabled Houthi missiles attacked an Aramco facility in Saudi Arabia on March 25 and the United Arab Emirates’ (UAE) capital, Abu Dhabi, on January 24, to name but a few recent incidents.

Since the initial days of its drafting, the Joint Comprehensive Plan of Action (JCPOA) has compartmentalized security concerns by focusing on the single most pressing matter of nuclear weapons, leaving out a range of additional security threats to regional stability posed by Iran. While the U.S. Department of the Treasury has repeatedly recognized and sanctioned Iran’s illicit trading activities, even before the original JCPOA in 2015, U.S. foreign policy officials have mainly dismissed the operations that such funding enabled as beyond the grasp of the revived negotiations in Vienna. The JCPOA seems to have stood independently of various other foreign policy considerations—a position that the United States will find increasingly difficult to hold.

On the one hand, the U.S. administration is trying to conclude the deal as quickly as possible and guarantee closer oversight over Iran’s nuclear program and the simultaneous resumption of oil exports to the global market. However, such a policy stance risks alienating key regional allies, Israel, Saudi Arabia, and the UAE, which have been decrying the JCPOA as not comprehensive enough in its aspirations to prevent Iran’s regional encroachments. While a revived deal would provide the United States with closer oversight over nuclear matters, it would also grant Iran an opportunity to revitalize its economy and further bolster proxy initiatives.

On the other hand, Iran wishes to see the United States remove the Revolutionary Guards from its Foreign Terrorist Organization (FTO) list and hopes to receive guarantees that the JCPOA will stay in place for years to come before singing a final agreement. The latter condition is one that the current U.S. administration could never commit to, especially in light of fervent opposition from Republican senators as well as a group of Democratic representatives, who have cited similar concerns over the deal.

As an additional factor, Russia’s war in Ukraine has filtered into negotiations that the United States simply cannot ignore despite public statements. At what seemed like the final stage of the talks just a few weeks ago, Russia announced its demands for its dealings with Tehran to be exempt from sanctions imposed on it by the West for its invasion of Ukraine. As a full member of the Joint Commission of the JCPOA, which requires consensus to approve decisions, Russia will use all its leverage to alleviate the costs of its war with Ukraine. The two issues have now become inexorably linked, posing an addiction challenge to an already complex situation.

Altogether, the current impasse presents an opportunity. Rather than trying to conclude the deal in its current form by hook or by crook, the United States should ride out the storm by committing to diplomacy, however long the process might take. European energy demands will be lower over the spring, summer, and early fall, granting Western parties a few more months to explore and secure oil and gas import alternatives to Iranian reserves. On the one hand, the war in Ukraine might present an agreement between warring sides. A lull in fighting would allow the United States to relieve some sanctions on Russia in exchange for the latter’s return to the originally agreed-upon conditions of the JCPOA. Meanwhile, continued commitment to the Vienna talks can serve as an acceptable degree of guarantee to the United States that no major Iranian break with the deal will occur regarding the enrichment of uranium to weapons-grade levels.

In the case that the war in Ukraine is protracted—and Russian insistence on the new terms persists with it—the United States, and indeed its allies in Europe, will not be able to afford to alienate their partners in the Gulf by sticking to a deal the latter clearly do not favor. This is arguably an outcome that all sides should avoid at present too.

But in addition to the fact that Russia’s demands cannot be ignored, the United States also has an opportunity to gain more than what it bargained for initially. Even if the negotiators cannot convince Iran to agree to a full stop of its proxy activities within the body of the JCPOA, the United States can still bargain for a clause that would link the JCPOA’s full implementation to progress made in additional policy areas of concern.

Likewise, the JCPOA in and of itself cannot guarantee Iran’s full reintegration into the global financial system or the restoration of its economic strength to levels prior to the implementation of international sanctions. While the JCPOA would unlock some funds, the issues of illiquidity and inconvertibility mean that more than $50 billion of Iran’s resources would be tied up as collateral. At the same time, a majority of its assets would be denominated in local currencies. Furthermore, there is no guarantee that Western financial and investment institutions would want to navigate Iran’s uncertain market in the face of issues such as terrorism, missile strikes, lack of transparency, failure to comply with international financial standards, and concerns over illicit activities.

While clandestine import/export transactions amount to around $80 billion a year, Iran would gain more from fully restoring its trade and foreign direct investment ties by yielding to foreign demands to curb its illicit operations. However, this trade-off is impossible to achieve without making some progress outside the field of nuclear matters.

In the low-probability scenario that the JCPOA deal falls through, sanctions will remain in place, and Iran will continue its illicit financing activities, which have become an essential part of the Islamic Republic’s economy. In the sub-optimal case that both sides approve the deal, Iran will likely continue developing its illicit economy. By linking Iran’s additional demands to the full-scale implementation of the deal, the United States might have a small, albeit viable, window of opportunity to conclude the nuclear deal, curb Iran’s illicit financial operations, and cater to the sensibilities of regional allies. The United States must seize this window of opportunity while it’s still open, setting the terms of engagement between it, its European partners, and Iran for decades to come.

Patrik Kurath is the executive vice president of the Middle East and North Africa Forum, a think tank based at the University of Cambridge.