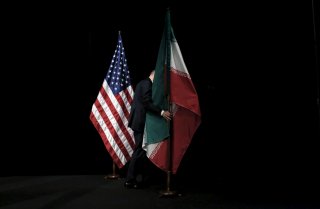 The Office for the Director of National Intelligence’s Annual Threat Assessment that was published on April 9, 2021, asserts that government officials  “expect that Iran will take risks that could escalate tensions and threaten U.S. and allied interests in the coming year.”  Iran’s maximalist strategy to heighten regional instability aims to leverage the United States to lift Iranian sanctions at the Vienna nuclear talks as a prerequisite for Tehran to resume compliance with the 2015 Joint Comprehensive Plan of Action (JCPOA).

This strategy has encouraged the Iranian regime to confront U.S. regional allies as was witnessed in the recent conflagration between Israel and Hamas.

Iran provides Hamas with the blueprint and technical capability for Hamas to manufacture rockets. Iranian military leaders recently praised Hamas’s strikes on Israel and pledged to continue arming and funding Hamas in its bid to destroy the Jewish state. To this end, Iran transfers finances, technological know-how to produce weapons to Hamas and Islamic Jihad. On May 15, 2021, Islamic Revolutionary Guard Corps Commander Maj. Gen. Esmail Ghaani contacted Qatar-based Hamas leader Ismail Haniyeh and Islamic Jihad leader Ziyad al-Nakhalah. Ghaani expressed Iran’s support for Palestinian “resistance”. Similarly, Nasir al-Shammari, deputy leader of Hezbollah al-Nujaba in Iraq offered a willingness to transfer weapons to Hamas and participate in the fighting against Israel. Both Hamas’s Qassam Brigades and Islamic Jihad have noted the use of Iranian ordnance, including the Kornet ATGMs, Sejjil and Badr-3 missiles, in their bombardments of Israeli towns. Islamic Jihad leader Ziad al-Nakhala told the pro-Iran al-Mayadeen channel on Dec. 1, 2020, “All the conventional weapons reached Gaza via al-Hajj Qassem Soleimani, Hezbollah and Syria, and the entire resistance axis played a part in transporting them . . . There are training camps in Syria where our brothers in Hamas received special training to produce the rockets.”

Iranian defense minister Brig. Gen. Amir Hatami said Iran’s support for Hamas’s missile arsenal has created a “nightmare for the Zionists.” Thus, in the aftermath of the cessation of the recent conflict between Hamas and Israel, Fathi Hamad, a member of Hamas’s politburo, declared, “With the end of the Israeli regime’s latest aggression, the Palestinian resistance has resumed the process of rocket production.”

While Hamas fired over four thousand rockets at Israel, thousands remain left in its arsenal. Despite Israel’s multiple strikes at Hamas’s infrastructure, Iran maintains the capacity to reactivate Hamas attacks at will as part of its broader geopolitical aims to leverage nuclear talks for sanctions to unravel. A new Iran deal will grant billions of dollars in sanctions relief that will fund Iran’s terror proxies like Hamas and Hezbollah.

Overlooking Iran’s destabilizing activities towards U.S. regional allies is accompanied by the Biden administration’s failure to define its strategic objectives in the region. On the campaign trail, Biden called for treating Saudi Arabia as a pariah due to the Khashoggi killing, and recently placed sanctions and visa restrictions upon Saudi officials. Furthermore, the Biden administration in February 2021 delisted the Houthis from being designated as a Foreign Terrorist Organization. This is despite the increasing trend of the Houthis conducting cross-border attacks. U.S. special envoy on Yemen Tim Lenderking expressed that Iran's provision of weapons to Yemen's Houthis is “quite significant and it’s lethal.” Recently, Houthis attacked the southern Saudi city of Jazan, threatening Aramco with missiles and drones. In March 2021, the Saudi-led coalition prevented an “imminent” attack by destroying two explosive-laden boats. The United States’ lack of response was not lost on Iran as it was similar to Iran’s attack on Abaqaiq, an oil processing hub of Aramco, in September 2019 despite former President Donald Trump threatening that the United States was “locked and loaded.” Furthermore, overlooking Iranian sponsorship of terrorism is provocative may lead to Iran increasingly willing to directly target U.S. assets such as military installations in Saudi Arabia as it did in 1996.

The United States’ hands-off approach towards Iran is directly contributing to the Iranian regime’s belief that it will not suffer any consequences for violating U.S. sanctions and advancing its destabilizing regional strategy. As a result, Iran is expanding its range of attacks which heightens regional tensions. In Dec 2020, Iran violated sanctions by openly shipping oil to Venezuela in exchange for gold. Iran in April 2021, seized a South Korean-flagged tanker as a hostage to receive billions in frozen oil funds.

This is causing Saudi Arabia to seek to overcome its sense of vulnerability by exploring closer defense and security ties with Israel. Both countries are conducting independent regional operations without concert with the United States.

This is a direct result of the United States’ unwillingness to exercise its leadership in the Middle East that can lead to an uptick in regional tensions. Thus, as Israel’s outgoing prime minister, Benjamin Netanyahu, asserted, “If we have to choose, I hope it doesn’t happen, between friction with our great friend the United States and eliminating the existential (Iranian nuclear) threat — eliminating the existential threat” wins.

In the absence of the United States’ willingness to hold Iran to account, in April 2021, Israel attacked, the Savaz an Iranian ship used by the IRGC for spying. That same month Iran responded by attacking an Israeli ship off the UAE coast. Israel has allegedly attacked twelve ships illegally carrying Iranian oil to Syria since 2019 in an Iranian bid to finance Hezbollah. Between 2017 and 2020, Israel has also conducted an aerial campaign of one thousand airstrikes on Iranian assets in areas including Iraq, Sudan, Syria and Lebanon.

It is not possible to treat the security concerns of U.S. allies as distinct from the Iranian menace. Israel’s cyberattack on Natanz, Iran’s main enrichment facility in April 2021, led the Biden administration to express embarrassment as the US seeks to initiate talks with Iran. In response, a Syrian missile was fired in the direction of Israel’s Dimona nuclear reactor in April 2021 and Iran announced that it would be raising uranium enrichment to 60 percent.

The willingness of U.S. allies to operate independently results from the perception that the United States’ bid to offer concessions to Iran is due to its shifting attention to geopolitical challenges posed by China and Russia, which have been leading the United States to maintain a light footprint in the Middle East. It is through this prism that Iran views the United States’ attempt to withdraw  U.S. troops from Afghanistan by Sept. 11, 2021, alienate Saudi Arabia and reject Israel’s concerns on negotiations with Iran.

Successful nuclear negotiations are contingent upon the United States assuring its allies that it will remain committed to regional stability and stop the Iranian menace in its tracks. This entails the U.S. providing support to Saudi Arabia, the UAE and Israel that will lead Saudi Arabia, UAE and Israel to coordinate its regional strategy with the US. In turn, this may contribute to a more conducive regional context for negotiations with Iran to proceed. Being stretched in opposite directions between the Asia-Pacific region and the Middle East must not obviate the United States from formulating a coherent Middle East strategy as this poses the threat of alienating allies while emboldening adversaries.

Barak M. Seener is the CEO of Strategic Intelligentia and a former Middle East Fellow at the Royal United Services Institute (RUSI). He is on Twitter at @BarakSeener.