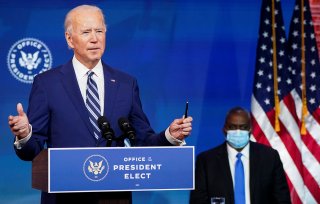 President-elect Joe Biden has tapped retired Army Gen. Lloyd Austin to lead the Defense Department. What can Austin’s nomination tell us about the direction of U.S. military doctrine under a Biden administration?

Austin has served in a series of distinguished positions over the course of a forty-one-year military career that ended with his retirement in 2016. As the assistant commander of the 3rd Infantry Division during the early stages of the Iraq War, Austin is widely credited with the Army’s successes in Baghdad. Austin’s service record during the invasion of Iraq propelled him to the Army’s higher echelons; following a flurry of promotions in subsequent years, Austin went on to become the commanding general of all U.S. and coalition forces in Iraq. From there, Austin became vice chief of staff to the Army in 2012 and, eventually, commander of U.S. Central Command in 2013.

Austin enjoys a near-unanimous rapport with the military. Michael O’Hanlon, a senior fellow at the Brookings Institution, described him as a “soldier’s soldier.” “He is popular among many troops that served under his command over the past couple decades, as I can attest from a number of conversations over the years,” O’Hanlon said. Despite being frequently described by Washington insiders as a “team player,” Austin has intermittently broken ranks with Washington military policy orthodoxy—particularly over his skepticism of Middle-Eastern military entanglements. Austin reportedly expressed concerns over the strategic direction of the Obama administration’s efforts to combat the spread of the Islamic State, arguing that the thrust of the military effort should be in Iraq even as the Obama administration increasingly invested itself into regime change in Syria. Austin later testified that the U.S. policy of training “moderate Syrian fighters” as a local wedge against the Islamic State had borne little fruit. In that same testimony, Austin took a forceful stance against the then-popular, bipartisan push for a no-fly zone in Syria: “I would not recommend a buffer zone at this point in time,” stated Austin upon being repeatedly questioned on this point by the late Senator John McCain.

Opposition to Austin’s nomination runs across two broad themes. The first is the argument, fielded by a wide substratum of American political discourse, that the appointment of a retired general undermines the principle of civilian control over the military. There are those who say that Austin’s recent military service is inherently disqualifying. Federal law prohibits military officers from serving as the defense secretary within seven years of their retirement, which means that Austin can only accept the nomination with a waiver provided by congressional vote. There have only been two such cases in the postwar period—one for Army Gen. George Marshall, and the other for retired Marine Gen. James Mattis. It remains to be seen how the 151 House Democrats who voted against Mattis’s waiver will navigate Austin’s upcoming confirmation process.

The second objection reflects the concern that Austin’s range of policy experience is too regionally-restrictive. ”Biden is rightfully focused on [Austin’s] strength in logistics that pertains to combating the pandemic,” Bonnie Glaser, a senior adviser for Asia and the director of the China Power Project for The Center for Strategic and International Studies, told the Japan Times. “But experience in counterinsurgency efforts in the Middle East is not what we need to deal with threats in the Indo-Pacific.” Austin’s proponents in Washington have pushed back against the suggestion that ongoing U.S. military operations in Asia could be hamstrung by Austin’s nomination: “I can assure you that neither free navigation in the South China Sea nor the security of the Third Island Chain will be imperiled merely because a former Army general is defense secretary,” Earl Matthews wrote in an op-ed published by the Washington Post. “The idea that the defense secretary must be an expert on China, or an Asia policy wonk is without merit . . . he or she must be a generalist with a broad strategic vision ready to meet any global challenge,” added Matthews, who served as principal deputy general counsel of the U.S. Army and as deputy assistant to President Donald Trump, in addition to being a senior director for defense policy and strategy on the National Security Council.

While Austin’s appointment is not necessarily consequential for Biden’s China policy, it sends a clear signal within the broader context of the President-elect’s assembled foreign policy team.  It is not in the defense secretary’s purview to formulate U.S. grand strategy against peer competitors, but Biden’s decision to nominate Austin—especially over Obama-era Undersecretary of Defense Michele Flournoy, a long-speculated potential nominee with an established record of taking a hard line on China—poses yet another affirmation that the coming Biden administration is unlikely to pursue measures that might intensify U.S.-China military competition in the Asia-Pacific region.