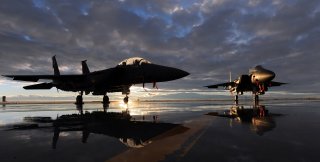 U.S. weapons sales to Middle Eastern countries help keep them from “turning to China,” the top commander of U.S. forces in the region said.

But he claimed that Central Command’s area of responsibility, which covers the Middle East and Central Asia, would also be a stage for great power competition.

“Competition between global powers does not occur in neatly designated areas,” he said at an event hosted by the Middle East Institute. “You don't have the luxury of focusing on only one theater.”

The United States sent a little over half of its arms exports to the Middle East over the past five years, and a full 25% of U.S. arms exports in this period went to Saudi Arabia, according to data collected by the Stockholm International Peace Research Institute.

Arms sales to Saudi Arabia are particularly controversial in American politics as the Saudi-led coalition fights a brutal war in Yemen.

The Trump administration is under fire for circumventing Congress to sell $8 billion in weapons to Saudi Arabia and two other Middle Eastern monarchies last year.

Lawmakers are now investigating the State Department for allegedly quashing an investigation into the deal.

McKenzie argued that U.S. arms sales are not just about weapons systems, but also “the assurance of the United States that stands behind those systems.”

He said that China is now moving into the region “principally economically, to establish a beachhead, and other things will follow over time.”

“China gets fifty percent of their oil through the Straits of Hormuz,” McKenzie said, referring to a body of water between Iran and Oman. “Additionally, there are vast mineral and other deposits in the theater that China would certainly like to have access to, and they would prefer to do it under somebody else’s security auspices, but who knows what their design will be in the long term?”

But the general acknowledged that the U.S. military has “optimized” for Middle Eastern conflicts “at the cost of certain other things.”

“Meanwhile, we were being studied by China and Russia,” he continued. “They gained a march on us in studying our strengths and weaknesses and preparing for a long-term competition.”