The Key to Creating a Global Anti-Corruption Vaccine 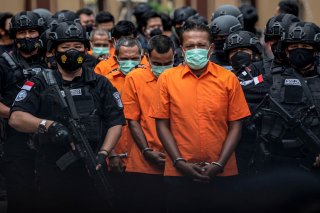 This draws a parallel between the concepts that if the only tool you have is a hammer, then treat everything as a nail, and this leads to the danger of treating the symptoms of corrupt governments with the hammers of military action instead of treating the cause. From a U.S. perspective, the case studies from which lessons learned are clear. The inability to deal with a corrupt Kuomintang regime in its fight against the Chinese Communists during the Chinese Civil War, the pervasive and corrosive corruption that gripped South Vietnamese leadership and undermined the U.S. war effort, the backing corrupt leaders from the Philippines to Lebanon, Iraq to Afghanistan, and elsewhere. It always ended badly. The results are no less dismal for other Western powers.

Placing corruption within the realm of a national security threat is timely for the Biden administration—but long overdue from a U.S. perspective. If a person examines military action from Syria to Iraq to Afghanistan, then that person cannot gloss over the importance of how systemic corruption in these countries was a key factor in causing instability and preventing the resolution of challenges.

In other countries, corruption has also led to instability, conflict, and violence. High levels of corruption and the absence of accountability and transparency are primarily consequences of governance failures and weak rule of law. In the globalized world, bad governance becomes a liability. Areas with poor governance create vacuums of power easily exploited by traffickers, criminals, insurgents and terrorists. Walking the clock backward to examine how events unfolded in Ukraine is a clear example of how corruption, too long ignored, finally boiled over with disastrous consequences that are still being felt not only in Ukraine but throughout Europe. Rejecting corruption was the foundational theme during the 2011–12 Russian protests. Protests that may have rattled Russian president Vladimir Putin to the point that shaped his reactions to later events in Ukraine. The list is long. There were serious protests and public discontent over corruption in Hungary, Romania, Bulgaria, Slovenia, in the Western Balkans, and elsewhere in Central Europe.

A study by the Carnegie Endowment for International Peace showed a visible correlation between indices of violence, instability and corruption, showing that countries characterized by rampant corruption tend to suffer conflict and state failure. In fact, twelve of the fifteen lowest-ranked countries in Transparency International’s Corruption Perception Index 2013 suffered from some sort of violent extremism, terrorism, insurgency, or other similar threat to international security. Countries such as Libya, Syria, Afghanistan, Sudan, Iraq and Yemen are in this category.

What is corruption? While there is no single universally accepted definition of corruption, there is wide acceptance of the Transparency International’s definition citing, “the abuse of entrusted power for private benefits.” Economically, corruption is a crime of opportunity that criminals are eager to exploit when the gains outweigh the consequences of being caught. It occurs everywhere but thrives where rule of law is weak and where the monopoly of power over the allocation of resources (public and private) is combined with individual discretion and the absence of accountability. For corruption to flourish, the value of derived income must be sufficient to offset the penalties associated with such acts.

Pervasive levels of corruption create fragile states by limiting effective democratic governance. The rule of law fails when rules and regulations are circumvented by bribes, public management is undermined by illicit money, and free media is silenced through political control. We can see all too many cases where corrupt countries become trapped in a vicious downward spiral leading to the “institutionalization” of corruption. Social and economic inequality causes a loss of confidence in public institutions that result in turmoil and social instability.

To anyone who looked, it was that the public resentment against corrupt government officials was the cause of the Arab Spring. While the Arab Spring captured the media’s attention, across Africa, the Western Hemisphere, particularly Mexico, Central and South America, and much of Asia, the impact of corruption was no less severe and continues to this day. The situation is so dire in Mexico and the Americas that governmental implosions are a concern. Corrupt officials point to transnational criminal organizations and drug cartels as the cause while they conveniently accept payoffs that enable the very criminal activity. Looking to Asia, we find the same problem. In every situation, it works to the detriment of state security and civil society.

Simply put, systemic corruption leads to political instability. Like a social pandemic, it destroys economic value, thwarts development, victimizes ethical people and businesses, perverts policies, and undermines democracy. In an era of great-power competition, it is important to recognize the multi-vector consequences of how corruption affects democracies, economies, and geopolitical relationships.

Unfortunately, we are witnessing a period of pervasive corruption with little true accountability. Civil societies continue to pick up the costs while corrupt elites move illicit proceeds around the world. The corrupt, using a variety of techniques from corporate service providers to shell companies and secrecy jurisdictions that obscure beneficial ownership, move and consolidate their ill-gotten gains until they can be safely invested in stable western capitals where illegal money is protected by rule of law and strong institutions. This cycle begins in countries with poor laws, unethical financial advisors, and banking institutions that are seldom held accountable.

In the last thirty years especially, the unprecedented speed of globalization has both exposed and accelerated large-scale corruption and diminished the authority of governments through the expansion of free trade, open borders, free movement of goods, and new technologies. The push for globalization and liberalization at the beginning of the 1990s opened a new mechanism for bureaucrats in former communist countries to exploit regulations and gain illicitly from the privatization process. Combined with the rapid expansion of offshore financial centers within the global banking system, as revealed by the International Consortium of Investigative Journalists’ report Secrecy for Sale, the Panama Papers, the Paradise Papers and the FinCEN Files the ease of moving money internationally has made the fight against corruption very difficult. Many secrecy jurisdictions, or tax havens, market opaqueness and promote little to no cooperation with outside investigative entities. Available research indicates that deposits in tax heavens amount of USD $12 trillion globally, which is 14 percent of the global gross domestic product.

As stated in the White House memorandum, the costs of corruption are staggering—but corruption takes a much heavier toll in poor countries and drives instability, migration, and conflict. The World Economic Forum calculates that the global cost of corruption is at least USD 2.6 trillion, or 5 percent of the global GDP and according to the World Bank, businesses and individuals pay more than $1 trillion in bribes every year.

Any anti-corruption strategy must focus on where the source of the money. Wealth and power are the main objectives of corruption. Corrupt governments seek to capture a country’s revenue streams for the personal profit of corrupt elites. Identifying and assessing revenue streams is crucial for a comprehensive fight against corruption. While the streams of illicit profits vary from country to country, the ultimate impact remains the same.

While no country is immune from corruption, there are countries that do well in countering corruption. The similarities among the countries that trend towards being less corrupt, all share commonalities. Higher degrees of societal and corporate values, stronger rule of law, good governance, and strong institutions. Countries that fare poorly are characteristically weak in the above. Countries with weak judiciaries, weak rule of law, and weak institutions become the preferred playground for the corrupt. When corrupt leaders and oligarchs are able to amass massive amounts of unexplained wealth without any transparency or due process for accountability, the host country pays the price because the population suffers from the consequences of reduced government revenues and services. Too often the expression “crime and corruption” is bantered about as if corruption is a lesser practice detached from crime. In reality, the opposite is true in that corruption is the substrate that allows and enables the flow of criminal activity.