Libya: A Country Up for Grabs? 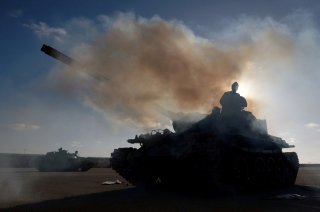 Libya has become the site of a proxy war between Russia and Turkey. The UN-backed Government of National Accord (GNA), which Turkey, Italy, and Qatar support, fights with the rebel forces of commander Khalifa Haftar, assisted by Russia, France, Egypt, Saudi Arabia, and the United Arab Emirates (UAE). What is missing in the Libyan crisis is the United States and its traditional leadership role.

These foreign states pursue a variety of goals in Libya. While France, Turkey, and Italy are interested in the oil, Saudi Arabia and the UAE worry about Turkey becoming a regional hegemon. Other European Union (EU) countries are concerned about the humanitarian consequences of the civil war and the growing number of migrants passing through Libya’s miserable refugee camps. Russia is taking advantage of the turmoil to expand its influence in the Middle East and North Africa (MENA). Moscow seeks to install a pro-Russian government in Libya, which would allow it to establish a military foothold in North Africa. The United States, under the Trump administration, has remained absent from the region for multiple reasons. Key among them is President Donald Trump’s antipathy to U.S. involvement in humanitarian crises, along with his deep-seated desire to reverse President Barack Obama’s policies. The lack of American engagement stemming from the isolationist America First doctrine has provided space for Turkey and Russia to advance their strategic interests in Libya.

Moscow’s intrusion in Libya is part of its updated strategy toward the MENA region. For decades, the Soviets were Libya’s staunchest allies. Russian-Libyan relations improved significantly in 2008 when Moscow intensified its cooperation with dictator Muammar el-Qaddafi by renegotiating the Soviet debt, concluding arms deals, and getting large infrastructure contracts. For instance, the Russian Railway Company won a $4.5 billion contract to build a high-speed railway connecting Benghazi and Sirte, a project interrupted by the Revolution. However, despite Russia’s affable relations with Qaddafi, during the Arab Spring, then-president Dmitry Medvedev condemned the dictator and, surprisingly, did not veto the United Nations Security Council resolution 1973 on Libya, thus paving the way for his removal by the NATO-led coalition.

Russia’s MENA policy became increasingly audacious with the progression of the Syrian civil war and the rise of the Islamic State. By 2013, Russia was already defining the Mediterranean Sea as an area of strategic importance. It even began launching airstrikes against the Islamic State from the Caspian Sea and the Mediterranean, sending equipment, warplanes, and mercenaries to back the Assad regime. Subsequently, Moscow set up a second military base in Syria, at Khmeimim, thus transforming the country into an operational hub, suitable for initiating future operations in the MENA region. While Washington remained on the sidelines, Moscow projected its influence from Syria farther into Libya. In exchange for military assistance, Haftar might offer Moscow access to basing rights, and long-term arms contracts.

The centerpiece of Moscow’s new MENA strategy is the covert involvement in the region’s civil wars. According to recent Pentagon and UN reports, Russia increased its military presence and logistical support for the pro-Russian elements in Libya. Unlike Turkey’s open support for the government in Tripoli, Moscow’s secretive operational approach relies on the Russian paramilitary mercenaries known as the Wagner group. Roughly two thousand private contractors from Wagner took part in Haftar’s failed offensive against the UN-backed GNA. The defeat forced the Wagner group to begin recruiting Syrians to fight in Libya, as part of Russia’s hybrid strategy.

Such covert activities advance Moscow’s interests globally while maintaining plausible deniability, where it claims that its armed forces do not operate in the region or that the mercenaries act independently of the Russian state. Such strategic gaslighting allows Putin to minimize the risk of additional sanctions while acting as a biased mediator in MENA’s conflicts.

For peace to prevail in Libya, a clear American strategy of engagement is imperative. The Trump administration lacks a view of America’s role in the region. Hence it has adopted a short-term transactional approach to international affairs, demonstrating its unwillingness to resolve the crisis. The next administration has two imperfect options. First, the United States could pressure all the actors involved to commit to a peaceful resolution of the conflict. To reach a settlement, all the parties to the conflict, including the intervening states, would need to refrain from pursuing their narrow economic and strategic goals and adhere to the principles of the Berlin declaration, which should serve as a roadmap for peace.

The second option involves the United States taking sides, potentially leading to another Middle Eastern entanglement. Additionally, support for the UN-backed GNA provides an opportunity for the U.S. and NATO allies to mend ties with Ankara and drive a wedge between Turkey and Russia. There is a limited domestic appetite for this policy option. Still, inaction in Libya can result in a major humanitarian catastrophe and the growing danger of terrorist threats damaging U.S. interests in the area. In the worst-case scenario, a protracted Turkish-Russian proxy war would leave Libya divided into two or more parastates (i.e. de facto states).

Therefore, America’s future strategy in Libya must integrate important lessons learned from its forgotten history of successful conflict mediation. Although it seems counterintuitive, the United States has contributed to peace in several disputes. It played a central role in negotiating the Treaty of Portsmouth (1905) between Russia and Japan; the Dayton Accords (1995) ending the Bosnian War; the Good Friday Agreement (1998) in Northern Ireland, and the Comprehensive Peace Agreement in Sudan (2005). Building on the past success of American mediation efforts, the next administration needs to achieve its foreign policy objectives by initiating and stepping up its mediation efforts before it is too late.

Farah N. Jan, Ph.D, is an international relations lecturer at the University of Pennsylvania. (@fjan1)