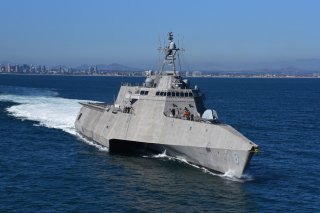 In the movie business, sequels rarely outperform the original. Hollywood is not the only industry to invest in failure. The Navy and Marine Corps are attempting to prove their critics wrong by promoting a sequel to the failed Littoral Combat Ship (LCS): the Light Amphibious Warship (LAW).

The Navy has initiated a new ship procurement program to support the Marine Corps Force Design 2030 and the supporting operational concepts of Expeditionary Advanced Base Operations (EABO) and Stand-in Forces. The LAW will transport and sustain small, specially configured Marine units to operate as Stand-in-Forces with the mission to seize, secure, and control contested key maritime terrain and conduct sea denial operations in support of the fleet.

The LAW program is in its early stages; no ships have been built and a final design has yet to be selected. The Marine Corps’ priority is to aggressively move ahead with procurement even before ship numbers and key design and system upgrade issues are settled with the Navy.

A similar situation existed at the beginning of the LCS program. The ship was meant to be an inexpensive, lightly armed, multi-role warship. Ship construction began even before the first prototypes of the various mission modules were available for testing. After twenty years of design failures, delays, and cost overruns, the cost per ship increased from an initial cap of $220 million to nearly $500 million. A Government Accountability Office (GAO) report from February 2022 noted that “Operational testing has found several significant challenges, including the ship’s ability to defend itself if attacked and failure rates of mission-essential equipment.” Of the fifty-plus ships initially planned, the Navy has elected to terminate the program at thirty-five ships. Some will be retired long before they reach their service life. The bottom line is that the GAO found that the LCS fleet has not demonstrated the operational capabilities it needs to perform its mission. Neither the Navy nor the Marine Corps can afford to make the same mistake with the LAW.

But is the LAW following a similar path?

Just as the Navy did for the LCS, the Marine Corps is asking Congress to appropriate funds to build the LAW even before the ship design is complete and the operational concepts have been fully tested and analyzed. The Marine Corps (which is not known for its ship-building expertise) initially projected the cost of each ship at $100 million. However, the Navy requested $247 million in its fiscal year (FY) 2023 budget submission to build the initial ship and projects that subsequent ships will cost less. Ship survivability and speed will be the major cost drivers, and unless “requirements creep” for this vessel is kept under control, the price will skyrocket as happened with the LCS.

Force Design 2030, Expeditionary Advanced Base Operations, and Stand-in Forces are unproven experimental concepts that do not lack critics. For example, the Congressional Research Service (CRS) recommended Congress conduct a closer examination of Force Design 2030 and EABO and identified the following issues in an August 2022 report:

- whether Force Design 2030 and the EABO concept are focused too exclusively on potential conflict scenarios with China at the expense of other kinds of potential Marine Corps missions;

- the ability of Marine forces to gain access to the islands from which they would operate;

- the ability to resupply Marine forces that are operating on the islands;

- the survivability of Marine forces on the islands and in surrounding waters;

- how much of a contribution the envisioned operations by Marine forces would make in contributing to overall U.S. sea-denial operations and;

- potential alternative ways of using the funding and personnel that would be needed to implement the EABO concept.

Perhaps the most striking similarity between the LAW and the LCS is the lack of protection for the embarked marines and sailors to survive a missile attack. The Navy, based on their experience with the LCS, may balk at necessary survivability upgrades by arguing that they are too expensive and impractical. In today’s missile age, ships can no longer get by with the same kind of survivability standards that have been in existence since the middle of the Cold War. This creates a critical dilemma: if the ship is survivable, it is too expensive but if the ship is not survivable, it is not usable. And if it is not usable, the marines on those small islands are not sustainable.

During good economic times, the Department of Defense can endure a few “lemons” and “white elephants” without subjecting itself to congressional accountability. It took twenty years to acknowledge the LCS program consumed billions of precious defense dollars and prevented the construction of ships that were truly needed to maintain the United States’ position as the world’s preeminent maritime power. The lessons of the LCS have been well documented by the GAO, CRS, and others but was anything truly learned? The ongoing joint Navy-Marine Corps program to field a LAW using an abbreviated design and procurement schedule could also end in failure. Congress must assert itself and demand accountability for the LAW program to avoid another bad sequel to a bad movie.

Colonel (USMC) Stephen Baird is a career artillery officer. He has extensive artillery and operational level experience including command of a direct support artillery battalion, Assistant Chief of Staff G-5 Plans for I MEF, Chief of Staff 1st Marine Division, and Chief of Staff for Marine Forces Central Command during Operations OIF and OEF.

Captain (USN) Carl O. Schuster is a career naval officer who served on a variety of US and allied warships before transferring to intelligence at mid-career. He has extensive experience as a planner at the amphibious group to theater command level and finished his career as the director of operations at then US Pacific Command’s Joint Intelligence Center.