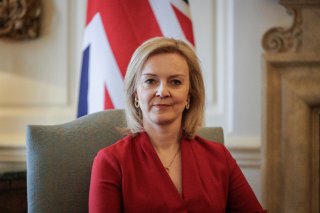 As the campaign to win the leadership of the British Conservative Party moves on, momentum is building behind Liz Truss. Consistently ahead in Conservative membership polls and regularly racking up big-name endorsements, Truss may well already be thinking beyond the leadership campaign to the challenges of being prime minister.

Yet, one challenge stands above all others in importance: finding a solution to the problems that have plagued Northern Ireland in recent years.

The power-sharing agreements between unionists and nationalists in the Northern Ireland Assembly—the fruit of the Belfast Agreement—are in peril.

Ordinary commerce between Northern Ireland and Great Britain has been seriously impeded as part of the Northern Ireland Protocol—a deal between Britain and the European Union (EU) to divide the United Kingdom up into different customs zones to avoid a hard border between the Republic of Ireland and the north.

It has placed onerous customs restrictions between Northern Ireland and the rest of the United Kingdom.

This has put specific industries and their supply chains at risk and is continually on the cusp of breaking down. Meanwhile, and most pressingly for Truss, it has eroded Northern Ireland’s link to Great Britain by placing Northern Irish affairs under the jurisdiction of European courts and subjecting them to a de facto European veto.

This state of affairs is disliked by Westminster and despised by unionists in Northern Ireland who consider this authority fundamentally illegitimate and predicated on a willingness to break up the United Kingdom.

Liz Truss has served as foreign secretary and Britain’s negotiator with the European Union since 2019. She knows that a resolution to the protocol is vital. Without it, a tidy solution to the constitutional hurdles of Brexit cannot be reached and the union between the constituent parts of the United Kingdom will remain in jeopardy.

The next prime minister must be prepared to reach a new and more permanent solution to this impasse.

The United Kingdom has been engaging with the EU on this precise point for a long time. Article 16 of the protocol allows for its termination if one party declares it has completely failed. For Britain’s part, the protocol has long been considered a failure.

If Truss is installed in 10 Downing Street in early September, she will need foreign policy victories close at hand to show for it. She will need to show that she has got the Brexit issue under control.

This is a challenge, but like many challenges, it is also an opportunity.

Truss has said to her supporters, and seemed to indicate in her actions and promises, that she is willing to complete this last hurdle of the Brexit issue.

Truss is lucky in some ways. Her party has shown a willingness to work with all parties in Northern Ireland, and in the Republic, to reach compromises that moved the process forward before. And it has within its ranks enough ministerial talent to find new solutions that will maintain the peace and prosperity all parties wish to see in Northern Ireland.

I have worked and written extensively on the future of Northern Ireland and have seen this first hand. Conor Burns, minister of state for Northern Ireland, has impressed—and impressed upon others the UK government’s continuing good faith. If Truss wished to secure rapid and positive movement on the protocol, she is lucky to have ministers like this ready to serve in her Cabinet.

At the moment, the protocol stifles commercial exchange and Northern Ireland’s parties seem unwilling to compromise. The cross-sectarian power-sharing provision, a central tenet of the Good Friday Agreement, is under stress. These issues cannot be ducked and they will confront the next occupant of 10 Downing Street the second they cross the threshold.

But this is all solvable. It Is a problem to which hard work, the ability to compromise, and the capacity to advance new lines of negotiation can be applied effectively. Liz Truss has negotiated with the EU before and knows how it is done. If she is soon elected as prime minister, she must approach Northern Ireland with confident determination, knowing that finding solutions where her predecessors did not would be a profound statement of the possibilities of her premiership.