Moral Crusades Can Only Lead Britain Towards Isolation 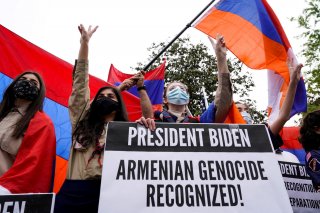 “The best vehicle for promoting stability in the twenty-first century is a global concert of major powers,” Richard Haass, the president of the Council on Foreign Relations wrote in a new essay, which was published by Foreign Affairs. Concerts had “two characteristics that make them well suited to the emerging global landscape: political inclusivity and procedural informality,” according to Haass. This is beneficial as they largely separate “ideological differences over domestic governance from matters of international cooperation,” as well as eschew formality and are therefore more flexible and non-binding, he noted. In crude terms, concerts are old school, wherein heads of states and their peers get together to hash out mutually beneficial deals while charting global prosperity, and non-interference in internal affairs. Multilateralism and non-governmental organization politics, out . . . great powers in a smoke-filled room, in.

Jolly good. That’s how things are supposed to be anyway, and always were, except for the brief flickering moment of unipolarity, which never was meant to last and has now duly passed. The actors change, but the game always remains the same, and to bet on China being a liberal great power with aligned interests or on the inertia of Russia, a historic empire, to be always subservient, was a bafflingly utopian idea to start with. A new concert would bring back non-interference in both sovereignty and spheres of influences and will establish a new equilibrium that can then focus on shared interests and common advancements in science while keeping both extreme revolutionary and reactionary forces at bay.

The only issue Haass perhaps did not anticipate in this otherwise astute advice of realpolitik is that, historically, a concert is only possible when either there are no revolutionary states, or the revolutionary state is suppressed by others in a balancing coalition. After the final defeat of Napoleon Bonaparte, France was only allowed in the concert of Europe after it was essentially neutered. The system worked decently well, until new revolutionary forces changed the dynamic in Europe, and completely collapsed when a whole new power was given birth to, right in the middle of the continent, that was so massive that it changed the center of gravity and equilibrium permanently, the effects of which the continent is still seeing today. This time, however, the problem is that the ostensible global anchor of this new concert, the United States, is itself now a revolutionary power.

Within days of Haass’ sage advice, President Joe Biden became the first U.S. president to recognize century-old atrocities against Armenians by the Ottoman Empire in modern-day Turkey as a genocide. Just what grand-strategic purpose this is supposed to serve is hitherto incomprehensible. Modern Turkey is, of course, not the Ottoman empire, and even when ruled by an increasingly authoritarian president, Recep Tayyip Erdogan is still duly elected, and Turkey is still technically a treaty ally under NATO. This is practically similar to Russia or Turkey declaring a random day to mark the genocide of native Americans. It is at the end of the day a meaningless gesture with no practical effect other than cheesing off the population of a major power—the second-largest NATO army, and the second-largest naval power after Russia in the Black Sea—in a geopolitically fluid region. It will also have unintended consequences and will come back to haunt Washington. The predominant great power of the planet, which cannot restore order in her three major cities, whose diplomats go to the United Nations to genuflect about their systemic racism, and whose streets are filled with a bunch of racially aggrieved people rioting at any given opportunity, should be careful about rhetorically imitating undergrad sociology students.

This is also increasingly posing a challenge for American allies. Is Britain willing to take up every moral crusade that the American liberal ruling class determines worthy of re-litigating after hundreds of years? Will Britain, for example, follow America in declaring genocides, only for the gun to inevitably turn to her, by some former colony? The post-Brexit United Kingdom has an increasingly difficult balance to maintain: trying to re-strengthen the Anglosphere and CANZUK (Canada, Australia, New Zealand, the United Kingdom) trade alliances; to have a decent relationship with a new power in the European Union, itself suffering from centrifugal forces; to pivot to Indo-Pacific; and have a good relationship with an India smarting from Western indifference during the coronavirus pandemic, as well as cater to the erratic whims of a United States ostensibly governed by sophomores with no sense of historical moderation or prudence and seething with righteous crusading zeal. To complicate matters further, Britain has historically warm relations with Turkey, regarded as the second-most pro-Istanbul great power in Europe, after Germany.

A concert of major powers stems from the assessment that the balance of power refuses the imposition of moral values by any single actor, and instead, constrain every actor to look for a compromise, while not being too overtly evangelical. One should care less about what smaller powers think, and more about equilibrium between major powers. Unnecessary moral preening wrecks that equilibrium. The collapse of the Soviet Union, however, led to a liberal hegemony, where political conflicts were not anymore defined by interests but by values, which naturally do not allow for compromises. One can never obviously negotiate with something that is considered evil; one can only act to eradicate it. One does not sanction Adolf Hitler, so to speak, nor does one cooperate with a power that has been historically genocidal. The consequence of this is looking at global politics through the lens of morality, which then results in a growing backlash from emerging powers and geopolitical competition and conflict without achievable goals under lofty ideals. It doesn’t take a genius to see how that ended in Afghanistan, and the greater Middle East, during and after the Arab Spring, as well as in Georgia and Ukraine.

The problem with a new concert is that America is increasingly a revolutionary power and is heading to a path of isolation. France is increasingly opposed to Critical Race Theory enabled racial nonsense. Russia and China are already rival great powers, and never lose an opportunity to highlight what they term as degeneracy and self-loathing in the West. Central European powers are enacting every possible legislation to slow or stop the spread of sexually liberal movements stemming from America. Even Britain, the one power most culturally similar to the United States, is enacting laws to crack down on left-wing activism at universities and left-wing violence modeled on the United States, on the streets. “Realism maintains that universal moral principles cannot be applied to the actions of states in their abstract universal formulation, but that they must be filtered through the concrete circumstances of time and place,” as Hans Morgenthau once wrote. One can hope that American policymakers will realize that moral imperialism will only lead to further isolation and loss of allies, but whether and when that realization will dawn is a matter of debate. In that light, London should be careful not to jeopardize relations with others, blindly following Washington as a junior partner.