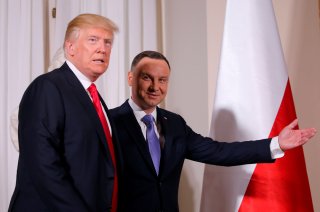 Although most people still haven’t heard of it, the Three Seas Initiative (3SI) is the most significant political and economic policy initiative to emerge in Central and Eastern Europe since the enlargements of the EU and NATO.

The 3SI covers twelve countries around and between the Baltic, Black, and Adriatic seas: Austria, Bulgaria, Croatia, the Czech Republic, Estonia, Hungary, Latvia, Lithuania, Poland, Romania, Slovakia, and Slovenia. It is designed to promote connectivity among nations in Central and Eastern Europe by supporting infrastructure, energy, and digital interconnectivity projects, with the ultimate goal of strengthening their security and integration with the rest of Europe.

Participant countries have already agreed to no fewer than forty-eight priority interconnection projects, from liquified natural gas (LNG) terminals in Świnoujście, Poland, and Klaipėda, Lithuania, to new north-to-south highway connections, new and existing rail lines between countries in the region, a water corridor between the Danube, Oder, and Elbe rivers, as well as various digital and telecommunications projects.

The key idea of the 3SI is to break the decades-long legacy of the post–World War II era in Central and Eastern Europe, when the entire region’s infrastructure development was tied to Soviet infrastructure, ensuring energy and transportation dependency on Moscow.

The United States, it seems, is paying attention. Back in 2017, President Donald Trump addressed the Warsaw Summit of the 3SI member countries and pledged strong U.S. support for the project. On June 30, 2020, Deputy Secretary of State Stephen E. Biegun renewed that pledge in remarks delivered at the Three Seas Initiative Virtual Ministerial hosted by the government of Estonia. According to a State Department statement, Mr. Biegun “reaffirmed U.S. support for the Three Seas member states’ efforts to improve North-South energy, transportation, and digital infrastructure.”

The reasons are compelling. As the State Department has noted, “a secure, prosperous, and resilient Three Seas region is key not only to binding the countries of Central and Eastern Europe more closely with the rest of the European Union but also to the United States.”

American support hasn’t stopped there. The United States, through the U.S. International Development Finance Corporation, has committed to investing up to $1 billion in Three Seas Initiative energy projects. These funds will complement financial commitments made by Estonia, Latvia, Hungary, Poland, and Romania to the Three Seas Initiative Investment fund, as well as to already accumulated €2.5 billion by member states for ongoing projects.

But more can still be done. It will be much easier to achieve the goals of the 3SI if it incorporates, or at least closely collaborates with, the countries of the Eastern Partnership. As a recent Heritage Foundation research report pointed out, Washington should “promote the idea of non-EU states joining the initiative.”

The United States and the EU should partner on facilitating the build-up of the Crescent of Economic Cooperation, which will include the countries of the Eastern Partnership: Azerbaijan, Armenia, Georgia, Ukraine, Moldova, and Belarus, and to integrate these countries with the Three Sea Initiative.

This is important to ensure that all countries in Eastern Europe are interconnected. It is also important to maximize previous American and Western investments in energy and infrastructure development, connecting the resource-rich Caspian region with the Black Sea and Eastern Mediterranean, with the aim of successfully implementing the objectives of the Three Seas Initiative.

The U.S. strategic interest in this linkage is clear: to bolster the economic sovereignty of all the countries involved and to enable them to withstand Russia’s efforts to manipulate its smaller neighbors through economic and energy levers. It will also limit China’s growing economic influence in Central and Eastern Europe. These countries have the potential to play a significant role in the upcoming diversification of the global supply chain, including the medical supply chain. Going forward, the United States may have a significant benefit by integrating these countries into its own Economic Prosperity Network too.

Facilitating these practical steps to improve infrastructure development and the formation of the Crescent of Economic Cooperation may be the most cost-effective way for the U.S. to strengthen the security and sovereignty of a large number of allied countries stretched from Central and Eastern Europe all the way to Central Asia.

Mamuka Tsereteli is a Senior Fellow at the American Foreign Policy Council. Anthony B. Kim is the research manager for The Heritage Foundation’s Center for International Trade and Economics and the editor of the Index of Economic Freedom.