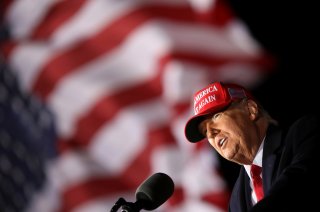 Former Defense Secretary William J. Perry lambasted the policy of presidential sole authority over the nation’s nuclear weapons, saying it was “in complete contrast with the Constitution, which reserved for Congress the right to declare war.”

The issue of nuclear control was back in the news after President Donald Trump’s bout with the coronavirus in early October, during which time he was taken to Walter Reed Medical Center and given a variety of treatments, including an experimental drug cocktail and a steroid with mood-altering side effects.

Despite this, Trump did not relinquish control over the nation’s nuclear arsenal throughout the episode. This raised eyebrows in the national security community, where many thought the president should temporarily delegate nuclear authority to the vice president, as other chief executives have done in the past.

“To state the obvious, we should not entrust nuclear launch authority to someone who is not fully lucid,” Ploughshares Fund’s Tom Collina wrote in an op-ed published by the Bulletin of Atomic Scientists. “A nuclear crisis can happen at any time, including at the worst possible time. If such a crisis takes place when a president’s thinking is compromised for any reason, the results could be catastrophic.”

Collina and Perry argued that the reason we still tolerate sole authority anyway has to do with two sweeping myths about the nuclear weapons system.

“The first myth is the reason we have sole authority and can’t possibly get away from it is because we need the president to make a decision about nuclear launch within minutes,” Collina explained on a recent episode of Press the Button. This line of thinking argues that the speed and accuracy of adversary intercontinental ballistic missiles require that U.S. missiles immediately get airborne, otherwise they risk being destroyed in the ground.

But according to Collina, this logic falls apart when you play it out. “Let’s say that there is an alert that hundreds of nuclear weapons are coming in,” he said. “There are two options, that’s it’s a false alarm or it’s real. If it’s a false alarm, the last thing you want to do is launch quickly, because then the United States has just started a nuclear war.”

“If it’s real, our launching quickly will not stop that attack.” But neither will that attack prevent a devastating US counterstrike. In any conceivable scenario, the American fleet of nuclear submarines would still be at large, ready to launch a massive retaliatory blow hours or even days later. In other words, we simply would not need the president to make a frantic decision on the spot.

The second myth surrounds a “very persistent misunderstanding that the military brass can step in and stop” a nuclear launch order from an unhinged president. This gets the danger fundamentally wrong, said Perry and Collina. “People tend to think about a president in the middle of the day, with no international crisis, just deciding to launch the nukes,” the latter explained. “That’s not a very realistic scenario.”

“The scenario we’re most worried about is there is an alert that we’re under attack, so we have a time crunch scenario,” said Collina. “And in that kind of situation it’s very unlikely that, if the president were to decide to launch, the military brass would try and slow that process down.”

It also intrinsically misunderstands the relationship between the military and the president, argued the former defense secretary—even in a non-crisis scenario. “The military stepping in is a highly unlikely scenario,” said Perry. The air force officers tasked with actually launching the intercontinental ballistic missiles would be “very unlikely to challenge [the president’s] order.”

“They understand that the president has access to information that they do not have access to, and that’s why he has the authority instead of them,” he continued. “And so, if they think there’s something wrong with his command, the first thing they think is that ‘this is because the president knows something I don’t know.’”

Taken together, said Perry and Collina, the truth behind these myths reveals that there is neither a strategic need for—nor any real safeguard against—presidential sole authority over the nuclear arsenal. This reality should push the public towards common-sense reform.

“We have to ask ourselves, at what point does a president’s inability to think clearly affect his ability to have nuclear authority?” Collina asked. “And more broadly, should the president have that authority at all?”

“Why did we trust, in this case, the future of the world to one person with COVID on heavy medication? Does that make sense?”