Paris Ponders a Path Forward in the Shadow of AUKUS 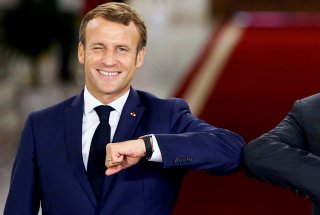 It is interesting to now look back at one particular G7 photo from Cornwall. Emmanuel Macron, Angela Merkel, and Ursula von der Leyen, sitting together at a table, the big boys club as it was dubbed in the British media. The photo was featured in the Financial Times under the headline, EU leaders to pressure Boris Johnson over Northern Ireland at G7. Britain, the country that took realpolitik and divide and rule to an art form, found itself in the ropes, isolated and unwanted in the international community, despite being the host. Or at least that’s how the narrative went.

Consider the two years prior to that. The main British coronavirus vaccine, Oxford-AstraZeneca was trashed in the international market by France and the EU purely for political reasons. Britain was unceremoniously kicked out of the Galileo satellite program. The Royal Air Force was sent to support French counter-terrorism efforts only for France and the EU to then side against London on the Northern Ireland question. The French and British navies squared off in the channel—overfishing. On top of it, France was charting its own hegemonic foreign policy within the EU. It denied and delayed the British-Euro trade deal, undermined NATO, pushed for an EU army and argued for European strategic independence while supporting Greece against Turkey, and charting an independent foreign policy in Libya.

At that time, Britain’s prime minister was allegedly planning out the submarine deal with President Joe Biden and Scott Morrison and practicing an ancient British pastime of pulling the rug from underneath French feet. The French reaction to this new security pact—unimaginatively named AUKUS—has been one of apoplectic fury. Over the past week, France has withdrawn ambassadors from both the United States and Australia, canceled a security summit with the UK after calling Britain a vassal state of America, threatened to start unilateral negotiations with China and Russia, questioned NATO unity, and hinted at withdrawal from NATO. French officials even pushed the other EU states to cancel the EU-Australia trade agreement. Part of the rhetoric was incoherent. If France is a Pacific power (and it is, given its citizens in French Polynesia), then it shouldn’t make much of a difference to France’s overall Pacific strategy. After all, France will have to maintain a strong naval presence for its own interests. Other tantrums are petulant. Given France’s history of unilateralism, and desire for autonomous foreign policy independent of the perfidious Anglais, it is baffling to understand French fury when the consequence of the same unilateralism is demonstrated to them. Unilateralism based on national interest and autonomy are not just buzzwords, and other great powers practice them too.

The whole amusing saga points to three serious developments that are partly tied to the growing Anglosphere realism. First, Australia is embarking on what one can term an action consistent with “internal balancing.” Australia made a simple calculation that in times of stress, the old Anglosphere under the naval and nuclear security umbrella of the United States is a better bet than the French and the rest of the EU—even at the cost of a potential free trade agreement cancellation. This is the purest form of guns versus butter debate. With this nuclear submarine deal and promises of technology transfer to Australia, alongside the retrofitting of Japanese heli-carriers to accommodate F-35 jets, the actual material American balancing of China started in the last week and a half. And Australia chose the big guns.

Britain was the second bar of this triad. If reports are true, then the Australians first approached the British First Sea Lord Adm. Tony Radakin who then formed a group that included John Bew, the special assistant to the PM and the writer of the history of Realpolitik. Overall at any given time, no more than ten individuals, including Johnson, knew of this negotiation. London then reached out to Washington. Given that the British are the only other party to this secretive nuclear submarine propulsion technology, it is understandable that they wouldn’t have wanted Paris involved. The current British interest is to be equidistant from Brussels and Washington, while enhancing the core Anglosphere as a security block and keep the sea trade open as a historic maritime power. Brexit was always a choice between either being one in twenty-seven countries under a massive liberal empire with ever-decreasing authority to make its own laws or being a more respectable and independent power in a smaller group of five kindred nations. In those narrowly defined goals, the Anglosphere seems to be the winner.

Finally, this is another data point that while Biden might be a ridiculously left-wing president when it comes to domestic politics, he is a Cold War-era realist. In fact, he is quite possibly the last mainline Democrat leader who somewhat grasps the realities of amoral power. As Aris Roussinos pointed out,

In Joe Biden’s keynote speech following the bloody debacle at Kabul airport, the American president presented a sober vision of the country’s new foreign policy realities that both liberals and conservatives seem loath to accept: that the age of remoulding the world in America’s image is over; that bloody and failing land wars in the depths of Asia were a luxury America could no longer afford; and that all along, the creeping, ever-expanding and ever-costlier mission had been a gigantic trap. As Biden observed, entirely correctly, “there’s nothing China or Russia would rather have, would want more in this competition than the United States to be bogged down another decade in Afghanistan”. Instead, he asserted, “this decision about Afghanistan is not just about Afghanistan. It’s about ending an era of major military operations to remake other countries.

That was the first notch. Secretary of State Antony Blinken earlier accommodated Germany over Nord Stream 2, without consulting Poland. The same thing happened with France, almost so perfectly that a cynic wonders whether the humiliation was deliberate and intended as a show of force. During the early years of the administration, Berlin and Paris side-tracked Washington to rush through the trade agreement with China. In geopolitics, grudges remain. This submarine deal is a shot across the EU bow. Next time, if they fail to veto the ambitions of Berlin and Paris, the EU states would simply be abandoned as America returns to a cold war form. This is especially a hint to the central and eastern states.

Unfortunately, Paris has now cornered itself with this overreaction. The silence from the rest of the Euro capitals demonstrates that no one wants to side with France in an escalating problem with the core Anglosphere. Ultimately, it is a demonstration of European impotence. Bandwagoning is only feasible when a great power with nuclear weapons is willing and capable to provide security to the rest of the continent, and for good or bad, there’s only one great power that can do that—and that isn’t France.