The Plight of the Palestinians 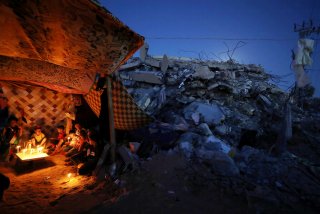 Last week the Irish parliament passed a resolution, with support of all major parties, that condemns the “de facto annexation” of Palestinian land by Israel. This makes Ireland the first member of the European Union to take such a frank and forthright stand about conditions in the Israeli-occupied Palestinian territories. That Ireland should be ahead of its European brethren in this respect is not because the Irish are inherently more perspicacious about such things than others are. And this move doesn’t just reflect a broader progressive trend in Irish politics and society that has enabled Ireland to shake off traditional attitudes linked to the Catholic church, even on abortion, and to elect as one of its recent prime ministers a gay man of half-Indian extraction.

The Irish stand on Israel and Palestine has been politically possible partly because the Irish see parallels between their own history and the plight of the Palestinians. The parallels run from the Normans’ partial conquest of Ireland in the twelfth century, through more complete conquests by the Tudors, to abolition of the Irish parliament and incorporation of Ireland into the United Kingdom in 1801. The Irish see this history as a story, similar to that of the Palestinians, of subjugation and annexation by a more powerful neighbor. And they see relief having come in the form of a two-state solution, with the establishment of the Irish Free State in 1922.

The postures that other European states have taken toward Israel and its conflict with the Palestinians have been colored by their own national histories, which in the case of former colonial powers such as Britain and France have naturally conditioned an outlook different from that of the Irish. Continental European outlooks also have been shaped by a history of persecution of Jews. For obvious reasons, this is most conspicuously the case with Germany, which has enshrined support for Israel as a foreign policy priority. This reaction to history entails an unfortunate conflation, which has polluted discourse on both sides of the Atlantic, of the status of Jews with the State of Israel and with Israeli policies. The most appropriate redemption for the sordid chapter of German history that is involved would be not something imposed on the Middle East but rather a reestablishment of the vibrant German Jewish life that the Nazis destroyed. But in any event, Germany and to varying degrees other European nations are further examples of how one’s own national experience can color attitudes toward a faraway conflict.

The extraordinary U.S. support for Israel is overdetermined—it is the combined effect of several different influences. There has been genuine admiration since the establishment of Israel for what Americans have regarded as a plucky little nation that has accomplished much in technology, entrepreneurship, and other endeavors. Americans also have perceived shared values with Israel, as in the “only democracy in the Middle East” catchphrase that habitually gets applied to it. Added to that is a cultural identification with the European background of most of the early Zionists, in contrast to a relative lack of identification with Arabs and Persians of the Middle East. And during the Cold War, Israel was perceived as an “ally” in opposing Soviet inroads in the region.

Religious identification also is a factor, given that by most counts the United States has the largest Jewish population in the world. This factor has lessened as many American Jews, predominantly progressive in most respects, have become disillusioned with Israeli policies toward the Palestinians. But a religious connection lives on in the form of disproportionate support for Israel among Evangelical Christians, for whom the religious connection is rooted in dogma, which has become most strongly established in the United States, about Israel’s supposed role in the Second Coming of Christ.

Raw political power clearly has been a major factor in shaping U.S. attitudes toward Israel, in the form of a lobby whose clout is rivaled only by that of the gun lobby. The fear among politicians about the consequences for them of antagonizing the lobby leads to unquestioning support for Israeli policies, which in turn influences larger public perceptions and attitudes.

Each of these factors may have effects that outlast the conditions that gave rise to them in the first place. And the conditions have indeed changed. Israel is no longer a plucky and vulnerable little nation but instead the dominant military power in the Middle East, which has thrown its military weight around more than any other regional state. It no longer can be considered a democracy when it withholds political rights from most residents of the territory that it now has controlled for more than half-century and that it treats for most purposes as an integral part of Israel. (Currently, the most democratic country in the greater Middle East is Tunisia.) Any support Israel gave U.S. foreign policy during the Cold War is overshadowed in the post-Cold War era by its sabotaging of U.S. foreign policy. Even the fear of politicians about irritating a lobby may outpace the damage the lobby is still capable of inflicting on their careers.

In addition to all the influences mentioned above—and as a counterpart to the Irish seeing parallels between their own experience and that of the Palestinians—Americans have seen parallels between their own historical experience and that of Israel. Both nations are nations of immigrants, some of whom fled religious persecution. Both see themselves as on a civilizing mission that executes divine will—Israelis as the Chosen People and Americans as the bearers of Manifest Destiny. American settlers populated the Western frontier; Israeli settlers have populated the West Bank.

Such parallels have long been part of the American consciousness, even when the Israelites being compared to were those of the Old Testament rather than those of the modern Middle East. The Pilgrims and Puritans thought of their settlements in what would become Massachusetts as the “new Israel.” Until 1787, undergraduates at Harvard were required to study Hebrew.

The attitude-shaping parallels have led many Americans to think that everything about Israel—including its treatment of conquered territory and the residents of that territory—should be seen in the same benevolent light in which most Americans view their own history of expansion. That the natives of North America were easily marginalized—and that the injustices involved are today not a politically significant issue—promotes similar thinking about the natives of Palestine, even though their numbers relative to those of the conquerors are much greater. Former Republican Senator Rick Santorum exemplified such attitudes when he declared that Israel’s retention of the land it seized in the 1967 war was comparable to the U.S. retention of Texas and other southwestern lands that were part of the settlement ending the Mexican War and that Americans should accept and support the former just as much as they do the latter.

Getting Back to Interests

None of these attitudinal ingredients—including how sentiments toward another nation are shaped by the historical experiences of one’s own nation—makes for sound foreign policy. This is true not just of policy toward Israel, and not just of the policy of the United States. Ireland is right about the Israeli-Palestinian conflict despite, not because of, Irish perceptions being colored by distinctively Irish experiences. The United States has been wrong about the same conflict partly because of how distinctively American experiences color American perceptions.

Sound foreign policy requires stripping away the perception-slanting histories, the other emotive biases, the religious dogma, and the domestic political fears. With those stripped away, the U.S. “special relationship” with Israel, and what it has done to U.S. policy toward Israel’s conflict with the Palestinians, is revealed to be profoundly damaging to U.S. interests. It has been so in multiple ways, including a loss of credibility in addressing democracy and human rights, a stimulation of anti-U.S. terrorism, and a constraining and corrupting of U.S. policy toward other matters in the Middle East. Any benefits to the United States from relations with Israel can be realized through a bilateral relationship that is normal and healthy, not a “special” one that involves a turning of blind eyes and writing of blank checks.

And those who admire and love Israel, for historical or any other reasons, should realize that the U.S. condoning of decades-long policies of occupation and subjugation does Israel no favors. As the latest round of fighting ought to remind people, an indefinite continuation of the condoning and the policies it has permitted means Israel will always live by the sword and will never enjoy true peace.