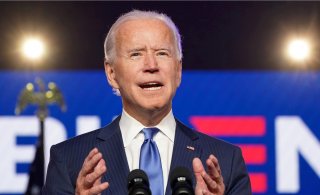 Despite creating the U.S. Space Force and Operation Warp Speed, the Trump administration failed to back U.S. expertise, so millions of Americans suffered as a result of the administration’s shortcomings. President-elect Joe Biden can reverse this with a bold new initiative to build U.S. know-how and skills for the twenty-first century. As John F. Kennedy mobilized all Americans for the space age, Joe Biden can call on all of us to create a knowledge society.

The groundwork has been laid. The key is that America’s response to the pandemic must be larger than this particular scourge.

Biden’s campaign elevated science to combat the global pandemic overwhelming the country. His first post-election act established a Covid-19 Advisory Board to contain America’s worst health crisis and humanitarian disaster. Appointing a trio of renowned co-chairs and diverse experts, the president-elect signaled that the day when people’s lives are secondary to personal ego and political gain will soon end.

Even great experts cannot make the coronavirus vanish overnight. Beyond therapeutics and vaccines, the logistics of inoculating a large population, many of whom could fall prey to anti-vaxxer misinformation, remains a challenge. Rallying former presidents to demonstrate that the vaccine is safe will help fill the vacuum of scientific leadership under outgoing President Donald Trump. But inoculating the public against anti-science attitudes is even more important than delivering the shots.

Beyond America’s shores, it now looks like an ignorant superpower, which is a perception that must be changed. Some of America’s closest allies think it unexceptional because of the mishandling of the coronavirus crisis. After combating the virus, a presidency dedicated to knowledge can move on to other policy priorities, including climate change, major-power competition, and combating tomorrow’s terrorism. By stating his intention to rejoin the Paris agreement on climate change and the World Health Organization, Biden declares U.S. support for both science and international engagement. Globalism is not an unalloyed good, but in an age of global problems, the United States ignores the world at its peril.

Re-engaging with allies and international institutions will allow America to regain its stature in the world. By working with other democracies, Biden can ensure that America’s values are baked into emerging standards and the regulatory scaffolding around privacy and data collection. Digital technology should advance freedom of thought rather than suffocate it by enabling the rise of oppressive surveillance states.

Resurgent great-power competition gravitates around technology. Biden’s advisers understand that the U.S.-China relationship is too crucial for America to allow it to fail. Thus, it must wage “competition without catastrophe.” Yet, Biden must not concede technological dominance to Beijing, which seeks to lead on 5G telecommunications, artificial intelligence, quantum computing, and other high-tech frontiers. Fortunately, outstanding bipartisan studies and proposed legislation offer blueprints, including the National Security Commission on Artificial Intelligence; the Endless Frontier Act to enhance basic research and technology; and the Cyberspace Solarium Commission. The Biden administration can stabilize relations with China while competing in science and technology (S&T).

S&T will also play a prominent role in U.S. defense modernization by building a small, smart, and affordable force. The Biden administration’s defense team needs to wisely adopt fourth industrial revolution advancements in autonomy, artificial intelligence, and nanotechnology into the nation’s arsenal. The U.S. military force structure must graduate from and transform our expensive and exquisite twentieth-century systems.

Yet the same technology promising unprecedented breakthroughs poses untold future threats in the hands of irresponsible humans. For example, rapid progress in bioengineering, including CRISPR technology for editing genomes, could yield unintended consequences if unmoored from ethical constraints. America’s woeful response to the pandemic demonstrates that dealing with tomorrow’s bioterror threat must be a national security priority.

Despite Biden’s desire to heal the “soul of the nation,” his goodwill will not expunge U.S. political polarization. Faced with a surging pandemic, a K-shaped economic recession and recovery, a ramshackle infrastructure, a rival like China bent on technological hegemony, and an underperforming education system, Biden can inspire all Americans to respond to the challenge by learning new skills. Broader S&T literacy—covering everything from education to research and development to economic and military modernization—can improve bipartisanship.

To thrive, Americans must replace extreme arguments with pragmatism. The same rifts regarding anti-coronavirus mask-wearing hamper climate change discourse. Climate alarmists who push a green new deal and climate deniers who peddle dangerous myths will not hear each other. Biden can assemble a new political coalition, finding common ground with enough Republicans to invest in science and new technologies to lower emissions and drive a modern economy.

Scientific Literary is Necessary but Insufficient

As First Lady, Dr. Jill Biden will bring personal experience as a professor of English and writing.  She can boost badly needed science, technology, engineering, and mathematics (STEM) education at all levels, with an equal push to study human behavior, regional studies, civics, and ethics. The academy needs better linkages between the sciences and the humanities. Not every American needs to learn how to code or evaluate drug trials, but America does need to rebuild a literate, educated citizenry that can recognize expertise and objective facts.

Congress should get involved.  Just as the 1958 National Defense Education Act catalyzed a generation capable of putting a man on the moon, a similar act is required today. A Knowledge Society National Security Act could open opportunities for all Americans to learn the hard and soft skills critical to confronting human problems, ranging from disease and global warming to countering disinformation and the malign uses of emerging technologies.

Building Back Better with Knowledge

In his inaugural address on January 20, Biden might echo sentiments of Kennedy, who sixty years ago advocated civility and summoned Americans to reach for a New Frontier. “Let both sides seek to invoke the wonders of science instead of its terrors,” he said. “Together let us explore the stars, conquer the deserts, eradicate disease, tap the ocean depths, and encourage the arts and commerce.”

In a similar vein, Biden can bridge our fractured polity and inspire all Americans to stretch toward the future. Francis Bacon is credited with the phrase “knowledge is power” (scientia potentia est). For Biden, power is knowledge, and presidential power can propel a dynamic new American knowledge society.

Dr. Audrey Kurth Cronin is Professor of International Security and founding director of the Center for Security, Innovation, and New Technology at American University's School of International Service; her book, Power to the People: How Open Technological Innovation is Arming Tomorrow’s Terrorists earned the 2019/2020 Neave Book Prize.