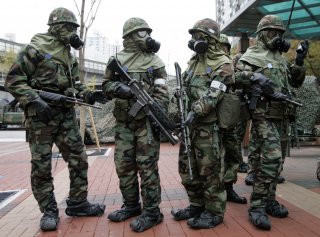 Nuclear power plant construction has increasingly become a lost art in much of the developed world—in contrast to other power generation technologies, the history of nuclear build in the United States and Europe suggests that the costs of new nuclear have escalated, in some cases dramatically, over time. Although critics of nuclear energy—typically citing safety, security, waste, and economic concerns—may celebrate such trends, nuclear power technology is far from fading into oblivion. Instead, the locus of civil nuclear manufacturing and commerce is progressively shifting towards the United States’ geopolitical rivals, more specifically, state-owned vendors in Russia and China. Given considerable support for nuclear among prominent climate scientists—many arguing that large-scale nuclear capacity additions will be necessary to practically achieve climate mitigation objectives—such global market developments have prompted heightened unease within Washington, especially considering the Biden administration’s bold climate change policies.

At this stage, the United States’ principal response to these challenges has been to support and nurture an emerging generation of innovators developing a range of reactor concepts that differ, sometimes considerably, from the conventional large light-water reactors that currently comprise the vast majority of the world’s commercial nuclear power fleet. Although the sheer diversity of reactors being considered and developed makes simple generalization difficult, the designs that are presently categorized as “advanced nuclear” tend to feature enhanced safety and flexibility in deployment, operation, and application. Some types also address traditional objections to nuclear energy through more sustainable waste profiles and increased proliferation resistance and safeguardability. Moreover, certain advanced reactors have improved capabilities in powering energy storage systems and integrating closely with renewables and other clean energy assets.

From the viewpoint of economic and export competitiveness, perhaps the most notable theme of U.S. advanced nuclear innovation has been an appreciable emphasis on smaller (in both size and output) reactors that can be built in a factory setting, thereby enabling mass production and cost reductions through repetition.

Benefits of U.S.-Korea Advanced Nuclear Cooperation for the United States

A number of U.S. advanced reactor designs are scheduled to be demonstrated—largely through the U.S. Department of Energy’s Advanced Reactor Demonstration Program (ARDP)—and are therefore poised to move beyond the conceptual phase to detailed design and construction in the next few years. This is a major sign of progress for the U.S. nuclear industry, and advanced nuclear in particular.

Nevertheless, the time will soon come when these reactors must enter commercial production and market competition. Recent U.S. experiences with nuclear plant construction have yielded lessons about the fragility of supply chains and human resource capital—after a multi-decadal hiatus in nuclear new build, U.S. vendors and engineering firms were ill-prepared for the niceties and rigors of nuclear construction, directly contributing to complications at the Vogtle and V.C. Summer projects. A robust domestic nuclear supply chain will eventually be needed to support the mass manufacture and deployment of U.S. advanced reactors. However, revitalization of the supply chain will almost certainly be a challenging, long-term endeavor.

Despite current public and societal questions about nuclear power, the Republic of Korea (ROK) is one of the few U.S. allies in which nuclear construction continues steadily, at a pace that has remained relatively constant over decades. This consistency has been a central factor in the Korean nuclear industry’s achievements—it has developed a global reputation for completing new build projects on-time and on-budget, underscored by timely construction of the UAE’s Barakah Nuclear Power Station, with its first unit starting commercial operations in April 2021.

The Korean nuclear supply chain—tested, robust, and honed through years of steady and consistent activity—can serve as a vehicle to accelerate progress and commercialization for the U.S. advanced nuclear industry. Pairing Korean manufacturing, engineering, and construction capabilities with U.S. advanced technology would theoretically be a powerful combination. Already, U.S. advanced reactor companies have had keen interest in exploring business and industrial partnerships with Korean nuclear firms, with agreements between NuScale Power and Doosan Heavy Industries and Construction as perhaps the most prominent example.

Lessons learned from Korea’s historical successes with nuclear construction—the importance of fostering standardization, repetition, and economies of learning—are arguably more applicable for smaller reactors, including both light-water small modular reactors  and advanced reactor concepts. If cooperation between U.S. and Korean firms can expedite responses to expected demand for advanced reactors, then the partnerships formed could also reinvigorate the U.S. nuclear supply chain, establishing the foundations for a burgeoning American advanced nuclear sector.

Benefits of U.S.-Korea Advanced Nuclear Cooperation for the Republic of Korea

Given uncertainties in future schedules for nuclear new build in Korea, the Korean nuclear industry has been equally eager to seek external business opportunities, including the development of strategic partnerships with U.S. advanced nuclear firms. Such U.S.-Korea cooperation could be one avenue to preserving and maintaining the nuclear manufacturing and construction capabilities that Korea has painstakingly developed over time.

Should U.S.-Korea collaboration on advanced nuclear bear fruit and lead to successful commercialization of advanced reactors globally, then the characteristics of these systems—including significant improvements in passive safety and the ability to complement and be flexibly deployed with other clean energy sources such as renewables—could help inform societal debates on nuclear energy in Korea and thereby facilitate public reevaluation of nuclear as an energy option.

The personal stories of U.S. advanced nuclear developers and innovators can also provide compelling counter-narratives in the face of historical stigmas associated with nuclear energy technology in Korea. As argued by Ted Nordhaus and Seaver Wang of the Breakthrough Institute, anti-nuclear sentiment in Korea may largely be due to an association between nuclear power and politico-economic models of the past that prioritized economic development over civil liberties. In contrast, many of the key figures and individuals of the U.S. advanced nuclear movement are not government officials or corporate executives, but startup entrepreneurs and philanthropic investors with altruistic motivations, such as addressing global energy poverty and climate change. Thus, the perspectives of these U.S. advanced nuclear pioneers can challenge prevailing perceptions and assumptions about nuclear energy in Korea.

In a sense, current challenges in U.S.-Korea civil nuclear cooperation can be attributable to the lack of opportunities in the global large reactor market and the competitive tensions it produces. While this may very well be an oversimplification of the problem, it highlights the need to consider creative avenues for cooperation that focus on innovation and cutting-edge technologies: advanced fuels and materials, testing facilities, reactor demonstrations, non-electricity and unconventional applications, etc. Such an assessment regarding the present state of this nuclear energy relationship also suggests that the potentially sizeable international markets for advanced reactors in the future may alleviate competitive pressures and foster collaboration, resulting in mutual opportunities and benefits to the industrial bases and economies of both countries.

History has shown that the capacity to manufacture and construct nuclear plants is hard-earned, but easily perishable, particularly if it falls into disuse. Cooperation between U.S. and Korean companies on small modular reactors and advanced reactors can be one means to ensure that developing a high-quality and reliable supply chain for these technologies begins with a degree of momentum, rather than from a standing start.

Ultimately, recognition of the fact that Korea’s nuclear industry—and its many impressive accomplishments—can trace its origins to American largesse provides crucial context for resolving issues and forging a new path forward. Korea’s first nuclear plants were turnkey projects completed by U.S. companies, initiating a gradual process of technological localization that has led to Korea’s present standing as one of the world’s major civil nuclear vendors. If Korea’s world-class nuclear manufacturing and construction capabilities can act as catalysts for a U.S. nuclear energy renaissance—through facilitating the progression of conceptual advanced reactor designs to viable commercial units—then perhaps U.S. generosity has borne fruit and a new course for bilateral cooperation can be charted.

Whatever its recent difficulties, an “ironclad” U.S.-ROK civil nuclear partnership—one in which both countries’ nuclear industries are strengthened through the development of next-generation technology—will be in the best interests of not only the U.S. and Korea, but also the world in its grander struggles against climate change, catastrophe, and illiberalism.

Alan Ahn is the director of programs and communications at the Global America Business Institute (GABI). Opinions and views expressed here are his own and do not necessarily reflect the positions of GABI and its partners and affiliates.