To Resist Russia, Ukraine Must Help Itself 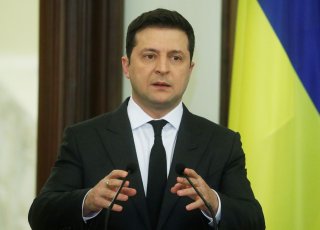 With Russia squeezing Ukraine in a military and energy vice, and NATO sounding the alarm, the government in Kyiv must urgently focus on bolstering its military and energy security. Ukraine certainly needs Western diplomatic and military assistance to stymie Moscow’s invasion plans, but it must also protect itself against the Kremlin’s subversive intent to weaken the state and divide its society through energy shortages and deprivation of transit incomes.

President Vladimir Putin has made it abundantly clear that Moscow does not accept the existence of an independent pro-Western Ukrainian state. He has engineered a proxy war in Ukraine’s Donbas with the aim of legitimizing rebel entities controlled by Moscow that can veto any major policy decisions by Kyiv. The primary purpose of Russia’s military buildup along Ukraine’s borders is to convince the Biden administration to push Ukraine into accepting the establishment of autonomous regions on its territory that would paralyze the country’s Western aspirations. Kyiv’s capitulation to Moscow will simply encourage further Kremlin encroachment on Ukrainian territory.

However, even if another military intervention is postponed, Russia’s autocratic regime will seek to destabilize the democratic Ukraine government through all means at its disposal. In particular, its energy offensive will intensify, and Ukraine is ill-prepared to resist. Moscow is one step away from successfully implementing its plan to bypass Ukraine as a gas supply route to Europe. The construction of two new mega-pipelines, Nord Stream 2 and TurkStream, has been completed. U.S. sanctions failed to stop Nord Stream 2 and President Joe Biden’s agreement with German chancellor Angela Merkel lifted further obstacles to its construction. Should Nord Stream 2 be certified by the German regulator and the European Commission, all Russian natural gas transit will be diverted away from Ukraine. Such development will strip Ukraine from its significance as a gas transit country for Moscow, making it more vulnerable to invasion.

Furthermore, Putin stated in 2019 that once Nord Stream 2 is operational and Gazprom no longer uses the Ukrainian route, the country will not be able to receive Russian gas supplies in reverse from Europe. This statement indicates that Moscow will control how much gas Ukraine’s neighbors receive from Nord Stream 2 to ensure there will be no extra volumes they could resell to Kyiv.

But the energy squeeze is not only on Ukraine’s gas sector. In November, Russia banned coal sales to Ukraine and blocked coal transit from other countries, such as Kazakhstan. Meanwhile, about one-quarter of Ukraine's electricity is produced at coal-fired power plants, and since a significant number of coal mines remain in occupied territories in the Donbas, Ukraine has needed to import coal.

Ukraine has significant capacity in nuclear power generation, which provides more than half of its electricity. However, here too it is significantly dependent on Russia. Most nuclear reactors still run on Russian fuel and the spent fuel is sent back for storage in Russia. Although cooperation between Ukraine’s nuclear operator Energoatom and Westinghouse is gradually expanding, nine of fifteen nuclear power units still depend on Russian fuel.

An agreement signed in September between the United States and Ukraine includes completing one nuclear reactor and building four more; the project will be implemented by Westinghouse and Energoatom. But the deal urgently requires a central storage facility for nuclear waste, a project the American company Holtec has been working on since 2017. However, there are significant difficulties faced by the project and it remains unclear whether government ineffectiveness or Moscow’s interference have prevented this storage facility from becoming operational.

Solar and wind power plants are promising energy sources, which contributes to strengthening Ukraine’s energy independence. In 2020, the share of renewable energy amounted to 7.3 percent of electricity and is growing rapidly. However, the government’s energy policy is plagued with incompetence and corruption that make the country more vulnerable to Moscow. To keep electricity prices low for households and businesses, the government has introduced price caps on the electricity market, which ensure that thermal generation had no money to purchase coal. This affects both the state-owned company Centerenergo and the private energy company DTEK. And although DTEK imported coal (mostly from the United States) and also helped contract coal purchases for the state, Russia is likely to continue using such restrictions to put pressure on Kyiv.

In the next few years, Ukraine will have to reduce the share of coal in its energy mix from the current 35 percent to meet Europe’s carbon-reduction goals. The pandemic’s economic downturn has undercut the government’s incentives scheme and resulted in accumulating debts to companies generating renewable energy. The debts were repaid recently, except for those owned to DTEK, the largest producer of wind power, which controls an estimated one-quarter of Ukraine’s renewable generating capacity.

Unfortunately, as winter approaches and Russia is pressuring Ukraine militarily and cutting energy supplies, President Volodymyr Zelenskyy seems more concerned about currying favor with oligarchs intent on maintaining low electricity tariffs rather than on pursuing critical energy reforms. Perpetual political infighting, media wars between oligarchs, and accusations of domestic coup attempts, together with a failing energy policy undermine Ukraine’s stability and statehood. It will further weaken the economy and foster social unrest that Russia exploits to its advantage. The Biden administration needs to work closely with Kyiv to buttress its energy security and counter Russia’s threats.