On Russia, Joe Biden Has Struck Out 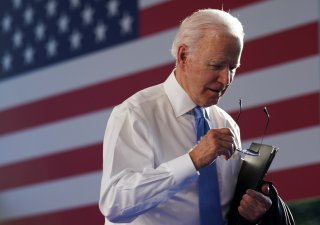 With baseball aficionados seized with postseason excitement, it is appropriate to use metaphors associated with America’s favorite pastime. Even in realms far removed from the baseball diamond, there is always someone keeping score, and “three strikes and you’re out” is still a prima facie case for failure. Any objective scoring of the Biden team's performance in this foreign policy season would be deemed a strikeout. The three strikes involve capitulation on Russia’s Nord Stream 2 pipeline, U.S. prostration to the Kremlin discussions about military bases in Central Asia, and forfeiture of critical minerals in Afghanistan to the Chinese Communist Party. The team that was advertised for its brilliance has been a highlight reel of ineptitude.

Joe Biden ran for president as a Russia hawk, pledging a tough response to the Kremlin’s misbehavior. Yet his administration has been a windfall for Moscow, and energy politics is the first strike. The Nord Stream 2 (NS2) pipeline that connects Russia and Germany is a top Kremlin geostrategic priority. The Trump administration imposed crippling sanctions that effectively stopped its construction. Biden waived these sanctions, to the chagrin of a bipartisan coalition in Congress. Russian president Vladimir Putin has a long-standing friendship with the CEO of NS2 dating back to his days as a KGB officer, which illustrates the importance Moscow assigns to this project. This pipeline will bypass and further destabilize Ukraine, depriving Kyiv of desperately needed transit revenues, and making Europe dependent on Russian energy. Russia derives tens of billions of dollars in hard currency revenues annually from their energy sales, financing much of their malign activity globally, and has a troubling history weaponizing energy flows. You cannot be hard on Russia, as candidate Biden promised, while greenlighting its biggest gas project in a century.

Furthermore, many analysts suspect that the current gas shortage in Europe is attributable to Russia’s withholding of gas from the spot market. It strains credulity that the Biden administration can invoke transatlanticism and yet allow Europe to be held hostage to Russian machinations in the gas market, especially as winter approaches. Moscow is likely playing hardball to gain European Union final approvals for NS2. The Kremlin has been emboldened by Biden's pipeline gift because it is part of a pattern. Poisoning Putin critic Alexei Navalny, forcing a landing of a commercial airliner in Belarus to arrest a political opponent, and massing troops on Ukraine’s border have been met with a shrug of the shoulders in Washington.

So, what explains Biden's capitulation on NS2? He may have felt he owed German chancellor Angela Merkel a gratuitous concession on NS2 on her way out of office. Yet the gambit has backfired due to the results of the recent German elections. The biggest economy in Europe will soon have a new coalition government, including the Green Party, that opposes the Russian pipeline that the U.S. president has just waved through. Let that sink in. Credit to the Greens for a sincere concern about Russian human rights violations, which has animated their resistance to NS2. For the Biden team, human rights appear to be merely a rhetorical device; Putin’s record on human rights was evidently not sufficiently egregious to maintain the sanctions blocking completion of the pipeline.

The NS2 decision is even more bizarre when viewed in the context of domestic policy. The peremptory cancellation of the Keystone XL pipeline and the suppression of the American oil and gas sector have placed energy independence in the rear-view mirror, which redounds to Putin’s benefit while also damaging our national security. Russia has more than doubled its U.S. sales since Biden took office, and the United States is now the single-largest customer for Russian heavy-oil products. Only in the warped world of Washington can a White House ostensibly wanting accountability for Moscow become its biggest subsidizer.

One might ask if there was a strategic element to the NS2 drama: did the United States receive something in return for this abject surrender? On the contrary, when U.S. officials approached Central Asian countries about U.S. basing opportunities to provide over-the-horizon capabilities relative to Afghanistan, Russia indicated it would not tolerate U.S. military installations in Uzbekistan or Kyrgyzstan. Moscow even had the temerity to offer that U.S. troops co-locate on Russian bases in Central Asia, an idea that Biden officials reportedly took under advisement. Imagine for a second if the previous administration had entertained the placement of U.S. troops on Russian bases. Apoplexy would have been demonstrable among the foreign policy elites.

The Chinese have also found ways to extract leverage from Washington's incompetence. Look no further than the Afghanistan withdrawal. One aspect of the shambolic pullout that needs more coverage is the residual rare earth mineral sector, estimated to be worth between $1 and $3 trillion. These minerals are vital for the energy transition, including electric vehicle manufacturing, and within days of the U.S. departure the Chinese government was making overtures to the Taliban on joint venture mining projects. The Biden foreign policy leadership forfeited these valuable reserves free of charge to Beijing. Like the Russians, the Chinese are benefiting from Biden’s weakness on NS2, as Germany’s Port of Mukran on the Baltic Sea where the pipeline materials are stored figures prominently in Beijing’s Polar Silk Road. This is sadly predictable for an administration pushing an infrastructure plan and green energy initiatives that rely on Chinese solar panel production. In this era of great power competition, the Biden administration needs to be called out on its three strikes in pipeline politics, military basing, and mineral resources.

Russell A. Berman, Senior Fellow at the Hoover Institution, served as Senior Advisor on the Policy Planning Staff of the State Department.

Ricky Gill served as Director for European Energy Security at the National Security Council and was previously Senior Advisor in the State Department’s Bureau of Overseas Buildings Operations.