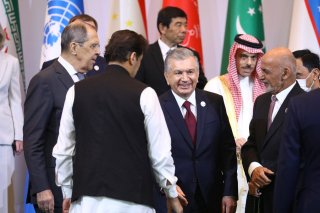 The future and the past clashed at a fascinating conference that Uzbek president Shavkat Mirziyoyev convened in Tashkent July 15-16: The Central and South Asia Summit on Interconnectivity. The event brought together heads of state and governments, ministers, and other senior officials from the two regions, as well as from major outside powers including China, the EU, Russia, and the United States.

A Bold Vision for Central Asia, and South Asia

The summit played off perhaps the most significant development in Central Asia in recent years: the initiative of Mirziyoyev to establish cordial relations with his neighbors and to actively pursue closer economic relations and even integration in the region. Since Uzbekistan sits in the very heart of Central Asia and has the region’s largest population, this policy was bound to have a large, positive impact. And so it has: border issues have been resolved, communications and transportation links developed, and intra-regional trade spurred.

The purpose of the Central-South Asian Summit was to take this concept one step further: to promote economic cooperation with the nations of South Asia and to build a transportation system through Afghanistan to take Central Asian goods to ports on the Indian Ocean. Central Asia may be the center of the great Eurasian landmass, but it is fully landlocked and far from the sea, which is an economic disadvantage. Building highways and railroads to the closest blue water ports will jump-start the economy of the region.

Mirziyoyev laid out his vision for a promising future in a comprehensive speech to launch the Summit, and those themes were echoed by many of the luminaries attending. But this bright picture was sadly only one of the two main themes dominating the proceedings.

The other was the specter of the past nearly half-century of turmoil in Afghanistan. To realize the vision of a great transportation corridor connecting Central and South Asia, Afghanistan must be a stable country living in peace with its neighbors. But with the United States and NATO departing the country, the Taliban is gaining ground quickly.

While Afghan president Ashraf Ghani retains a larger and better-equipped military than his Taliban foes, the Taliban's gains are coming steadily and in areas like Badakhshan, where they had no control when last in power. Indeed, the various groupings of the old Northern Alliance, which effectively kept the Taliban out of most of northern Afghanistan a generation ago, were heading to Doha to negotiate with the Taliban after the conference. U.S. Envoy for Afghanistan, Zal Khalilzad, also took off for Doha after attending the conference.

None of this was lost on the summiteers in Tashkent. Flying in from Kabul, Ghani spoke right after Mirziyoyev and gave a sober, but not pessimistic description of his efforts to stave off the Taliban. He noted that this task would be much easier if Pakistan stopped supporting Afghanistan's enemies. This provided the main drama of the Summit, as Pakistan prime minister Imran Khan followed Ghani to the podium. Free of Pinocchio’s peculiar medical condition, Khan without embarrassment assured Ghani and the audience that Pakistan was not supporting the Taliban or interfering in Afghanistan.

The prospect of years of war in Afghanistan or a Taliban victory is not what the Central Asian states want. But they are nothing if not realists. So they are hedging their bets to enhance their security. They maintain proper contacts with Ghani, as President of Afghanistan, but have reached out quietly to the Taliban. They want to know if a second Taliban regime would repeat the practice of its predecessor and provide a base for Central Asian extremists. While the Taliban are privately saying they have learned from past mistakes, their harsh treatment of captured Afghan special forces indicates they have not mended their old ways.

The possible threat from a Taliban-controlled Afghanistan may also provide opportunities for Russia and China. Moscow shares the concerns of the Central Asians in stopping the spread of Islamic extremism into the region. But it would like to use this to expand its security presence in Central Asia.

China talks the same game as Moscow, but its play is more complicated. China could in fact exert a clear, positive influence in Afghanistan by leaning on its long-term ally Pakistan to stop backing the Taliban. But it welcomes the chaos in Afghanistan that brought the withdrawal of NATO and U.S. forces. And while it has worked with the Ghani government to grow its economic footprint in the country, it will be well-positioned to do the same and perhaps more if the Taliban win. Beijing would shed only crocodile tears if a new Taliban regime sparked an upsurge of terrorism in Central Asia. Weakening the Central Asian states only makes them more susceptible to eventual Chinese influence. China has not hidden its territorial claims on some of its Central Asian neighbors.

The understandable U.S. decision to withdraw has set all of this in motion. While not happy about that decision, the Central Asian states have adjusted to it and would still welcome a U.S. contribution to security. Senior officials from Kazakhstan, Tajikistan and Uzbekistan have come to Washington in recent weeks to discuss this. The U.S. delegation to the Summit led by White House Homeland Security adviser Liz Sherwood also took this up in Tashkent.

What the U.S. contribution will be is still to be determined. But Washington does have a strong interest in maintaining security in Central Asia and not leaving the area to the influence of Beijing and Moscow. It is also true that American and Russian interests at least partly overlap. Both want to stop the spread of extremist Islam in the region and to contain the influence of a rising China. The recent news that the Kremlin has offered its bases in Central Asia for possible American use suggests this is understood in Moscow.

This is worth exploring. The Central Asian states would be reassured if the United States and Russia were to work together in helping them manage their security concerns coming from an aggressive Afghanistan. But we need to do this carefully. We need to talk directly with Moscow, but also with all the relevant Central Asian states: Kazakhstan, Tajikistan, and Uzbekistan. We need their buy-in. We do not want to do this as a U.S.-Russia condominium presented to (imposed on) the Central Asians. We also might want to be careful about using Russian bases.

What might this joint effort look like? Helping secure the borders of Uzbekistan and Tajikistan with Afghanistan is key. The same is true, if Ashgabat is interested, regarding the Turkmenistan-Afghanistan border. Appropriate measures might include intelligence sharing, electronic monitors, and drone overflights.

Overall, Kremlin revisionist foreign policy remains a major challenge to the United States. And we must push back hard against this challenge in Ukraine, the cybersphere and elsewhere. But that does not prevent us from working with Moscow where our interests overlap, and such cooperation may help the Kremlin understand over time that ultimately its efforts to undermine the international order do not serve Russian interests.

John Herbst is the Director of the Eurasia Center at the Atlantic Council and formerly U.S. Ambassador to Ukraine during the Orange Revolution.